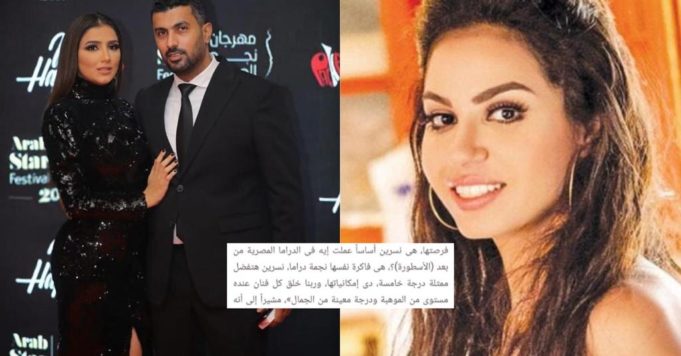 Do you remember, 3 years ago, when Director Mohamed Sami and actress Nesreen Amin had this huge fight during the making of their famous TV series “El Ostora” ?

Apparently, the flames of that fight never died. Because just recently, Mohamed Sami was interviewed by El Watan newspaper and he had some serious stuff to say…

When asked about the fight from the past, Sami seemed to hold on to that grudge. He answered saying that Nesreen Amin waged war on him back then because she was jealous of his wife, Mai Omar.

After he deleted many of her scenes in the show in favor of his wife. The thing that he denied and didn’t stop at the “jealousy card”, but went even further calling Nesreen a fifth class actress who has no real worth in the business.

He went on calling her names like “lacking talent” and even “ugly.” The thing that provoked Amin, and made her reply to his hateful speech on her Facebook page.

Fights aside, what we felt was more intriguing and must be questioned are the words Mohamed Sami used to describe a fellow actress.

We all know right from wrong, and we doubt anyone could fail to see Sami as guilty. But there’s a bigger picture here, people!

When did it become okay for a renowned cinema director like Mohamed Sami to classify an actress, whom he worked with and who happens to be a good one too, as “fifth class” on a national newspaper?

Are we seriously in an era where we still classify actors as first class, second class…etc?

People like Mohamed Sami are the ones who could launch someone’s cinematic career or end it. If that’s the kind of mindset Egyptian directors adopt, how in the world are they going to give a chance to new talents?

In another statement, Sami said how Nesreen is nothing but another version of actress Aysha el Kilany. Referring to how she’s nothing but an extra or a “compars” in his words!

Last time we checked, any respectable director can see the potential in any given actor. And one thing we know for sure, they shouldn’t, under any circumstances, classify or stereotype them!

Finally, we would like to advise Mohamed Sami to contemplate his recent statements and to reconsider the message he is sending out there. Keep it classy, folks!