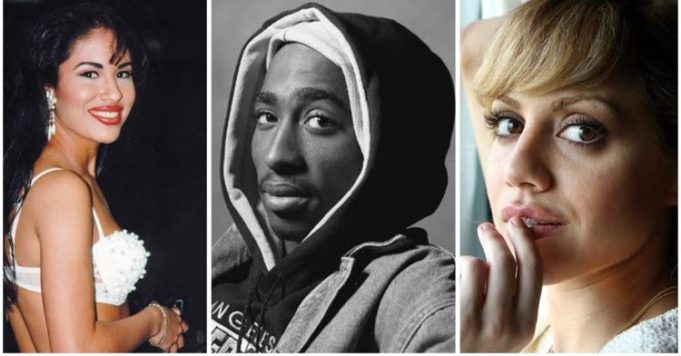 We all remember the famous term “The 27 Club” that refers to celebrity members who all died untimely aged just 27, right? Well, looking at the showbiz industry, there are many more weird deaths under 40 years of age. Here are 6!

The renowned African American rapper died mysteriously at the age of 25. Who did it? No one knows until this very day. He was shot after leaving a boxing event in a drive-by shooting in Las Vegas!

Although the police claim it’s suicide, theorists and die hard fans believe otherwise. After his 1994 death, people heavily blamed his wife Courtney Love and accused her of faking his suicide. Why? No idea!

The Uptown Girls star died mysteriously in her house in 2009 at the age of 32. The report said “Pneumonia” but when her husband died the same way 5 months later questions were heavily raised.

The Latin singer that rose to international fame in no time was killed by her fan club manager at 23. After discovering her corruption, Selena fired her and as a response she held her at gunpoint then shot her dead!

Did you guys know that Whitney Houston’s daughter, Christina Bobby Brown, died exactly the same way her mother died? By drug intoxication and drowning, how spooky is that?

The latest mysterious death of the 21st century is probably that of Glee’s superstar Naya Rivera. She drowned in Lake Piru after a swim with her 4-year-old child. Her body was found five days later and the reason of her death remains unknown!

Which one do you find the weirdest, guys?