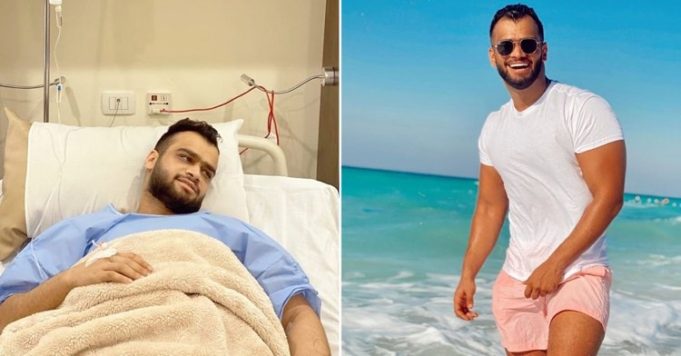 About 3 days ago, the terrible news hit social media rather hard. It had to do with the sudden illness of Moustafa Hefnawy– a social media personality. Now there are many reasons as to why the illness of one individual is creating a huge wave of shock and sadness and that’s what we’re about to tackle here.

It is most likely that you all read the news by now but many still didn’t fully grasp what happened or what the backstory really is. If this applies to you, here is the full story of negligence that may have cost this young man the best years of his life!

So, what’s the exact timeline that led to such a tragedy?

According to his friends and his posts on social media, Moustafa was more than fine a day before the incident. One morning- believed to be on the 5th of August– he felt a severe right-side pain and drove himself to the nearest hospital.

Upon arriving to the hospital, the medical staff failed to diagnose his condition for what it is (a stroke) and ordered an x-ray as they thought it’s just colitis. He was then left unattended for about 6 HOURS and when the time came for his x-ray, he had already started to lose consciousness.

Still, the medical staff failed to follow the right procedures. It wasn’t until his friends resorted to the medical consultation from an external source that it was confirmed Hefnawy was in fact suffering from a stroke.

By that time, his condition had already deteriorated big time to the point where his scans showed that the left part of his brain was entirely damaged. If you don’t know what that means, this could be an indication of a partial-body paralysis.

In other and simpler words, Moustafa, this twenty-something guy may never be able to move his right hand or leg ever again, yes let that sink in.

Hundreds if not thousands suffer the catastrophic outcomes of medical malpractice in Egypt. So it is no surprise that a public figure would suffer from the same fate. The only difference here is the amount of media attention it gets, which we think is a good thing!

Medical mistakes happen all the time. The medical crime against Hefnawy, however, is inexcusable. He was immediately hospitalized and he was showing text-book symptoms. Unfortunately, it only went downhill from there.

Now, almost everyone on social media is sending prayers for the speedy recovery of this dear friend and stranger. Celebrities are heavily joining in too. Here’s a picture of Tamer Hosny consoling Hefnawy’s mother and offering help in his journey to recovery.

We, the Identity team, would like to express our deepest sorrow over the news. We wish Moustafa a full-recovery and wish whoever took part in his tragedy would face legal responsibility.