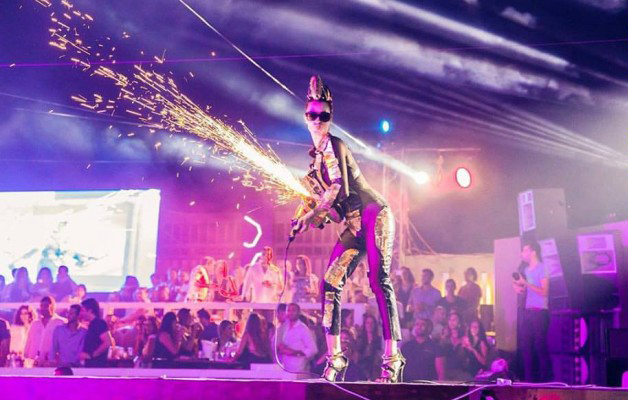 Concerts and other musical events are infamous for drawing all sorts of people. Sometimes the most entertaining part isn’t even the music itself, but are the characters that run and attend the shows. Here are some funny experiences our readers had when trying to enjoy the music scene.

“I was helping organize an event at a club when we noticed the DJ wasn’t on the stage, but the music was still playing. We couldn’t find him anywhere until the bouncers told us he had snuck out to an ahwa around the corner to grab a quick shisha while he controlled the music from his phone.” A.H., 31

Whatever you do, don’t be a poser

“I once saw a guy get denied entry to a metal concert because he was wearing a Nirvana t-shirt. At first I thought the people at the door were joking, but they actually didn’t let him in even though he had a ticket.” R.S., 24

“Way back when Elissa was still a new singer, I went to one of her concerts. It was super crowded and everyone was standing. During one of her songs the guy next to me started chanting “Elissa! Elisa!” then fainted. An ambulance had to come take him away. I’ve never gone to a concert since.” M.A., 27

And some people can’t handle themselves

“There was this one time at a concert some guy asked a friend of mine to tell him when the beat got really good so he could inject himself with God knows what. My friend was like, “sure bro,” and we just went to the other side of the concert.” M.C., 21

There’s only one shade of metal

“One time a guy got into a fight with me because I was at a metal concert and I wasn’t wearing black. “This is a metal concert, you have to wear black!” he kept insisting. I was wearing grey.” A.A., 20

We guess she was more flat than sharp

“I was singing with a new band for the first time, so I asked the girl singing with me where she would start the song from, meaning which note. She looked at me like I was stupid and answered, “from the beginning to the end!” S.R., 22

All tied up at the Opera

“I went to one of Omar Khayrat’s concerts at the opera with my friend. He had dressed up but forgot his tie at home. They wouldn’t let us in at the door unless he had one on, so he had to rent one from the ticket booth. It was one of the most ugly ties I’ve ever seen. It was super wide with horrible red stripes. He was so mad because it didn’t match and looked really, really bad. So as soon as we were in he took it off, but then the night turned into a game of hide and seek with the security. Every time they came around, he would either turn around and hide or throw it on super fast, only to rip it off as soon as they were gone. It was hilarious!” R.S., 27

“I went with my friends to what was supposed to be a rock concert, only to find that the stage had been accidently switched with a classical performance at the same venue. So the older crowd found themselves in front of the rock band, and we found ourselves in front of classical music. It was awkward for everyone.” A.M., 22