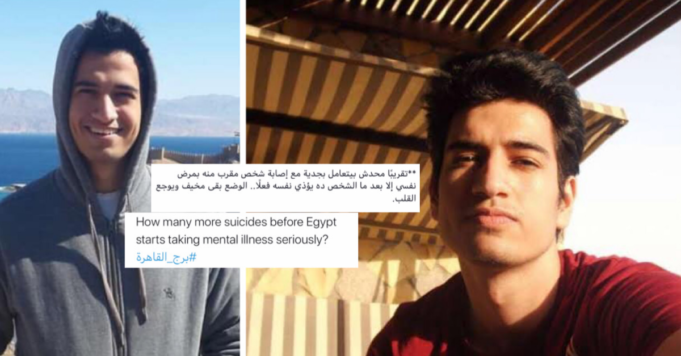 On December 1st, news spread about an Egyptian university student with the name Nader Mohamed who committed suicide jumping off the Cairo Tower just the night before.

With the heartbreaking video – that SHOULDN’T be shared – going viral everywhere; people have been digging more into the story and a lot of sources have been reporting that the young man was suffering from severe depression.

Not only that, many news outlets as well as social media posts are claiming that Nader has been battling his demons for quite a while now – with the people around him being well aware of his sensitive condition.

Allegedly, Nader has also been voicing his thoughts about committing suicide for sometime, especially to his mates.

And as some of us might have seen in the video by now; it was very clear that Nader was waiting for the moment his friend looks away in order to actually hurry and get it over with.

He didn’t even want anybody to save him at this point.

But now that he’s dead, now that he had actually done it…The question is; when will people start taking mental illness and calls for help – in any form – seriously?

When will people start being THERE before it’s too late? When will people realize that being under too much pressure, or going through some problems or being in a bad state of mind – even for sometime – could actually lead someone to the decision of taking their own life?

Do you think suicide thoughts just come like that in the heat of the moment? Do you know what they actually require? Do you even have any idea what this one person had gone through in life for him to reach the conclusion that this is the only solution?

It comes when the person sees no way out anymore and it comes when he reaches the darkest place inside his own head.

It’s far from easy and it’s not ‘giving up’ like many would like to refer to it.

Some people like to use the words “Nothing is worth it,” in such situations. As if the person who took his own life didn’t think about that before he made his decision.…

But you know what’s not worth it? Convincing your friends that they’re being dramatic, belittling their problems, telling them things like “Your life is much better than a lot of those around you”, “Be grateful”, “Just pray”, “We’re all going through the same thing”.

And even worse, not taking their suicidal thoughts seriously and thinking they’re being dramatic.

Please look around you, take care of each other, look out for your friends and family members, BE THERE, just please BE THERE!

Try phrases like “I’m here for you“, “You’re not alone“‘, “You’ll get through this“, and mean them! Try to let them seek professional help.

If you’re well aware that your friend, your cousin, your sibling, or any family member is going through some stuff, then don’t ignore them.

If any of them ever tell you about their suicidal thoughts, THIS ISN’T A JOKE. Letting them be and thinking they’re just being dramatic or are not being serious could end in many horrible ways, the worse of which is their actual death.

Sometimes we don’t see the cries for help until it’s too late, because we were either too blind to see them or are completely unaware of the dangers of mental illness and how suicide could occur for multiple and unexpected reasons – at anytime and to those who are supposed to be the closest to us.