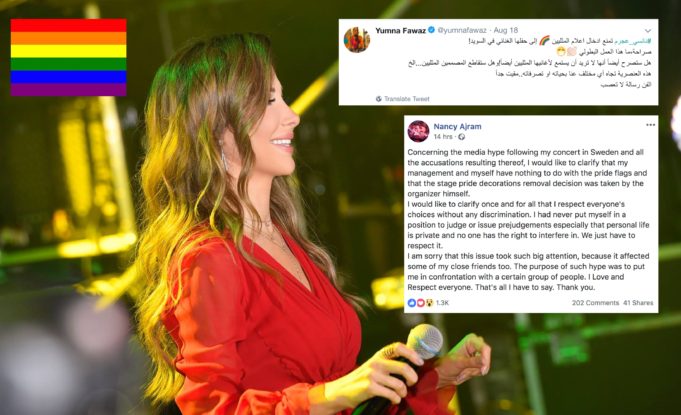 Lebanese singer Nancy Ajram stirred quite the controversy during her concert in Sweden which took place on August 17th. Many of the star’s fans were waiting for an unforgettable night, which they have gotten, but not in the way they expected.

The concert was set in the city of Gothenburg in Sweden, which happened to be celebrating Europride 2018 during the same time. In celebration of the event, the stage was filled with LGBT+ pride flags.

In reaction to the pride flags, Ajram’s manager, Jiji Lamar, asked the organizers to remove the flags from the stage and ordered security to ban fans from entering the concert with the said flags.

Nancy Ajram received lots of backlash from both the LGBT+ community as well as the supporters for hypocrisy – especially since Ajram has been considered one of the Arab gay icons and she has been subtly grabbing to the LGBT+ community through many of her music videos and statements.

What about your music video for ‘Ya Salam’ ? Did u forget the drag and the gays in the video? @NancyAjram you’re a piece of shit u don’t have the right to ban people from entering your concert with the 🏳️‍🌈 flag #NancyAjramIsOverParty

Others showed support of the banning act and thought it was the right thing to do.

On the other hand, Ajram received support for her actions as well.

Days after the backlash, the singer decided to face the criticism and denied that she had anything to do with the incident over twitter.

In her tweet, Ajram stated that she believes in the freedom of choice, and she never asked for the flags to be removed or banned.

She also shared the post of the concert organizer where he apologized for this discriminatory act.

Later, Yumna Fawaz, a Lebanese news reporter who first reported about the incident, stated that she got that part of the story from friends who were also Swedish journalists.

This is not the first time an Arab singer faces criticism for an LGBT+ related issue. The biggest issue in Egypt recently was during Lebanese band Mashrou’ Leila and Sharmoofer’s concert, where the Egyptian LGBT+ community went to celebrate with the band.

Mashrou Leila got banned from Egypt, and the fans who had the flag during the concert were mostly jailed, with some even seeking asylum in the US.

However, the only country that was an exception was Lebanon. The community itself is more tolerant to LGBT, even though the law still prohibits any LGBT activities. As activists have been playing a huge role in the community.

The difference between how Lebanon and Egypt react to LGBT+ issues, however, showed the most during the aftermath of this country; where Mashrou’ Leila fully supported their fans, but Sharmoofers cleaned their hands of the issue and posted on their social media that they are against the acts and do not support it.