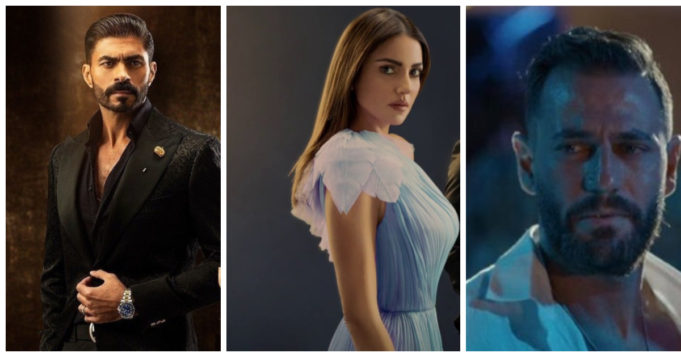 It’s been a hot minute since we last sat in front of a TV screen to watch and follow a series. Let alone an Arabic one. Since most of us are pretty much sucked into Netflixing, nowadays.

We could safely say that the 3rd season of “Naseeby w Esmetak” was actually the only thing worth watching on TV the last couple of months .

However, we want you to go find a comfortable spot on the couch right now because we just found you a brilliant new Arabic series to get sucked into!

“Bela Dalil” should be the newest addition to your daily watch list on CBC Egypt. The series is starring Khaled Selim, Nicolas Mouawad and Dorra. It’s also written by Engly Alaa and directed by Manal El-Seify.

We watched the first couple of episodes that were just released earlier this week and here’s why you should start getting in line too:

“Bela Dalil” holds a very cryptic and mysterious storyline. You could sense the mystery and upcoming twists in every scene already. From the first minute of the first episode you suddenly find yourself in a puzzle waiting to be solved and put together.

Only a couple of episodes have been released so far. However, we could already tell how this series is giving us a murder mystery to solve and so many more! So that’s definitely something you should tune in for!

As you click on the first episode, you’ll find Nicola Mouawad who’s already perfecting his role as “Taymour” – but we’ll talk about this later – giving the viewers a quick tour around the big house party that has all the main characters he introduces in just a few minutes.

If that isn’t already quite an attention-grabber, we don’t know what is!

Also, this makes us notice how this series is already very well written since Engy Alaa, Youssef El-Sherif‘s wife, who’s also the one behind his successful 2017 series “Le3bet Iblis“, is behind this one too!

As you might’ve already seen in the intro scene of the first episode; Lebanese actor Nicola Mouawad was the narrator as he introduced the viewers to all the main characters in an amazing way.

But if you kept watching, you would’ve also noticed the way he stole the show. He showed us extreme and mixed emotions in a perfect way just in a couple of minutes and in one episode!

We honestly can’t wait to see more of him and how his character as well as the story itself progress!

Who doesn’t love those good old love triangles that add a different spark to whatever storyline? Well, basically nobody! Which is why anyone watching “Bela Dalil” would be intrigued by and sucked into the strange and intense love triangle between Omar, Habiba and Taymour!

“Bela Dalil” reminds us of those soap operas that present so many dramatic events related to family and friendship betrayals and secrets waiting to be cracked and revealed. Like, think of that mix with the Agatha Christie murder mystery vibes; perfect combination!

What are you waiting for? Come on, get in line; go watch “Bela Dalil” and enjoy the mysterious atmosphere and solve it! Also, don’t forget to share your thoughts with us.