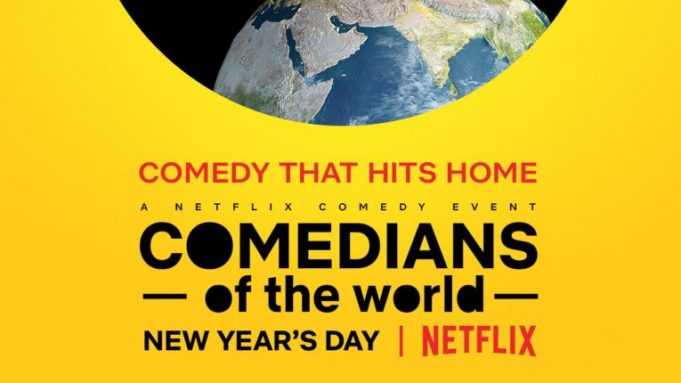 The international language of laughter has started on Netflix, folks! Brace yourselves for the giggles.

COMEDIANS of the World, a new stand-up series from Netflix that is bringing together 47 comedians from 13 regions in 8 languages has started this month.

Identity: Who are the comedians who inspired you and got your foot into the world of Comedy?

Ibrahim: Dave Chappelle without any doubts.

Rawsan: Personally, anyone who can make me laugh is an inspiration to me.

Adi: Dave Chappelle for sure, and there is also George Carlin, Richard Pryor and Bill Cosby.

Identity to Rawsan: How did you manage to break through the lines of male comedians and earn yourself a spot in the Comedy field in the Middle East as a female?

Rawsan: It sure was a challenging thing to achieve; I like to think that it is because I am a woman that I managed to do that. The type of topics I choose for my sets are all women related, and it’s hard for a male comedian to speak for women, ergo I found the right spot for me.

Ibrahim: When my wife knew that a female comedian was joining us in the series, she was so excited and told me that this comedian would probably be the best between us. We attended Rawsan’s show, and both me and wife were shaking with laughter the whole time. Rawsan’s topics might be about women, but they definitely will meet appreciation from both the male and female audience.

Identity to Ibrahim: Speaking of topics, in one of your sets you talked about bullying, and how you got bullied while in school, do you make it a point to highlight such vital topics in your sets?

Ibrahim: What I really wanted to highlight in there was how I turned the fact that I was bullied into my favour; how I didn’t stop at it. Yes, sure I tend to include such issues in my sets but not in an obvious way. I like to slip them in between the jokes because I don’t think me lecturing people about something will help that much, but if I wrap it up to them in a nice story, the message will be even louder.

Identity to Ady: Can you tell us more about your meeting with Bassem Youssef?

Ady: Dr. Bassem is such a great man, I admire him highly as a person and as a comedian. I am so grateful to how he helped me out when I was in Amman and the opportunities he offered to me in the start of my career. When he attended one of my shows I was so nervous, I wanted to prove myself to him, so when I was performing on-stage and saw him laughing hysterically that was one of the greatest moments in my career. I was so moved when he came to me after the show and told “You were brilliant!”

Identity: For longer sets, how do you all remember your material? Do you keep notes on stage just in case?

Rawsan: I learn all my sets by heart! I recite them over and over to my parents, my friends, or whoever comes my way while I am preparing. It works much better for me than notes. Notes make me nervous. In my opinion, in stand-up comedy you must feel the sentence in order to deliver it to the audience the right way, so reciting them before the show helps me do that.

Ady: For my Netflix show, yes, I do just like Rawsan, I know what I am going to say exactly and the order of the jokes. But for any other show, let’s say if the show is a 30 minute one, I only know what I am going to say in the first and the last 5 minutes of the show. I have a stock of jokes always prepared inside my head, and according to the type of audience I fill in the gaps with the jokes that I know will suit this audience. I fear if I know everything by heart, I will ruin the flow of the show.

Ibrahim: If it’s going to be a recorded episode, yes, you definitely must memorize the whole thing, and no improvising, but if you’re in a comedy club for instance, yeah, you can do whatever you want, you can even come up with jokes on stage.

Identity: You all always use personal stories in your shows, are they real stories or made up ones for the sake of making people laugh?

Rawsan: Yes, they are real stories, but of course we spice them up. I try as much as I can to keep it real.

Ibrahim: It’s fifty-fifty for me, everyone loves a bit of fiction after all, it adds flavors to any story.

Ady: In the roots, they are all based on true stories. I take only the seed of the story, a moment in my life, a random situation or conversation and spring from that.

Identity: We thank you guys for such a delightful interview and wish you all the best.