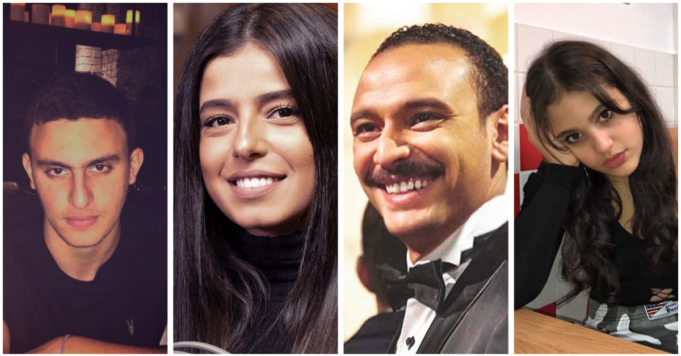 From Ahmed Helmy and Mona Zaki to Ahmed El-Saka, Sherif Mounir and even Amr Diab; Egypt witnessed a lot of incredible singing and acting talents that stole the show over the past 20 years.

But it’s only during the last couple of years that we’ve also seen their own children stepping into the entertainment scene and already leaving a mark. It’s true that not all of them are actors and singers, but they sure are talented in many ways!

Khaled Mounib is the nephew of the late great artist whom we all loved so much, Amer Mounib. In 2018, he debuted with a beautiful tribute to his late uncle “Mafeesh Kalam Yet2al“. And he picked up from there with a couple of hit songs, “El-To2l Mazag” and the most recent one “Nawily 3ala Eh“.

A month ago, Mariam Mounib stole everyone’s heart with her unique tribute to her late father, Amer Mounib. Mariam released a duet that’s combining her voice with her dad’s in one of his most popular hits “3amel Eh F 7ayatak“. We can’t wait to listen to more of her beautiful voice in original hits!

Honestly, we don’t think this one needs an introduction; he looks exactly like his late father, Khaled Saleh, who was a brilliant actor of course. Ahmed starred in a number of series in 2019 including “Abo Gabal“, “Zodiac“, “Qabil” and he even made an appearance in “El-Fil El-Azrak 2“. We could already see a bright future ahead of him!

Yassein El-Saka is Egyptian actor Ahmed El-Saka’s eldest son, and apart from the incredible resemblance; Yassein is an aspiring actor and scriptwriter who took part in a couple of plays and short movies and is currently working on a short movie titled “Blue Boy“. It’s worth mentioning that he portrayed a younger version of his father in “Ibn El-Konsol“.

Mona Zaki and Ahmed Helmy’s daughter Lily is taking a different path and starting her career at a young age with some handmade crafts as she paints artistic pieces on bags and clothes. Go Lily!

By now, we think a lot of people are already familiar with Amr Diab’s youngest daughter, Jana. Jana Diab has an angelic voice and has been posting Instagram videos of her signing covers and creating original content too!

Menna is the daughter of the contracting committee advisor of Al-Ahly Al-Masry, Adly El-Kiey. Menna has a great talent as she’s a lyricist who worked in a big number of ad campaigns and projects including Sharmoofer’s 2019 AFCON U-23 opening ceremony song, Uber 2019, Orange Ramadan 2019, Etisalat Ramadan 2017 and more!

Handy Mehanna is the daughter of famous Egyptian musician, Hani Mehanna. Hanady had already starred in a number of TV series including “Hekayti“, “Zelzal“, “Baraka” and more. The young talent is currently working on the anticipated Rom-Com “Banat Thanawy“!

Asma is Egyptian actor Sherif Mounir’s daughter who is now becoming an internet personality/influencer with over 1 Million followers due to her passion for fashion, beauty and lifestyle. Asma has a skincare line in collaboration with Urban Ducks Cosmetics, and is also a TV presenter in ONTV hosting the show “Ana w Benty” along with her father.

And there you have it! Seems that the next generation in the Egyptian entertainment scene is very promising already. We can’t wait to see all the names on the list in bigger productions to enjoy more of their undeniable talents everywhere!