Identity Magazine
Home Trending A Nurse Takes a Newborn Out of an Incubator for a TikTok...
Facebook
Twitter
Google+ 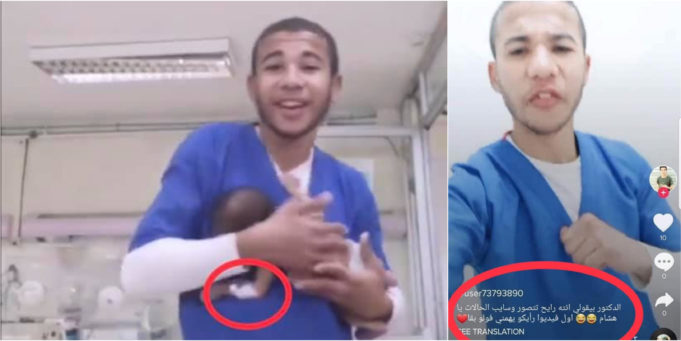 Just when you think people won’t sink any lower as they attempt to get some social media clicks, they surprise you. The latest social media disaster shows a nurse taking a newborn baby out of his incubator with a cannula in his hand to lipsync to a TikTok video.

Yes, a newborn baby. With a cannula sticking to him.

The nurse is shown dancing with the baby – of course without wearing any gloves or masks – and proceeds to kiss the newborn.

While I’m not a health expert, I’m certain newborns should not be out of their incubators, not shaken to dance to the tunes of Amr Diab, and certainly not touched and kissed by someone who we can only assume is unsanitized. Moreover, we highly doubt any parent’s consent was taken before the video.

The man also “jokes” in the caption, stating that the doctor has called him out for leaving the patients and shooting videos. The nurse thinks this is funny, and the doctor is allowing it.

The video has been reposted on social media in an attempt to call out the man in the video. Other than that, those who reposted the video have been using the platform as an appeal to the Minister of Health to take firm action against the nurse and the hospital.

No official response has been released from the ministry as of the publishing of this article. With that said, the issue is much bigger than an individual case.

People have been doing anything they can to gain any digital fame, and the issue doesn’t seem to be slowing down.

Just a few days ago, a woman shot a ranting video accusing a supermarket’s employee of not allowing her to take a picture at the store, without thinking of how her actions might have affected the employee. Luckily for him, his employers stood by his side. Other working places, however, could have fired the said employee in order to save themselves from the backlash.

Some cases are even worse. Last December, a girl accidentally took a selfie while having a girl jump off a bridge behind her, yet she still made the post about herself. She even went as far as to “troll” those who criticized her and made memes about herself.

Those are just two different cases of those using social media to gain any type of attention, and it’s getting out of hand. You can take action against those who do that, but that still does not teach people apathy.

Apathy isn’t just lacking from those who create such content, but from many people on the internet as well. Another interesting case is the Saudi man who almost killed himself after becoming a meme. Even after his appeal, people still bullied him.

Regarding this nurse, disciplinary action should be taken against him and the hospital. Yet this will not change how apathetic people have become, and how detached from reality we’ve all become.