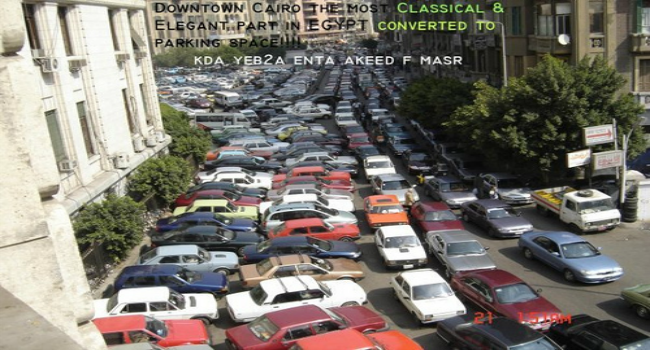 You come across him in every other street- whether it’s a main road or just a side street. You hear his loud whistle and you endure his frantic hand gestures while you try to park your car in this country’s messed up, cluttered up, jammed-till-the-end-of-time streets. He’s the product of a society whose most of its social classes are both under-educated and underpaid. He is the ‘sayes.’

While, yes, it is quite normal to come across valets in certain venues’ parking lots abroad, never will you come across a guy who hogs streets which are, in reality, public property, and forcefully attempts to fish out a few bucks from you for parking in the area he’s managed to somehow take over.

Being a ‘sayes’ is essentially a job that utilizes no human talents or capabilities, neither does it, in actuality, benefit society in any way. It is pretty much a away to make cash out of offering an almost pointless service, because at the end of the day, most of us can more or less park our cars on our own.

Thus, when money is paid for no actual benefits in return, a societal problem will arise. That issue, however, can never be blamed on any person who chooses to become a self-proclaimed “sayes.” The dilemma that is really on hand is that some people are being driven to occupy that post, simply because they feel like they are being given no other choices.

The real alarming problem is the fact that living in the capital is becoming harder day by day, given the rising prices and staggering inflation rate. The real problem is that most people are not being given proper education that would empower them with the knowledge needed to land decently paid jobs.

According to the UNICEF’s and CAPMAS’ 2013 statistics, almost 26%, which translates to 17.2 million, of Egyptian adults are illiterate. Moreover, according to CAPMAS: 56% of Egyptian children are living in poverty; as of May 2015 Egypt’s inflation rate is 13.5%; Egypt ranks as the 110th country (out of the world’s 196 countries) in Human Development (the Human Development Index basically measures a nation’s success in economic and societal matters that would affect its population’s quality of health, education and overall standard of living).

Another problem is that most of us are unaware of these statistics, because they are, ladies and gentlemen, not what they teach our children in schools or publish in newspapers. They are not what clutter up our Facebook newsfeeds and Twitter timelines.

On an ending note, if these statistics are an indicative of anything, they are blatant evidence that the ‘sayes’ is merely the result of years and years of societal injustice. He is the result of poor education that leads to no options for any possibly fulfilling careers which leads to an inadequate lifestyle and an urgent need to make-do in any way one can just get by. He is the result of a perpetual poverty cycle. The question I’ll leave you with though: how can we break this seemingly chronic cycle?