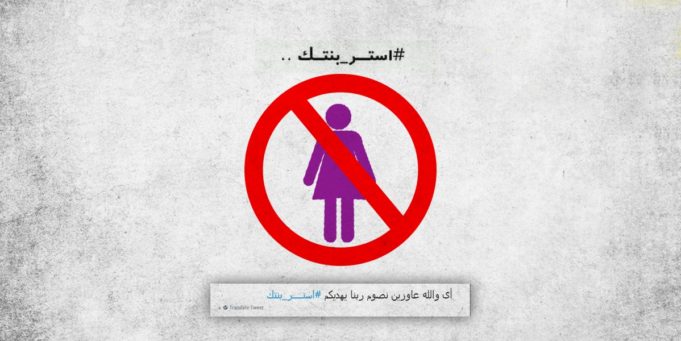 We all have our different ways to welcome the holy month of Ramadan; whether by putting up festive decorations or making plans to better connect with our spiritual side during this short 30-day-window.

But apparently someone out there thought the best way to prepare for the holy month is to create a social media campaign where he can humiliate all women, and all mankind basically.

This campaign is called “#Ostor_Bentak #5aly_El_Nas_Tesoom” which roughly translates to “cover up your daughter so people can fast”.

Yes, take a second to soak that in…

There is no way to know for sure who is the deeply disturbed mind behind the creation of this infamous hashtag.

As for the when, after doing a little digging, we discovered that it is not actually new, that it was created before last Ramadan but didn’t make quite the fuss.

But before Ramadan this year, someone thought to bring it back to life, and it ended up making a bigger buzz across social media than it did when it was first created.

And a lot of people (mostly men) were standing behind it…

Why this is worse?

The fact that this campaign is not new yet is thriving and trending is scary, because it means that it is not just a time-bound trend that lives for a short time then disappears like most social media trends. It means that it is turning into some sort of a routine or a habit, or worse, a culture!

Why is this even a thing?

This is the question to which we can’t find an answer, or more like we can’t find a non-disappointing answer. However, because it is our job to show all sides of the conversation, we decided to “explain” it all and leave the decision to you.

The “justification” supporters of this campaign-which are almost exclusively men- build their point of views on is that women’s clothes or the way they dress make it hard for them (men) to fast during Ramadan.

So they (men) are requesting of fathers (also men) to “cover up their daughters up” so they (men) can fast in peace.

So to recap here are the three grounds on which this argument is built:

1. Men cannot control their sexual instincts and are sexually triggered by the mere sight of a woman. And that is acceptable.

2. A woman has no control over anything in her life whatsoever, up to and including what she wears. So it’s her father’s responsibility to “dress her” how he sees fit.

3. A woman is an objectified sexual being and that is her fault.

Could there be a silver lining?

Thankfully, not everyone agreed or even accepted this so-called campaign. In fact, a lot of people (mostly women) were completely against it and even attacked whoever created it or supports it.

Some called this campaign out for what it really is, a cover up to the self weakness of some generalized on all to make it okay.

Stating the fact that failing to fast because you saw a woman means failing religiously, it is on you, not her.

Some even suggested a counter campaign…

As refreshing as it is to see so many people standing up for the right thing and resisting the deep rooted sexism in our society, it is still utterly disappointing to think that such degrading and derogatory minds could actually somehow succeed to normalize sexism and objectifying women on a scale even as small as a social media hashtag.

Worst of all, it is terrifying to be reminded of how scary it is for a woman to just walk down the street these days.