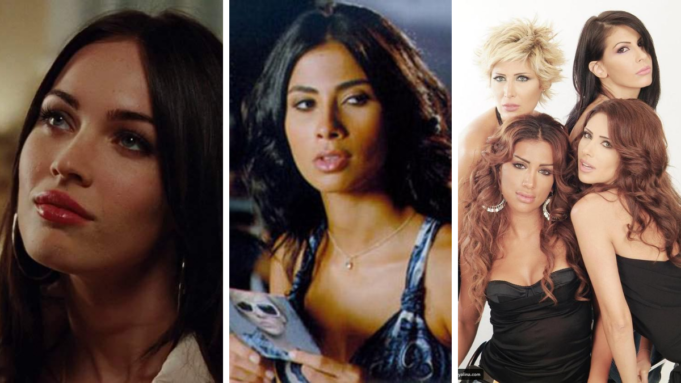 Well, it’s time everyone. We told you before to keep an eye out for the girl edition of our crush list from the 2000’s and here it is.

A lot of you might think you remember everyone the world and you collectively loved during that period, though, so be warned…you will go a little “huh? we used to like her?“

But let’s not ramble too much here. Here are the girls everyone loved in the mid-to-late 2000’s in Egypt!

Then: What were the mid/late 2000’s without Angelina Jolie, right? An established leading lady who literally redefined beauty standards, Jolie has starred in many favorites like Mr. and Mrs. Smith, Alexander, and Kung Fu Panda.

Now: As of now, the most recent anyone has seen Angelina acting was in the Maleficent films, since she’s currently more focused on writing, producing and directing. And she’d reportedly joined Marvel’s Eternals’ cast.

Then: Come on, what’s a list about 2000’s girl crushes without Ruby, AKA the one person no two Egyptians can disagree on? With classic bops, like Leih Beydari Keda and Enta 3aref Leih, we can’t really doubt her iconic status.

Now: More of an actress than a singer these days, Ruby has done a lot of acting projects from Segn El-Nesa to 7amlet Fer3on to Aho Da Elly Sar and many more. We’re still waiting for an Eb2a Abelny resurgence!

Then: Chances are you know someone who has had a Scarlett phase. If not, you were probably the one who had it yourself. Some actresses just have that “oomf” to them, you know? And that quality was strikingly clear in Scarlett’s Nanny Diaries, He’s Just Not That Into You, and Iron Man 2.

Now: So, you’ve probably heard that Natasha Romanoff won’t be coming back for more Marvel movies, but that wasn’t the last you saw Scarlett Johansson. We’re still seeing her in projects, like Jojo Rabbit and Marriage Story, and more to come!

Then: One thing – similar to the Pussycat Dolls, we don’t know any of the members’ names except for former member Nicole Saba (the Nicole Scherzingener of this equation), but that doesn’t mean we didn’t enjoy their hits, their styles, and their rarer-than-rare appearance in that one movie.

Now: The 4 Cats disbanded around 2011. The ex-members have went into fields like TV presenting (Perla Shalala), modeling (Aline Orfaline), singing (Nicole Saba, Maya Diab), or just left the business all together.

Then: She was everywhere and you know it. If you didn’t know people who gushed over her, you might be lying. You already know many people went into Transformers and Jennifer’s Body just for her.

Now: After a longtime hiatus, Megan has recently returned to acting with movies Above the Shadow and Think Like A Dog with many upcoming projects in sight. She’s also dating the PG version of Eminem, Machine Gun Kelly.

Then: Strike a conversation about the girls everyone crushed on in the 2000’s and please, please tell us if Dina’s name doesn’t pop up at least seven times.

Now: She’s still active and well, doing what she does best! And when Dina’s not dancing, she’s still continuing with her acting career.

Then: You remember how Rihanna was everywhere back in the day, right? Honestly with her viral songs and killer style, we can’t really be surprised she was the It Girl (and the people’s It Crush) back then.

Now: Much like then, Rihanna is still a state of mind and an iconic singer. The only exception is she’s now the proud owner of Fenty, the makeup/design/possibly everything empire.

Then: Though not everyone remembers the then-People’s Crush Dolly Shahine’s performances in Ouja, El-Mesh Mohandes Hassan, and Nems Bond well, we certainly remember her music..with good or bad memories, regardless.

Now: After a brief retirement stint, the Lebanese-Brazilian actress/singer has returned to her music and acting, starring in Ras El-Ghoul as recently as 2016 and releasing her Cinderella album in 2017.

So, who did we miss?