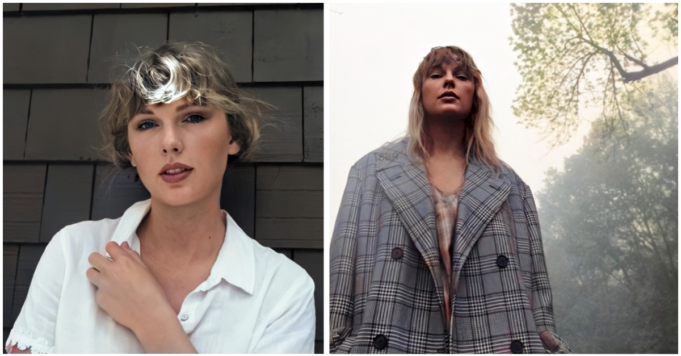 The main reason is the fact that it was a surprise album. The singer basically changed her Instagram layout to fit the new theme, announced the record in the morning, and stated that it was going to be out at midnight the same day. And so it was.

This wasn’t only an out of habit move for Swift – but also the fact that she didn’t put out any singles or music videos leading up to the release is just so unlike her.

Since she had always been the kind of artist who would put out playful easter eggs and suspenseful clues for the fans months ahead of any new album.

Moving to the record itself, we won’t be exaggerating when we say that “Folklore” is so different from anything Swift had ever put out.

We‘re aware that the same kind of statements were made in reference to her “Reputation” era. But no, at least “Reputation” sounded a bit like Taylor.

The genre and even the lyrics were not that different from her previous records. Not to mention that both the music and the lyrics corresponded with whatever was going on in the singer’s life back then.

And it’s worth noting that this is exactly what we’re used to from her.

However, as glorious as most of her previous works have been, “Folklore” is special because it’s basically a lyrical masterpiece mixed with some dreamy and calming sounds.

Taylor Swift had always been known as the breakout Country artist, but she soon moved to Pop and even experimented a bit with Rock. Needless to say, all of her records were huge successes.

Speaking of genres, “Folklore” has been listed as indie and alternative on many streaming services. And you know what? It does sound so much like indie music. Which is, again, something the singer had never done before.

Apart from the music, yes it was exceptional. But in all honesty, what stood out in this album was the storytelling as well as the lyrics.

“Folklore” played out like a movie. This is why it was important for everyone to listen in the same exact order Swift intended for it to be.

Another main reason that makes this record all the more beautiful is the fact that Swift wrote and produced the whole thing in isolation during quarantine. Talk about creativity.

She also said that the whole album is a product of her sole imagination. And that explains the way it plays out like a movie – a love story with all the ups and downs.

Swift also had a very popular record titled “Red” back in 2012. Listening to “Folklore” now is like Red, but better, more mature, and absolutely remastered.

And since this is a review, we need to list down our top favorite records from the 16-song album, so here they are:

To conclude our thoughts on “Folklore”, it’s the real-life proof that Taylor Swift is actually the greatest poet of her generation. And if anybody ever thought she couldn’t outdo her previous blockbuster records – we present you with “Folklore“; dreamy and hauntingly soothing.

Have you listened to the album yet? Let us know your thoughts and list down your favorite songs in the comments as well!