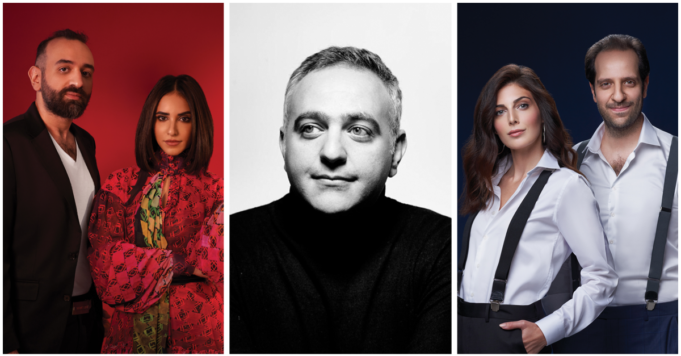 Netflix is finally bringing us the first Egyptian original on its international platform and it’s based on none other than the widely popular book series all over Egypt and the Arab world, “Paranormal”.

The mystery/thriller was written by the late author Ahmed Khaled Tawfik and we’re going to see it on screen through the eyes of its creator and director Amr Salama.

We had the pleasure of talking to him as well as director Majid Al-Ansari, producer Mohamed Hefzy and the amazing cast Ahmed Amin, Razane Jammal, and Ayah Samaha about this highly anticipated project!

1. How was the idea of bringing a huge series like “Paranormal” to life on screen initiated? What did you have in mind during the casting of the show?

Amr Salama: Back when I was only 9 years old, the very first non-school-related book that I’ve read was “Paranormal”. As I grew up I started to have the dream of becoming a director and bringing this specific project to life. I’ve always been a huge Ahmed Khaled Tawfik fan that I later began to stalk his social media accounts everywhere in order to officially meet him. He was like a godfather to me, as he is to a whole generation.

Years later, in 2006, producer Mohamed Hefzy and I finally acquired the series’ copyrights and have tried to work on it numerous times until we finally pitched it to Netflix in 2018, and now here we are!

In terms of the casting, I always stop at questions like “Why Ahmed Amin as Refaat Ismail?” and I’m always like “Well, who else?”. Simply because when I was still imagining the show and how everything was going to be like, I only pictured Amin in the role and could no longer see anyone else because, for me, he is 100% Refaat Ismail.

Same for the rest of the cast, they’re all very talented, smart, and have done nothing but make things easier for Majid and I as we worked together on the characters. To the point that every time I saw any of them on set with their character’s makeup and costumes, I would get super excited as if a child has just seen the actual character from their favorite book in real life.

2. “Paranormal” is such a different genre for both the entertainment scene in Egypt and yourself as an actor. This time around, people will be seeing you in a different light, how did you prepare for the character of Dr. Refaat Ismail and what initially drew you in to the role?

Ahmed Amin: From the very beginning of my career I’ve worked in theatre so it hasn’t always been comedy roles for me. But it’s true that my kickoff in the entertainment scene was as a comedy actor so I would understand why the audience will be seeing me in such a different light.

As for this role, director Amr Salama and I have been working closely together in order to figure out how I could accurately portray Dr. Refaat Ismail on screen.

It took both of us countless hours of rehearsals, effort, and hard work. It’s also important to note that this character has always had a very special place in my heart because I was actually a fan of the Paranormal series itself as well as the late Ahmed Khaled Tawfik on both the personal and the professional levels.

And I cannot, in any way, deny that playing such a unique role has been quite the challenge, but I honestly hope it turns out well and that people enjoy it!

3. You’re definitely aware that the mystery/thriller genre is not very common in the entertainment scene in Egypt and the Arab world, especially when it comes to series. How do you think our audience will react to this different genre?

Razane Jammal: Yes that’s definitely true. However, as actors, it’s very progressive. We usually receive the information little by little. So when we first received our scripts and the idea of the show itself, instead of focusing on the genre, we focused on our own roles and did our research accordingly.

4. Filming and wrapping up during the Coronavirus pandemic surely wasn’t easy, how did you guys handle these challenging times?

Mohamed Hefzy: There’s no doubt that it’s been very difficult, especially since “Paranormal” is already a huge project and a rather challenging and very ambitious one in itself. But thankfully, we were able to make it and push through all the rough times together as a team.

Ayah Samaha: The necessary precautions were very well taken care of so the location was very safe. Everything was very well scheduled, on point, and extremely organized. Every crew member was very aware of their roles and tasks on set. There was no pressure at all to finish shooting or get something done because there was a time set for everything and everybody was very committed.

5. What do you personally love about your characters and how was it like playing a role that’s completely different from anything you’ve ever done before in your career?

Razane Jammal: What I love about Maggie, my character, is how smart she is. She has a thirst for knowledge, she loves adventures; she’s also completely honest and not afraid to voice what she thinks.

Most importantly, while shooting, we focused on the human side of our characters and were really passionate about bringing Refaat and Maggie’s relationship to life. For me, walking in her shoes was very fun, especially that we share a lot of qualities.

Ayah Samaha: I love that the show is set in a different era. Back then, things were very different for women and for people, in general. And bringing this kind of calm and different atmosphere to life right now was a challenge.

As for my character, Howaida, despite the difficult times and the fact that she comes from a conservative family and had a complicated relationship, I like that she is a very strong woman and the love triangle in the show really portrays that.

6. You’ve already expressed your love for Dr. Refaat; did you read all the books preparing for the role? What did you find really challenging about his personality – considering that he’s very complex and multidimensional?

Ahmed Amin: I actually read the series more than once growing up. And when I was the editor in chief of a children’s magazine, I was lucky enough to befriend Ahmed Khaled Tawfik during my time there because he was working at the same place.

I got to learn a whole other side of Refaat Ismail due to the great similarities between both of them. But I would say that the one challenge and the side that was harder to portray on screen was how as a person, Dr. Refaat Ismail never showed what goes really on inside his mind.

7. How was the experience of working with Amr Salama like on such a very significant project?

Razane Jammal: Amr is a visionary; he’s very talented and it’s been a pleasure working with him. He’s also not the kind of director who imposes his view; it’s a collaborative work for him. So he trusted us and gave us a voice. And it was honestly the same with Majid, despite how different their work styles are.

Ayah Samaha: As an actress, I’ve always wanted to work with Amr Salama. And as soon as I landed the opportunity, I clinged to it and it was a dream. Everything I had already heard about him turned out to be true and he really is that director who would give a lot of space for creativity to his actors. I was truly comfortable and at ease while working with both him and Majid. It’s been an honor.

8. We’ve been hearing so much about how the visual effects and graphics in this series’ post-production are going to be out of this world and we’re so excited! Can you talk to us about the execution?

Amr Salama: All I can say is that we’re very proud of the outcome and we’re very grateful that Netflix helped us in the execution and post-production process with their expertise. Not to mention that all of what you’re going to see on screen has been proudly done in Egypt, which is very new and of course was under Netflix’s supervision.

Majid Al-Ansari: It was quite the challenge but we’re very proud. It’s slowly getting there and we’re thankful for the team behind the execution and even though we can’t really talk much about this part right now, I’m pretty sure that people will enjoy it!

9. Did you expect the huge reactions post the announcement of the series? What are you hoping that the fans take out of “Paranormal” once it’s released?

Amr Salama: Well, I’ve been getting threats on my social media for quite a while now from the fans of the series as soon as they heard about the adaptation. So I’m honestly terrified but really excited and definitely hoping they love it!

Mohamed Hefzy: Even though Amr mentally prepared me for the hype that was going to follow the announcement due to the popularity of the book series, I still didn’t expect the amazing reaction and it only gave me the push I needed to work harder and really give the fans and the audience what they deserve!

Ahmed Amin: Above everything, I’m personally hoping that it satisfies the fans and readers of this book series and I would love to see it surpass the success of the books – considering that Netflix is an international platform and the chances of “Paranormal” making it all over the world are not at all unrealistic so we’re very excited!

Razane Jammal: I can promise you that the fans will fall in love with Refaat. And for me, I’m very excited and looking forward to the release because I believe that Netflix brings people and different cultures together and it’s great for the Egyptian audience to be represented on such a global platform.

Hopefully, we can continue to produce more works from the Arab world and share our stories and love for cinema with the world.