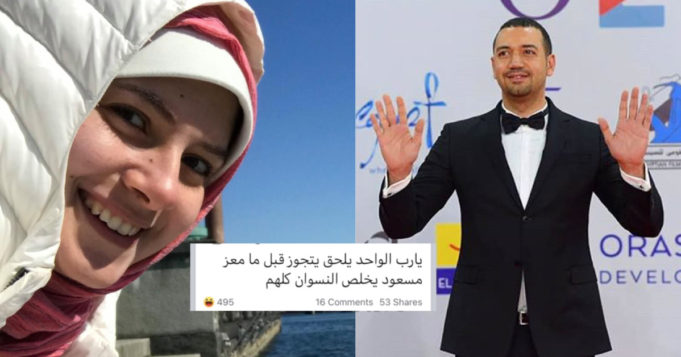 For days now, Moez Massoud has been dominating the top trends. Why? Over RUMORS about a new marriage to actress Hala Shiha. Honestly, at the beginning, we thought that social media is just over-egging things.

But after Massoud’s ex-wife, YouTuber Passant Nour Eldin, made a comment about it, we honestly felt that this just made the matter far more pressing!

In her first public comment since her divorce from the religious scholar, Passant went on to describe what it feels like having her personal life choices as meme material and an open space for public judgment.

She contemplates how sad and anxious she feels about how people will overlook your entire career, personality and humanity, and continue to judge you by one simple choice you once made.

For those of you who didn’t catch the trend, this is the type of posts that has been circulating Facebook and Twitter for days. Bullying not only Massoud for his love-life choices, but also every single lady he ever shared a relationship with. The price of fame?

We always considered the lives of those in the spotlight to be some sort of an acquired right. We get to gossip about their divorce, judge their daughter’s choice of clothes, and make fun of their partner’s looks.

Without even thinking about what these people must feel like. Logging into their social media accounts every day only to find that the public decided to make them the talk of the town for days, HOW SAD IS THAT?

This is the reason why people (specifically celebrities) suffer from depression, social anxiety, and generally all types of mental illnesses.

They are humans who have to live with a double consciousness; struggling through life and dealing with the fact that everyone else knows about it.

This is not the first time a woman in Massoud’s life gets harassed in cyberspace. Actress Sherry Adel and his first wife also had their fair share of the very unfortunate meme-cake.

Will Hala Shiha be the next one? We honestly hope not.

Finally, our full support goes out to Passant and all the women – celebrities or not – who are being shamed for their previous choices in life.

Let’s pull the curtain on this toxic online behavior once and for all!