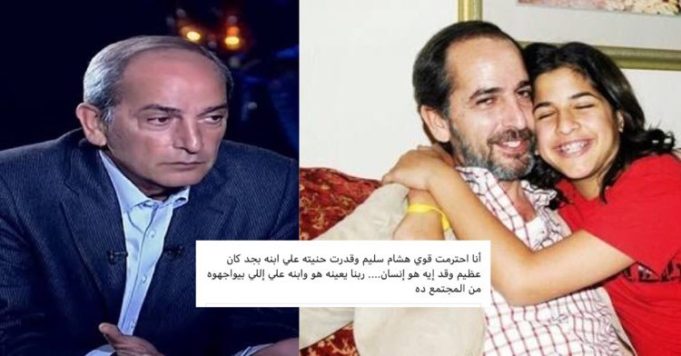 If you’ve been online yesterday, May 3rd, you probably noticed how everyone was talking about pretty much nothing but Hesham Selim. Yes, the veteran actor topped the trends on Facebook and Twitter, and here’s why!

Hesham Selim, veteran actor and son of the late football player and 10th President to El Ahly Sporting Club Saleh Selim, was interviewed by Inas El Deghedy for her new Ramadan show on El Qahera Wel Nas channel, and he had some very interesting yet shocking revelations for us all…

When El Deghedy asked Selim about the sexual identity of his daughter he said: “My daughter Noura is now my son Nour, a transgender.”

At that moment, we are pretty sure jaws were dropping hard at every single Egyptian home attending the show. And frankly, we are not sure that reactions to the bold and glaring statements of the actor would be cast in a positive light.

But to our on-going surprise, and to prove us wrong, most reactions on social media commenting on the incident came as supportive and understanding as one could ever imagine!

Honestly, we believe our initial worries were surely legitimate. Given the fact that usually when it came to topics that had anything to do with sexuality or the LGBTQ community, our society’s capacity for understanding and accepting wasn’t our strongest suit.

But now, and thanks to the proud father Hesham Selim, we can finally see a glimpse of hope for a better future where our Egyptian society could evolve into one respecting those who suffer in silence…

Hesham Selim concluded this segment by saying: “I can’t force the society to accept my son or what he stands for. But I can ask it to show some empathy towards his likes.”

So, we would like to double him on that plea. We can’t ask of anyone to simply change their ideas or beliefs, but we can for sure ask them to try.

Try and see the undeniable changes bestowed upon our world and decide where exactly one wants to stand from those changes.