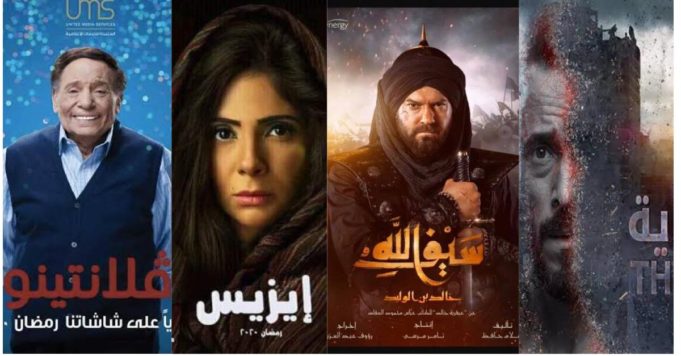 Ramadan may still be 4 months away, but TV show lists have already been announced and we can hardly hold our breaths. Here’s what we know so far.

Valentino is a TV drama that was supposed to air last Ramadan but got delayed. Adel Imam is returning to the silver screen with a new comedy starring Dalal Abdel Aziz, Dalia El Behery and Hamdy El Merghany.

Another show that we were expecting last year but is set to come out in 2020 is El Nasabeen. With a duo of Asser Yassin and Nelly Karim, we are expecting a lot. Especially since Kamla Abo Zekry is the director!

Mohamed Ramadan is currently shooting a new series in a second collaboration with director Mohamed Sami. We don’t know much about the plot, but it would be nice to have a different storyline for a change.

Youssef El Sherif is ready for Ramadan with his version of the apocalypse in “El Nehaya”. The TV show discusses the end of the world, artificial intelligence and clones!

Amir Karara is still hung up on the law enforcement roles, but this time he’s an army marshal. The series is actually controversial since the family of the late marshal in real life are filing up a suit against the production!

One show that we’re super excited about is “Seif Allah” by Amr Youssef. The historical series is an adaptation of El Akkad’s famous book about Khaled Ibn El Waleed!

Mona Zaki has been working on this project for a couple of years now and it’s finally coming out to the light. We don’t know much about “Isis”, but all the shadiness made us feel certain that we’re in for a drama ride. The poster is just imaginary, by the way!

Veteran actress Ghada Abdel Razik is joining the Ramadan marathon with a different light. She’ll be playing the role of an Upper Egyptian woman in power!

Nothing official yet but rumor has it, Ahmed Mekky is returning with “El Kebeer” season 6 this Ramadan. Bad news though, Donia Samir Ghanem will be replaced by Asmaa Abu El Yazid as his wife “Hedya!”

After their huge success in “El Wassya” and “Rayaah El Madam”, the hilarious duo Ahmed Fahmy and Akram Hosny are coming back with a new comedy called Timon W Bomba!

You probably already heard about this one since news about it flooded social media in the past couple of days. Veteran actresses Nadia El Gendy and Nabila Ebeid are teaming up for a series!

After the huge success of season 1, Karim Abdel Aziz and Sherif Mounir are returning for a sequel to the action drama in 2020.

Rumor has it, Ahmed Ezz and Hend Sabry will be joining forces in Ramadan 2020 for a huge production. The series is about espionage and is excepted to be a huge success but everyone is still so discrete about it; we can’t wait!