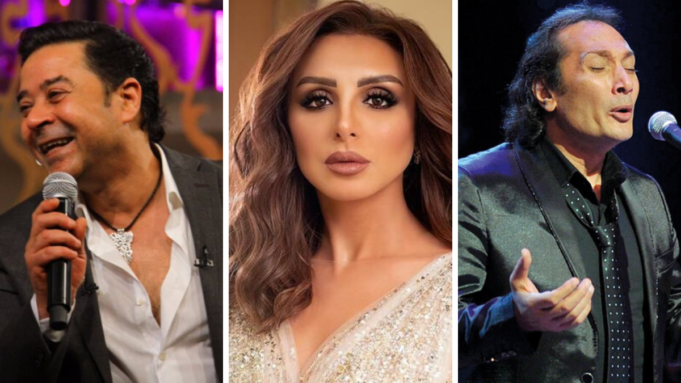 If someone started to sing the theme song to any Egyptian show from the 2010’s, would you notice it and sing along? Think about this question really hard before you answer it. Are any of today’s theme songs iconic enough?

Okay, so that’s a bit rhetorical because we know today’s theme songs, even if good, still have a long way to go till they reach “great”. And, yes, honestly this has a lot to do with the singers behind these theme songs.

But know what? Even though we have a lot of iconic theme-song-specialist singers out there, we really can’t help but wonder just who’s the best out of the best of this bunch?

Yes, we’re ranking them. Get Ready!

Known for the theme-songs of El-Watad and (overwhelmingly) Arabesque, Hassan Fouad’s voice is recognizable anywhere and everywhere. To be honest, the only reason we’re putting him at 6 is that we’ve largely only heard it through those two songs and one oprette!

Can you imagine what some shows’ theme songs would have been like if he didn’t temporarily retire from music, though?

Another incredibly recognizable voice, Hanan Mady started out by singing the theme song to 1990’s El-Leqa2 El-Tany and managed to steal the nation’s attention away with a song that was also a duet with Aly El-Haggar!

And it didn’t just stop there. Mady also went on to give us theme songs to shows like Qeset El-Ams, El-Wesha7 El-Abyad, and the gigantic, unforgettable hit that was the El-Mal Wel-Banoon theme song. And that last one alone earns her a place on this list!

A legendary performer with a legendary voice, Angham never really gives you time to ponder whether or not she’s iconic. She simply is.

And anyone who says differently clearly hasn’t heard Hadeeth El-Sabah Wel Masa’a’s theme song, which the singer has made insta-recognizable from the first few notes!

But Angham didn’t only give us that. She’s the voice behind the theme songs for El-3a2eela and Ser El-Ard. She’s is also still doing themes for newer shows, the most recent of which are 2020’s Gam3 Salem. The only reason she’s not higher here is because you already know who is.

If you feel an instant connection to Alexandria even though you’re not Alexandrian, Mohamed El-Helw (the voice behind the Zizenya theme songs) is probably the one responsible for it.

That theme song alone is honestly iconic enough that Mohamed El-Helw can comfortably sit at this ranking but the man has lent his voice to even more iconic tunes. Among his other theme songs, you will find Ayam El-Mounira, Adib, and Layaly El-7elmeya…AKA the most memorable theme song in Egypt ever.

Come on? How can a list about iconic singers who specialize in theme songs happen without us mentioning Medhat Saleh in it?

Honestly, we don’t even need to get into it. The man has built a career on being a part of our pop cultural conscience through giving us many an iconic theme song!

You’re not surprised, are you? If Aly El-Haggar, who could also be known as one of Egypt’s top ten most recognized voices, isn’t number one on this list, who would it be?

At this point, we all know that the theme songs he’s given us are basically embedded in public consciousness but let’s take a refresher here.

If it wasn’t for them, we can assure you entertainment would have been different!