Identity Magazine
Home Trending “L’mallem” is an Accused Rapist, and No One Seems to Care
Facebook
Twitter
Google+

Moroccan singer Saad Lamjarred has been detained in France after Frenchwoman Laura Prioul accused him of rape. Prosecutors successfully appealed against his bail terms, and the singer has been charged with rape.

If that doesn’t scare you enough, Lamjarred has been accused of another rape incident in 2016, and another physical assault and rape charge in 2010.

Lamjarred rose to fame in 2015, when his song Lmallem went viral and became the most viewed Arabic music video on YouTube with 668 million views. That was after his first sexual assault; where he was arrested in suspicions of beating and raping a woman in New York in 2010, and later fled the US to avoid charges.

Since then, Lamjarred has been gaining views within the million digits, gets booked in every major music festival, played all over radio stations, and became a top Arabic singer. Not one person held him accountable for his actions.

Even after his second arrest in 2016, where he was also accused of rape, the public supported him. It went as far as the Morrocan king himself handling his legal fees to free him. And when he released a song right after his release, it went to become a major success.

The singer was an accused rapist, yet YouTube decided to promote his videos, radio stations play his songs. The media celebrated the rapist.

If you think that after his THIRD rape charge, the public decided to disown Lamjarred, and hold him accountable for his actions? You are wrong!

Not everyone, however, is supporting the accused rapist. A women’s rights campaign in Morrocco named #masaktach have been actively pushing radio stations to stop playing Lamjarred’s songs, and thankfully, have been receiving positive reactions. 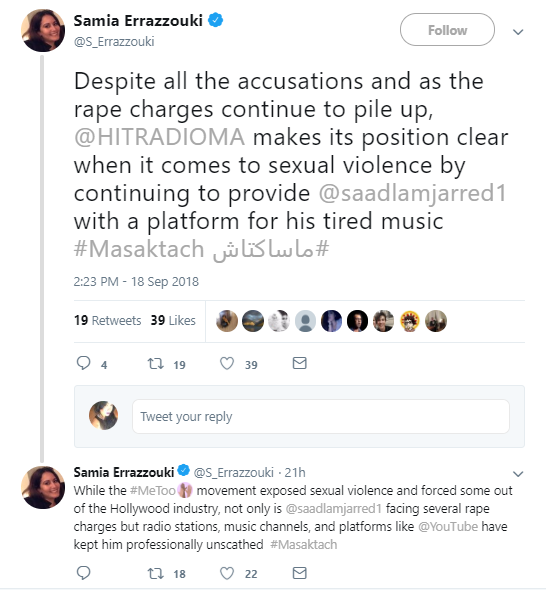 Great news and a positive step if true! Reports that @HITRADIOMA will no longer be playing @saadlamjarred1’s songs after @masaktach campaign hits social media hours before Lamjarred is taken into custody for rape charges. https://t.co/zpMiOczcJW

While we’re glad he’s currently in jail and paying for his crimes, Lamjarred will soon be free again. He will continue to be a successful musician, and will most probably continue to assault women.

So far, he has not been dropped by his label. Nor did any big name in the music industry speak against him.

Update: Lamjarred has been released from jail, on Wednesday 5th of December, 2019.

Last night, Lamjarred took to his Instagram to thank his fans, media artists and friends for supporting him. He also announced the release of his new video set to be dropped a week from now.

This is the second time the same exact scenario happens with Lamjarred. Unsurprisingly, he’s been getting support from the majority of people. This incident will remain forgotten like the previous ones.