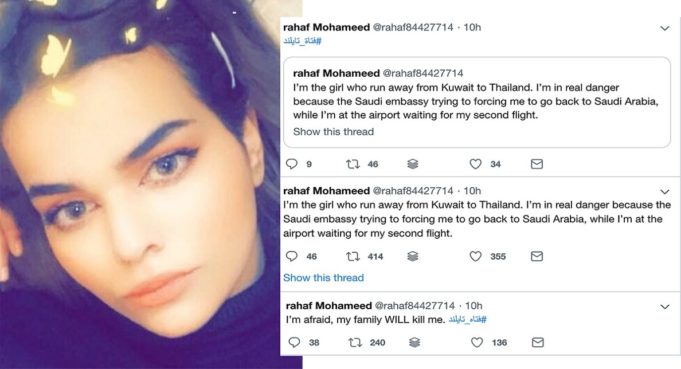 Rahaf Mohammed al-Qunun, a 20-year-old Saudi woman, is currently being held in an airport hotel in Bangkok. She was on her way to seeking Asylum in Australia.

Rahaf took to Twitter to state that her family will kill her if she is forced back to Saudi Arabia.

I’m the girl who run away from Kuwait to Thailand. I’m in real danger because the Saudi embassy trying to forcing me to go back to Saudi Arabia, while I’m at the airport waiting for my second flight.

Rahaf explained in a series of tweets that she fled Kuwait, where she was holidaying with her family, for Australia, where she will attempt to claim asylum after renouncing Islam.

I’m afraid, my family WILL kill me. #فتاه_تايلند

Rahaf told AFP she was stopped by Saudi and Kuwaiti officials when she arrived in Suvarnabhumi airport and her travel document was forcibly taken from her. Her claims were later confirmed by Human Rights Watch.

Thai police told BBC that Rahaf was escaping a forced marriage. Her entry to Thailand, however, was denied because she did not have a visa to Thailand.

went out of the room to figure out if they’re watching me closely or not
I’m under there sight all times “been asked to get back to the room”
She was checking when I’m going to be send back to Kuwait before 11h of the flight time they must want it to end as soon as possible pic.twitter.com/mwBbKQ9QN7

Thai police stated that they are in the process of repatriating her through the same airline she had taken, Kuwait Airlines.

They are unaware of her passport being seized. They also did not explain why she might need a visa for Thailand while being there only for transit.

This is not the first time we hear a similar story:

If this story seems too familiar, it is because it shares many similarities to the story of Dina Ali Lasloom. Dina was a 24-year-old who in 2017 was also attempting to flee Saudi Arabia and was forced back with her family who took her from Manila Airport.

Till now it has not been confirmed what happened to Dina since her return to Saudi.

The last update received about Rahaf is from a live video that is broadcasting as this article is being published, where she is shown locking herself in the hotel room.

As of the 7th of January, the head of Thailand’s immigration police stated that Rahaf has has left the Bangkok airport “under the care” of the UN refugee agency. 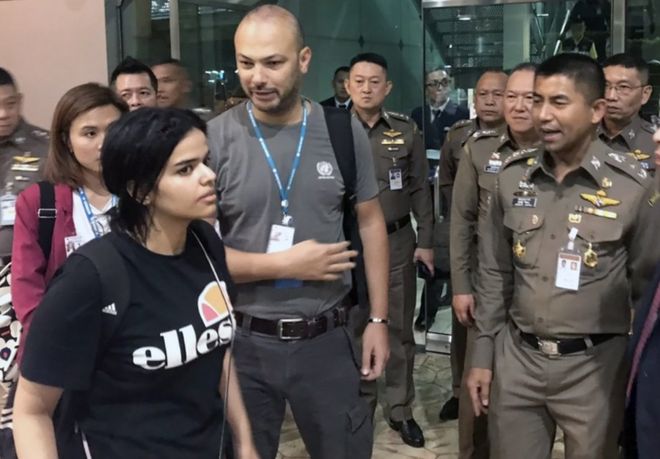 Thailand’s chief of immigration police Surachate Hakparn confirmed that Rahaf “is allowed to stay” He also stated that Thai police will “take care of her as best we can”, adding: “She is now under the sovereignty of Thailand; no-one and no embassy can force her to go anywhere.

Breaking: The Thai authorities have granted UNHCR, @Refugees access to Rahaf Mohammed Alqunun at Bangkok airport to assess her need for international refugee protection and find an immediate solution for her situation.

*This is an ongoing event, and we will be updating the article as soon as we receive more information.