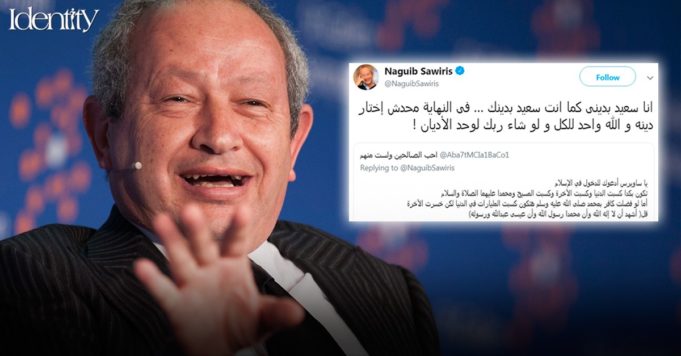 Yesterday a twitter account under the name of «أحب الصالحين ولست منهم» tweeted at the prominent businessman Naguib Sawiris, asking him to convert to Islam. As if that wasn’t blunt enough, the account user proceeded by urging Mr. Sawiris to take the conversion step so he can, and we quote; “win in both this life and the Hereafter.”

Yes, take a minute for that to sink in. 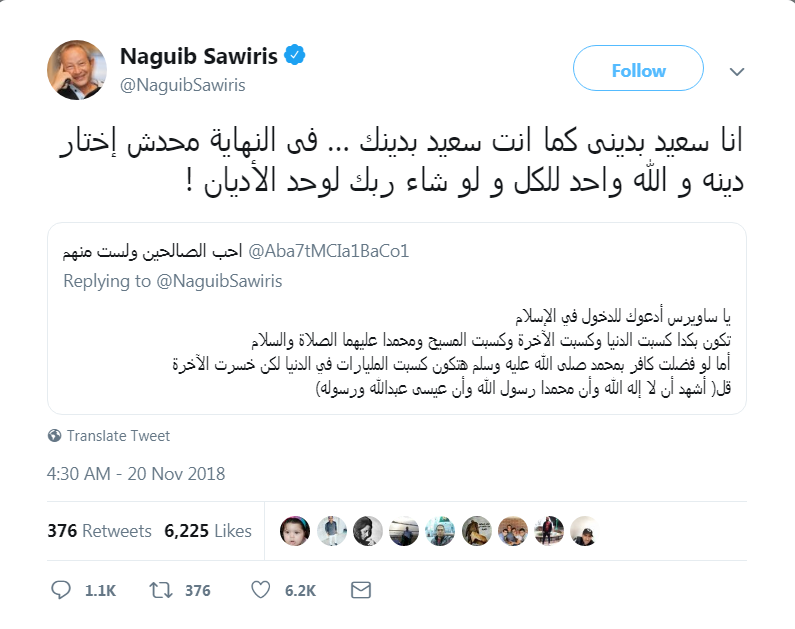 Thankfully, Mr. Sawiris managed to handle the situation gracefully with his reply saying, “I am as happy with my religion as you are with yours. No one chose to be born of a certain religion. ِAnd if God had wanted, He would have united all religions.”

Although the reply was as clear as day, some people just did not want to get the hint. Following this tweet, other accounts continued to tweet at Mr. Sawiris arguing with him over his OWN decision regarding his OWN religion. 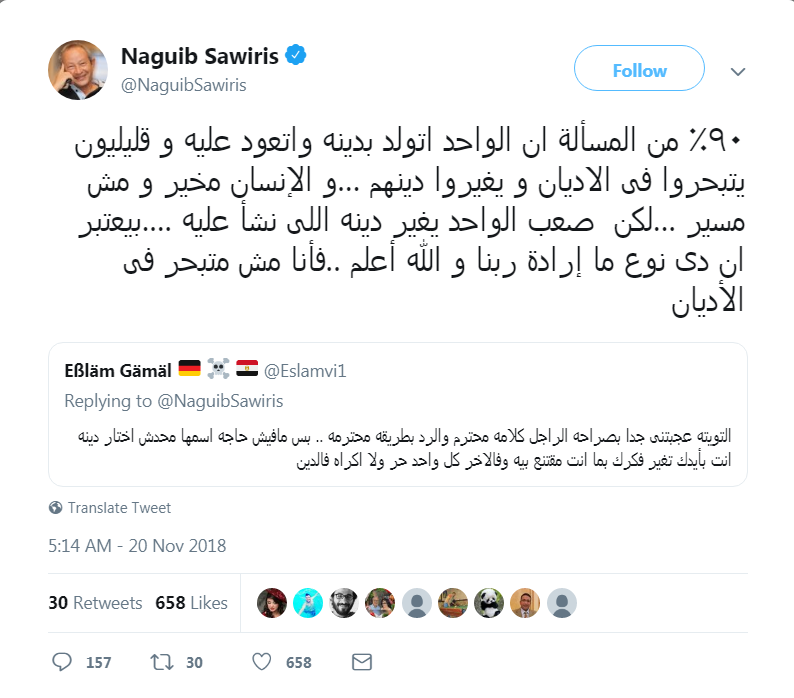 “You still have the chance to change your mind.” Another user actually said that in reply to Mr. Sawiris after he clearly stated that he is NOT INTERESTED in changing anything.

Astonishingly enough, Naguib Sawiris still managed to diplomatically and calmly reply to the tweet. The more astonishing part is that this infuriating twitter thread put Mr. Sawiris in the situation where he had to actually justify his sticking to HIS religion. 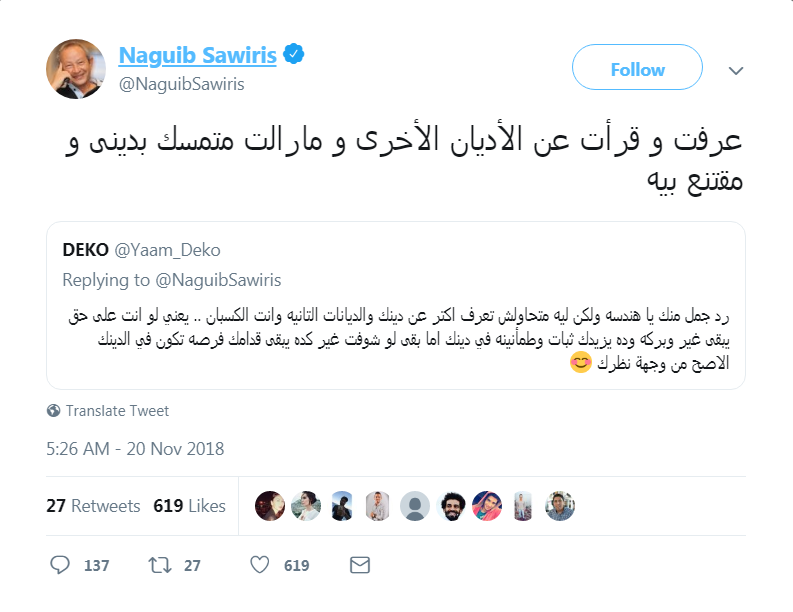 Okay, people, you seriously need to chill. The man obviously and plainly stated that his mind is made up and that he does NOT want to ‘look around’ for a different religion.

Lastly, to put this pointless conversation to rest, Sawiris straightforward stated his final and last say about the topic; saying “To clear any confusions; I am a Christian, I believe in my religion and in Christ’s sacrifice and that there’s only one God.” 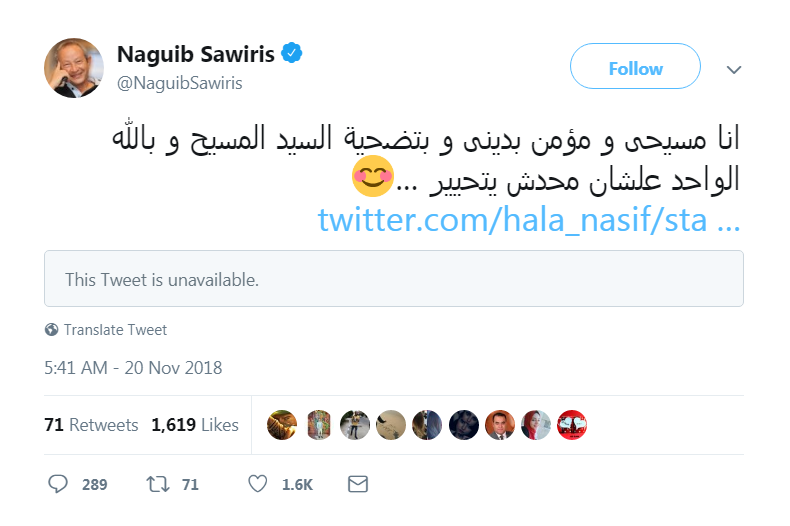 Still as humble and graceful as ever! 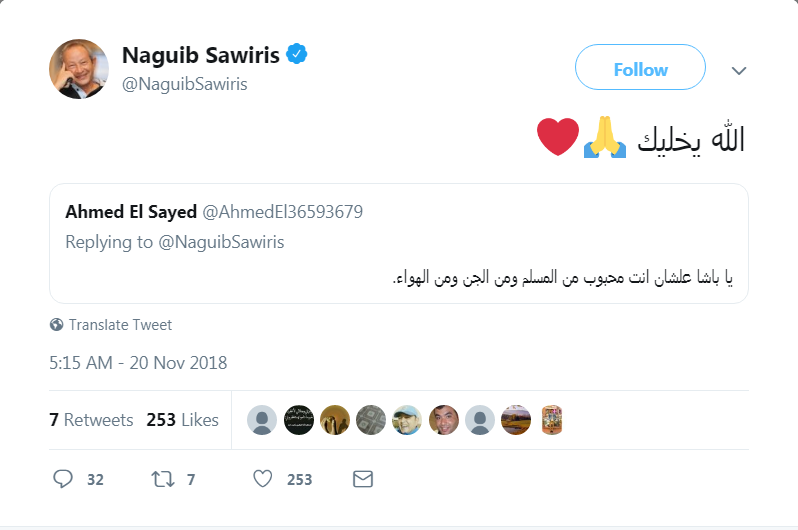 Finally, someone tried to smooth things over by joking and explaining to Mr. Sawiris that people’s pushiness stems from their love for him.

However, in the end, we must call things for what they are. This is overstepping in its purest form. We all encourage freedom of speech and agree that social media platforms are an open space for us to express our minds freely. But that does not give us the right to step over personal boundaries, invade people’s personal spaces and judge people’s personal opinions and approaches to living their lives.

Religion is a personal and very sensitive matter. Most importantly, people’s choice of religion is not a topic for discussion. It is to be accepted and respected. That’s it.