As summer comes to an end, many are looking forward to the cozy winter atmosphere. For parents, on the other hand, this season is nothing but an absolute nightmare.

We all hear the crazy stories about the long schools’ admission process in Egypt, but now it’s turning into a frenzy, we had to comment!

We are not saying that the trending admission procedures now expanding to include both parents is bad altogether. But, it seems like things are getting slightly out of hand, especially with privately owned schools, that some strict regulations are in order!

Here’s how people reacted to the matter:

And here’s a recent video from El Hekaya TV show that featured some of the raging parents!

This has gone so far, to the point where a number of online platforms are now offering lists of the common questions that you will most likely be asked in such interviews!

Here are some of the questions parents agreed are recurrent when applying to different schools all over Egypt..

Children and parents are being subject to a nerve-wrecking interview with irrelevant and inappropriate questions:

Such intimate and highly private questions do not, by any means, qualify as criteria for judging whether or not a child should be accepted at a certain school. What’s even the point?

Kids with mild disorders or learning difficulties (which is pretty normal for their age) are being rejected on the spot!

As far as we know, the ministry of education has been doing some serious changes in the rules and regulations regarding children with special needs and adopting an overall inclusion plan. It is about time we see them being carried out on the ground!

As if our private educational system in Egypt is not expensive enough on its own, school owners just can’t seem to miss the chance of making some good extra money out of this whole trend. Talk about private agenda!

Don’t get this wrong! no one is against child-parents assessment in general. On the contrary, we think it’s a great idea and a step forward in our educational and social systems. However, are we-in Egypt- missing the whole point?

Here’s why we think the trend is backfiring…

According to children psychiatry, a school interview is crucial for the school’s overall insight into the kid’s psyche and learning abilities. Hence, the main aim behind this assessment is to detect the main familial stresses and personality traits that might emerge as a problem and might slow down the learning process.

With that being said, the procedures carried out by schools now have absolutely nothing to do with the mental and psychological welfare of their possible students. Their interview criteria does not rise up to the standard qualifications for an efficient assessment, let alone, denying a young boy or a girl from their right in a proper education on such basis!!

Reflecting on the matter, we remembered a similar incident that went viral two years ago, and surprisingly, it is still relevant today! 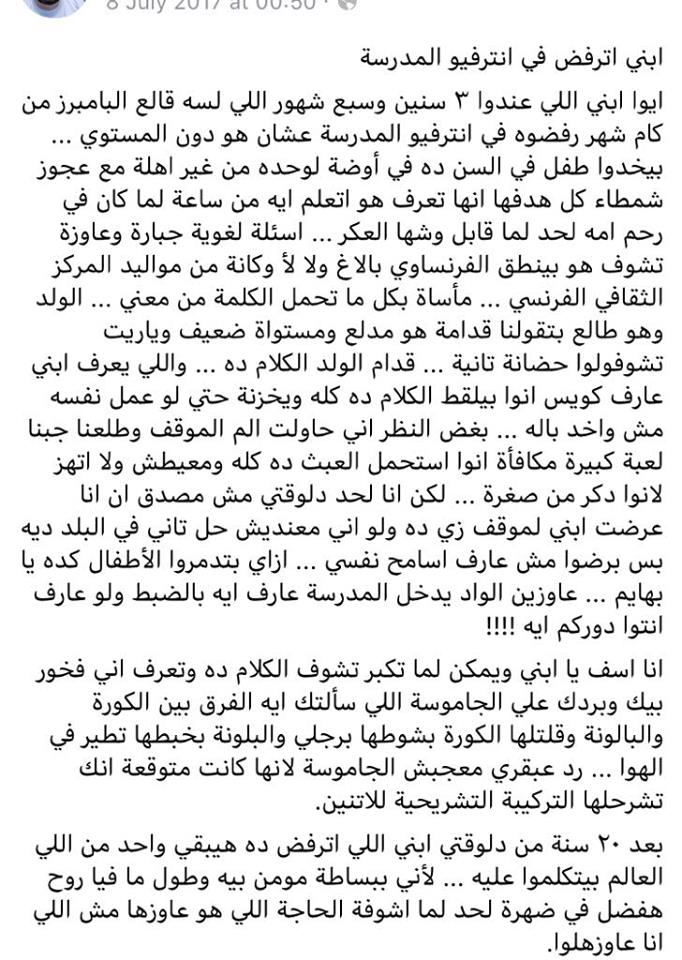 It appears that the trend has drifted so far from the right path that it has become an act of stigmatizing children, single mothers and middle class parents for wanting a better education for their children; the natural process of upgrade that ought to be encouraged rather than denied!

The way we see it, this whole thing has become nothing but a revenue stream for privately owned schools to make more money. But, at what cost?