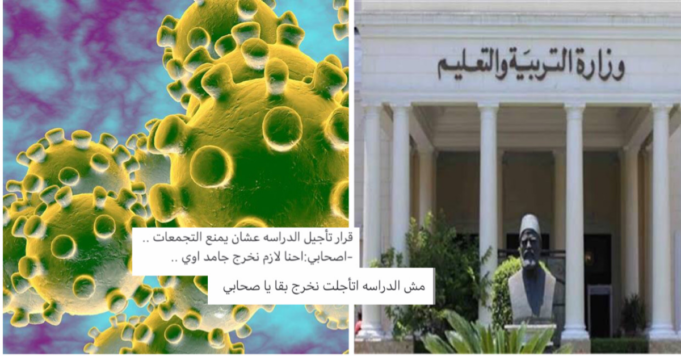 While the world seems to be on the verge of a global lockdown due to concerns over the novel Coronavirus, many people aren’t yet aware of the magnitude of the reality we find ourselves in today.

That decision, of course, came in support of the international efforts to curb and contain the virus.

However, while the hilarious memes that followed the schools’ shutdown news are really funny – there’s no denying that; but they still sparked major concerns about how a lot of students are actually considering it a vacation. Rather than a period of social distancing and self-isolation.

Yes, if you scroll down your different social media timelines, you’ll surely find a number of wise Egyptians advocating against considering the coming two weeks a vacation to roam the streets of Egypt and hang out with friends. Many are also making it their mission to spread awareness on the topic. Which is definitely very helpful at times like these.

That being said, as previously pointed out, the amount of school and university students who are taking all of this as a joke – thinking their chances of encountering the infectious virus aren’t high, is in fact, concerning.

Therefore; we had to take the time to advise you that any misconceptions leading you to believe either that you won’t get infected or that the infection won’t be dangerous nor fatal, should be thrown out the window, now.

Because, unfortunately, this is a global crisis we’re all facing. So, in other words, we’re all in this together.

And if one person is neglecting their own health and/or hygiene; then that could only indicate that they’re also not concerned about their loved ones.

Since, in case you don’t already know, the virus is highly contagious. And its real danger doesn’t only lie in the bacteria it carries, but in how quickly it could spread around as well, infecting thousands daily.

Take Italy as an example, where the virus spread only a few weeks ago – starting out with 60 or 70 cases, at most. But in just a few days, the number of infected cases and fatalities continued to rise and jump to surreal levels in the span of a few hours; now, the whole country is on lockdown.

And what’s even more alarming – but should also be taken as a warning, is how Italians themselves are taking responsibility for the crisis that hit their country because they underestimated how dangerous and deadly the virus could be.

So instead of self-isolating at home, they went on with their social events and daily hangouts like nothing is happening – until things went south.

So at this point, we’re actually begging everyone to stay at home – just for a little while, at least in support of what the state is trying to do in order to contain the virus and avoid a possible disaster.

Social events, going to the movies, shopping at the malls, using public bathrooms, hanging out at cafes with smoke all around and being stuck in long lines for God knows what or how long is really not worth it, at all.

Because all those factors could easily contribute to spreading the disease, in more ways than you would ever think.

Please take care of yourselves and others. This is not a joke, but it’s also containable if we follow the rules and take the right measures.

Oh, and please, do not underestimate the power of washing your hands for 20 seconds every hour with products that contain 70% alcohol. Stay safe.