Identity Magazine
Home Trending Seems that El-Esseily is Keen on Creating Drama and Offending his Own...
Facebook
Twitter
Google+ 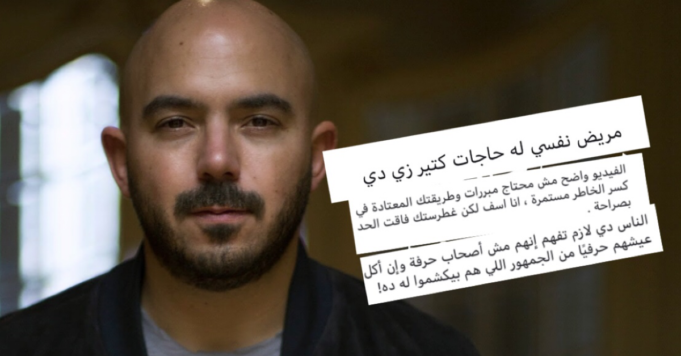 It honestly feels that we’ve already written about this a million times before, but once again, Egyptian singer Mahmoud El-Esseily offends his audience!

This time, he’s not tweeting angry statements at fellow artists or giving any unnecessary opinions on controversial topics. Instead, he decided to take the drama to one of his own concerts.

According to the video going viral at the moment, one of El-Esseily’s fans wanted to take a picture with the singer at one of his most recent concerts. And from the looks of it, the person who wanted the picture seemed desperate.

Keeping in mind that he was so close to the stage, which is why he found it easy to try and ask El-Esseily for it. Since it would be no big deal if he snapped a selfie from where he’s standing.

However, did El-Esseily let this go? Well, absolutely not! He stopped singing and basically shouted at the man and embarrassed him in front of God knows how many people!

His exact words were: “Do you have a strong connection or something? Are you someone important or anything? Okay, you love me and everybody here hates me, for example? If I take a picture with you, don’t I have to do the same with everyone in the room? Am I wrong?”.

Then, he moved back to the center of the stage and resumed his performance.

Needless to say, that statement sparked controversy all over the internet. And even though the singer addressed the criticism and ‘explained’ his situation, saying that he didn’t mean what he said, people were still not having it. And they have every right! 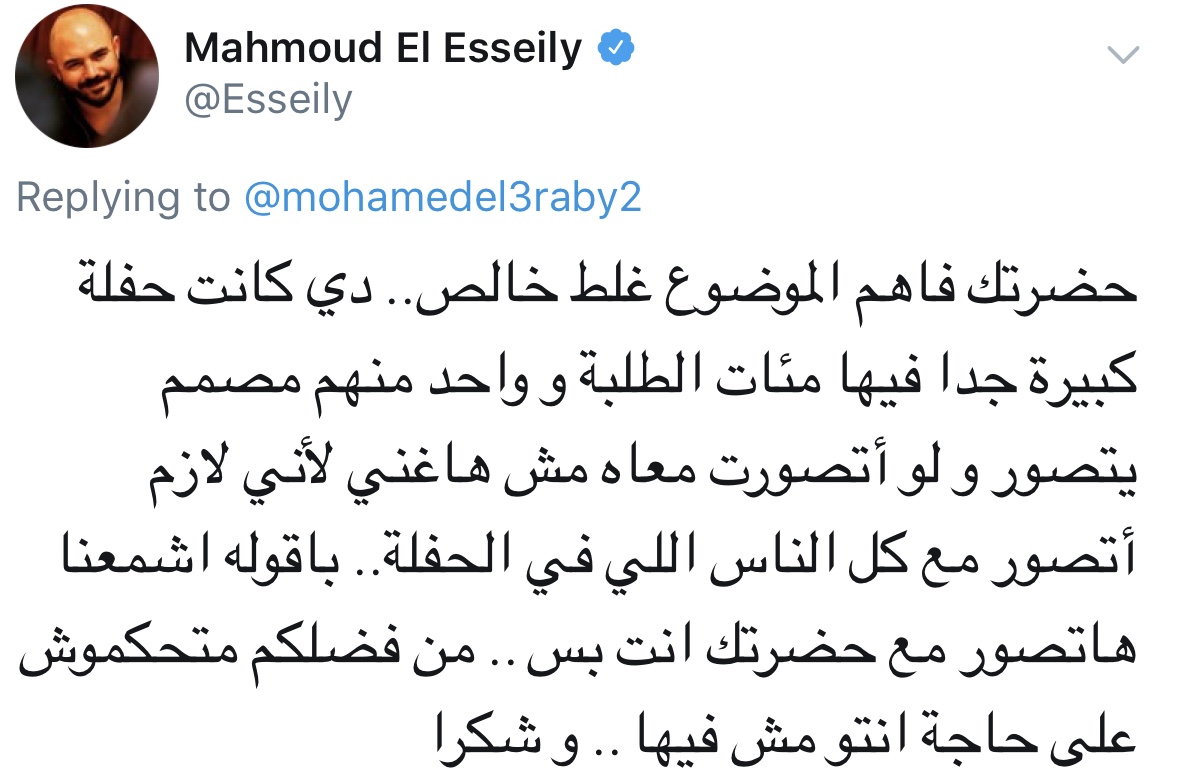 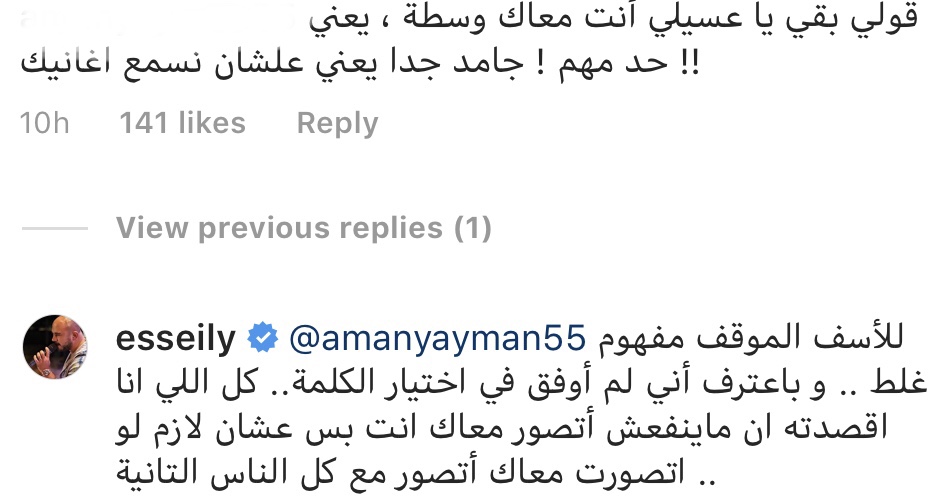 Some people even went back to his recent tweets about ‘being a good person‘ and ‘seeing the flaws within yourself‘ and made fun of how those words are supposed to be directed at HIM, not others. 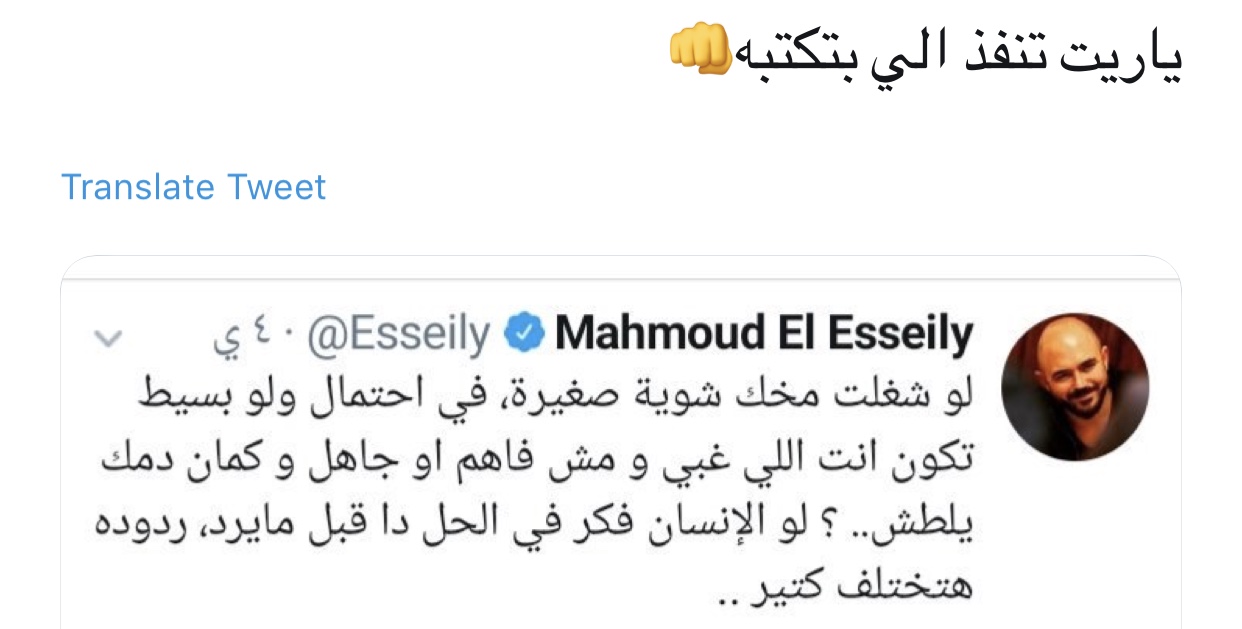 Well, where do we begin?

We just don’t understand when did being a famous person or even a superstar suddenly become a green card to offend anyone and do whatever one pleases and still remain untouched?

Like why are people always in the position to get bashed by their favorite artists and are supposed to ‘take it lightly‘ just because whoever he is ‘wasn’t in the mood‘?

Sorry to break it to everyone but if it wasn’t already clear enough; people who work in the media – specifically – and those who put their works out there and call it art, in whatever form it is, are nothing without their fans.

And this statement isn’t supposed to offend anyone because it’s simply based on facts. Let’s put it this way: No matter how incredibly talented you are and even if you’re ‘self-made‘, you still wouldn’t get anywhere and your name would never shine if it wasn’t for your fanbase. And the people who usually pay a fortune to consume your albums/works and see you perform!

El-Esseily said something that really showed how many artists nowadays are creating incredible barriers between themselves and their fans. Or, scratch that. Not just fans, but even ‘regular‘ people.

When he said “Do you have a strong connection or something? Are you someone important?“, the way he belittled that person is inexplicable. Because surprise surprise, if you don’t have a strong connection and if you don’t have someone important in the family to make arrangements, sorry but you can’t take a picture with El-Esseily!

We just want to know, who created this logic?! You’re supposed to be someone who’s loved by so many people in a country that has a 100 million others. Why is it SO hard to appreciate that and reciprocate the love? Why is it so hard to be nice?

After almost 24 hours of the ongoing drama; thankfully, El-Esseily decided to post a full apology statement on his social media platforms. 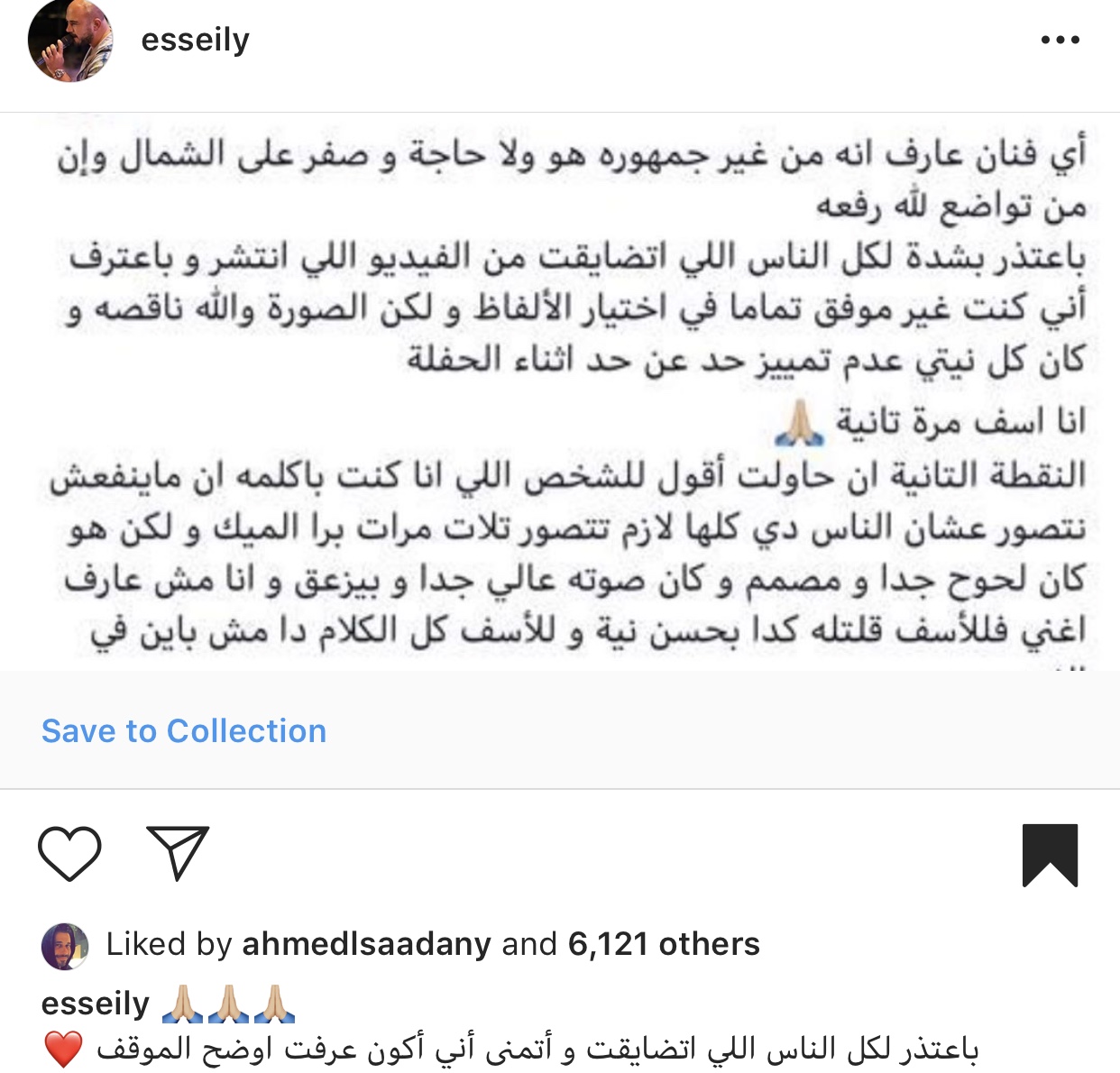 Anyway, like we said, this is like the umpteenth time El-Esseily does something like that. Therefore we don’t know if he’ll ever stop and control his actions before he really loses the undeserving love he receives. What do you guys think?