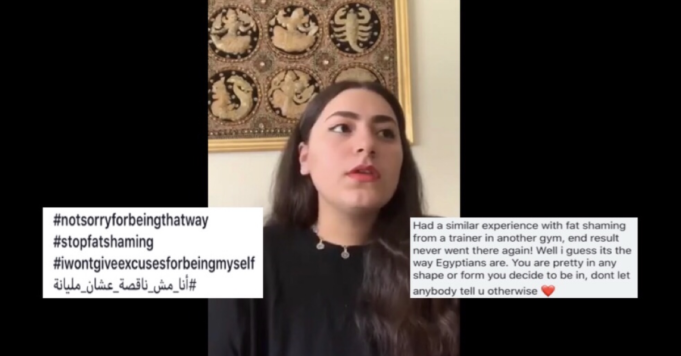 Fat shaming is such an unfortunate trend in many societies. And just as we think that speaking out about the bad in our world is making it eventually go away, well, it’s probably not.

However, when people fat shame others in schools, universities, public places or even on the street; it’s not that odd. Because we do know that bullying exists, and this is a part of it.

But when such a thing occurs in A GYM, there really must be something terribly wrong!

A couple of weeks ago, a young Egyptian woman named Yasmine El-Garhy, published a video on her Facebook Page, telling a really horrible story.

Other than the fact that from El-Garhy’s words, the gym seemed super unprofessional in the way they dealt with her passing out, in addition to the whole “You won’t get a refund after posting that video” thing, what we really cannot process here, are the nutritionist’s words.

How can someone be so heartless? How is it okay to tell not just a client, but a human being that she’s OBESE, and has surpassed all levels of being fat? What the actual hell?

Let alone the fact that the nutritionist’s words began by: “Of course, you sought the help of multiple others before me and you came here to be pretty, right?”. Again, what the hell, people?

Those words are not just hurtful, hateful and super disrespectful. They are also a whole new level of body-shaming and bullying. In addition to false misconceptions about beauty.

“No, I know that I’m beautiful the way I am. I just came here to be healthy, that’s all,”

Those were the words of El-Garhy to the woman who thought her words would help and motivate her client, to lose weight!

And those were the hashtags she included with her post.

Because we didn’t want to publish only one side of the story, we contacted Your Gym, the one all the claims are directed at. And here’s what they said:

The Your Gym staff that answered us, said that what happened with the nutritionist was a misunderstanding. And that it’s highly unlikely that one of their own would do this. Adding that this had not happened with any of their clients before; and that they had not witnessed the conversation El-Garhy claims happened.

And that was also their comment on her video. 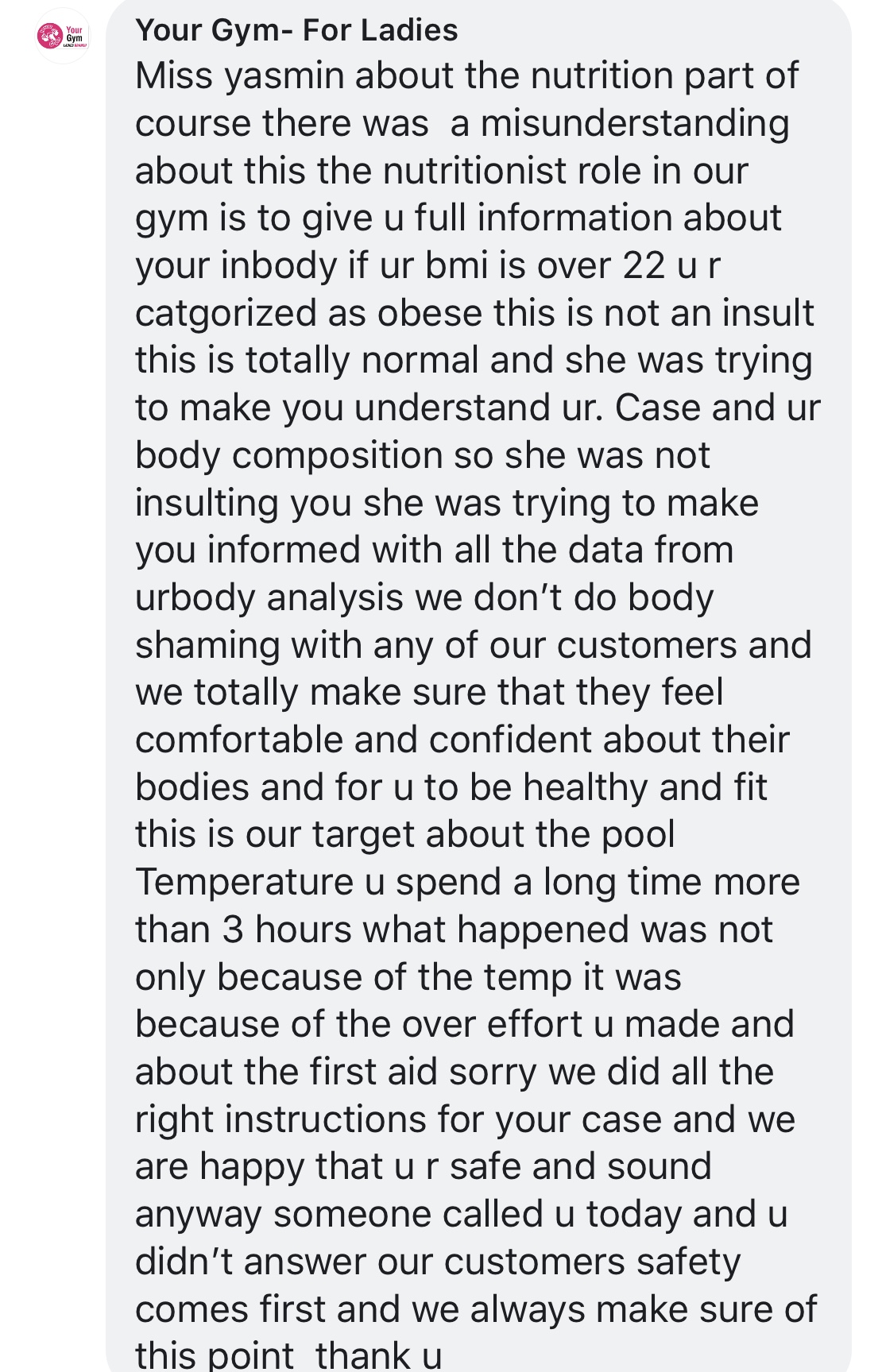 On the other hand, we were also surprised to find a few others who have faced the same unfortunate circumstances with the same gym, and other gyms as well.

Which is why we reached out to a couple of other women who faced similar discriminatory treatment in the gym:

“Last year, I went to Smart Gym, the Nasr City branch, to adapt a more healthier lifestyle considering that I’ve always been the athletic type. But as soon as I went to do the embody, things took a different turn.”

According to the woman, the ‘personal trainer’ who was going to help her, fat shamed her saying words like: “Oh my God, you’re extremely fat. How did you let yourself reach that level?”, “You need to change the way you look”, and something along the lines of “Your body has to be destroyed.” (As a reference to losing weight)

”Other than the fact that she was totally rude, she also disregarded the fact that my body is muscular because by nature, I’m an athletic person. Which already showed how unprofessional she is,” the woman said.

Of course, after this horrific incident, she never went to that gym again. And, in fact, she blocked the trainer. Unfortunately, she also felt down and unmotivated at first, that she almost made the decision to never go to a gym or try to be healthy again in order to never hear similar words.

It’s worth mentioning that after seeing her weight on the scale; the trainer’s eyes widened as she looked at the woman in disbelief. Which was – needless to say – another form of bullying.

And speaking of the disgusting looks, another woman who faced this in the same gym – but in a different branch – spoke out.

”It was around three years ago, I went to Smart Gym for ladies, the Nabil El-Wakkad branch. And just as I was about to pay and make the booking arrangements, I received a very disgusting head-to-toe-look from the receptionist when I said I wanted to lose weight.”

It’s true that this lady here was in shock that she didn’t quite understand the looks at the beginning. And that’s why she actually continued for a week straight after.

Although that during that week, no one else bothered her or did something similar but she said that she couldn’t just disregard the look anymore.

“For some reason, every time I went after that incident, I felt super self conscious. Like I’m exposed, in a way. But I didn’t understand why, because the others were friendly. However, I felt humiliated, especially that I didn’t speak out. So I simply stopped going and never went back to the gym.”

Again, because we need to get all parties involved, we contacted Smart Gym as well as Gold’s Gym to get statements from both; on whether or not this had happened and what they think of such incidents.

Smart Gym: “We never had any similar incidents. We don’t recall any form of body shaming happening at any of our branches.“

The one who talked to us said: “Personally, I know this is such an awful thing to do. But for me, if anyone did it, I would think they’re joking. Meaning that if we say things along the lines of – you need to lose weight – we would do it in the form of a joke and an instruction at the same time. But never body shaming,”

As for Gold’s gym, that we thought of contacting them as a middle party with an opinion, said that such thing never occurred at any of their branches before. In fact, they have never heard of something like that. (Meaning body shaming in gyms, in general.)

In the end, and whether or not those specific gyms actually did body shame the women; fat shaming is a horrible act and unfortunately, it occurs in Egypt in the very place where it shouldn’t; a gym. Where people usually go in order to SEEK HELP.

Being met with not just rejection, but humiliation as well is beyond anything we’ve heard of. We know bullying exists, and we’ve always stood against it. But there are some situations where your mind can’t even process how this is happening. And that’s one of them.

We really hope people wake up and look around. We hope they stop normalizing awful acts like fat shaming. Just like racism in Egypt, fat shaming has always been taken as a joke, and it really went too far now. And someone has to speak up!

And to the beautiful women who have to stand up for such acts on a daily basis; whether in a gym, university or a public place; stay strong, you’re beautiful the way you are!