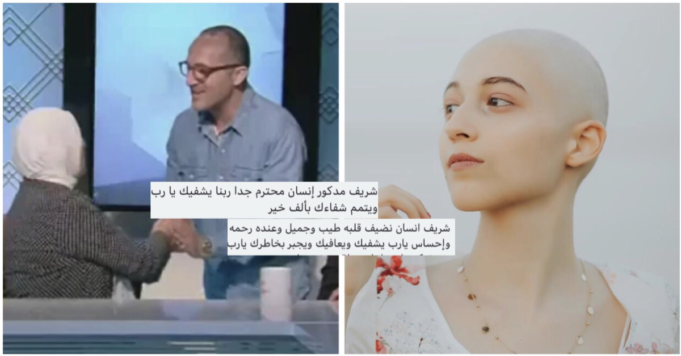 If you don’t already know, Sherif Madkour is an angel and he keeps proving it in every occasion. Earlier this year, he announced that he was diagnosed with cancer and everyone was heartbroken.

However, as he struggled with his illness, he made sure to keep his always-so-positive-attitude and warm spirit. That’s in addition to how he kept thanking and reassuring those who worried about him.

With that being said and as much as this alone emphasizes his pure heart, he did something else that warmed everyone’s souls a couple of days ago.

On August 23rd, he surprised a cancer patient on live TV. 16-year-old Merna Fathy, who was recently diagnosed with cancer went viral on the internet because of the stunning photoshoot she posted of her completely shaved head.

WITH OR WITHOUT HAIR IAM STILL BEAUTIFUL ✨ NEVER MIND ITS SUCH A CANCER💪🏻. #mernafathycancerfighter @karemelsafyphotography

And along with her mother, she was a guest on DMC’s “Misr Tastatee3” with host Ahmed Fayek.

As DMC aired the reportage they did on Fathy and her family and as the 16-year-old talked about how she’s facing the disease with all the courage in the world, Sherif Madkour entered the studio and greeted the girl and her mother.

It’s also worth mentioning how we almost sobbed because of the way Fathy’s mother reacted to the sensible surprise, as she told Madkour how much she admires and appreciates him.

Not only did Madkour surprise Fathy to offer her his support during tough times, as he always does with everyone; he also showed up with a white shirt that has her picture with the words “Support Merna Fathy Against Cancer”.

He encouraged her even more to be a fighter and flaunt it as best as she can. Because being a cancer fighter is something to always be proud of. This was also a message that Madkour wanted to send to anyone fighting cancer.

And you know what? What really amazes us is that there’s someone out there who actually cares for others while he – himself – is fighting his own battles just as hard as everyone else is.

In mid August Madkour was trying to spread all the positive vibes he could as usual. So, he directed a message at all cancer patients to focus on their happiness more than anything.

He advised them to dance after chemo sessions and to always listen to music in order to try and kick out all the negative energy.

We don’t know about you, but every time Sherif Madkour says something, he warms our hearts even more. We pray that him and every cancer patient have the strength to continue fighting and heal as soon as possible.