Identity Magazine
Home Trending Sherif Mounir vs the Internet: How Far is the Hate Willing To...
Facebook
Twitter
Google+ 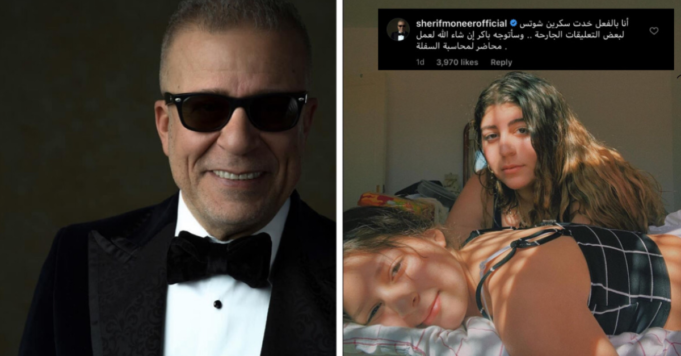 On Thursday, actor Sherif Mounir posted a harmless photo of his two beautiful daughters on Instagram. And that’s when hell so wrongfully broke loose!

As soon as the picture was posted, the hate-filled comments flooded the actor’s comment section…

It was like, for every nice comment, there were hundreds full of sick-minded insults; split between making sexual comments directed at the girls and hating on the actor for posting a “scandalous” picture. To the point that according to him, removing the picture was basically a collective family decision.

We honestly cannot imagine how they must’ve felt. Whether Sherif, the mother, or the girls themselves.

We would’ve included more of the shameful comments but the majority were really awful so we refrained from including them and even had to hide some words down below. Some people went as far as pointing out that children or not, the picture is still suggestive of sexual positions. What even?

However, in a courageous move, and despite pointing out that such comments emotionally harmed the family, the actor chose to once again, repost the picture.

And the reason why he chose to do so made us respect him ten times more than we already do! In the caption, he highlighted that he can’t let sick minds decide for him what to post and what to not post.

He also announced that he’ll be taking legal action and filing a report at the Internet Investigative Authorities. Honestly, way to go! We can’t express how much we applaud that decision.

We can’t fathom why in the world would a normal human being decide to hate on someone and write a comment full of insults directed at him and his family for posting a picture of his two YOUNG girls? Literally, a 12 and a 15-year old! Are you people kidding?

Actually, why in the world would a normal human being think that such a picture could be sexualized? Do they understand that this means they’re sexualizing literal CHILDREN?

On another note, it’s not only about sick-minded weirdos slut-shaming kids. It’s also about how they think they have a say in what would be considered appropriate and what wouldn’t.

And the worst thing about it all is the fact that they let their scumminess and shameful actions fall under the umbrella of religion and morals of the society. This needs to stop!

Speaking of religion; here’s a small example of someone who wrote a despicable comment regarding the topic and when you go on his personal account, you’d find pretentious “religious” posts. The irony!

We’re honestly so glad and even proud that Sherif Mounir refused such attitude and decided not to keep silent about it. Internet bullies and hateful people who have no honor should always be called out no matter what! Especially since most of them think what they do behind the screen can’t be reported. Well, that’s far from the truth. And that should be the case with everyone, not just when it’s a celebrity.