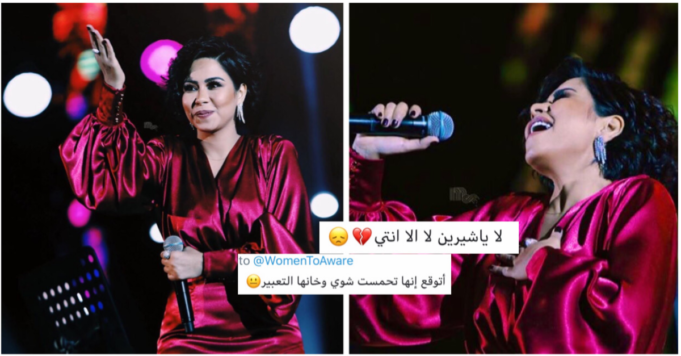 Seems like Sherine Abdel Wahab is still having a hard time saying the right words on stage. On November 14th, during her concert in Riyadh, Saudi Arabia, the Egyptian singer talked gibberish yet again.

But this time, she did not insult another celebrity like she did with Amr Diab back in Amr Youssef and Kinda Aloush’s wedding, nor did she say some very offensive words about her home country Egypt, like she did in Beirut, when she told the crowd that they might get bilharzia from the Nile River.

Actually, this time, she went as far as giving Saudi women in the crowd some really sexist advice that we’re honestly hoping is a joke.

Abdel Wahab’s exact words were: “Since we can’t live without men in our lives, then we better listen to them!”.

The worst thing about this whole situation is not only how the crowd laughed at what Sherine had said, it’s also the fact that she chose Saudi Arabia out of all countries to make this unnecessary declaration. Which angered so many people, including Sherine’s very own shocked fans!

Because what kind of an artist goes to a country where women have always been oppressed and treated unequal to men and still make such a statement publicly?

Not to mention that over the past couple of years, Saudi Arabia has been evolving and significantly changing the way women are being treated and perceived in their society.

So unless Abdel Wahab is completely unaware of what’s happening, she cannot be excused.

No, actually. Even if she’s not aware that the timing is both tricky and sensitive for Saudi Arabian women, why is she promoting male dominance and telling women, in general – Saudi or not – to literally listen to their men because they can’t live without them?

Instead of actually giving them a GOOD piece of advice that says “Stand up for yourselves, because we’re no longer going to be living in a man’s world!”

Or maybe actually just singing and doing her job without making any kind of statements, for real.

Honestly we love Sherine as an artist, but one should choose their words carefully and must be well aware of the time and place.

And in her case, one would think she’s had enough unfortunate incidents to make her learn a lesson or two. Apparently not!

Do you guys think it was a simple joke related to one of her songs and that’s it? Or are you with us that she chose the wrong time and place to promote male superiority?