Identity Magazine
Home Trending Star Academy’s Shahinaz has just been beaten up and People are being...
Facebook
Twitter
Google+ 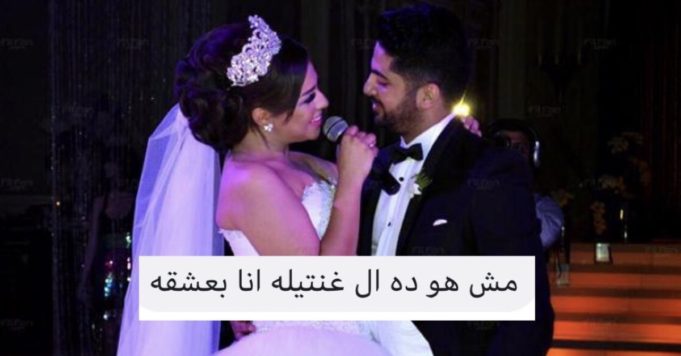 Shahinaz posted what seemed like a call-for-help-message on Facebook. They were photos of her with a bleeding nose and a beaten up face, with tears and mascara running down. 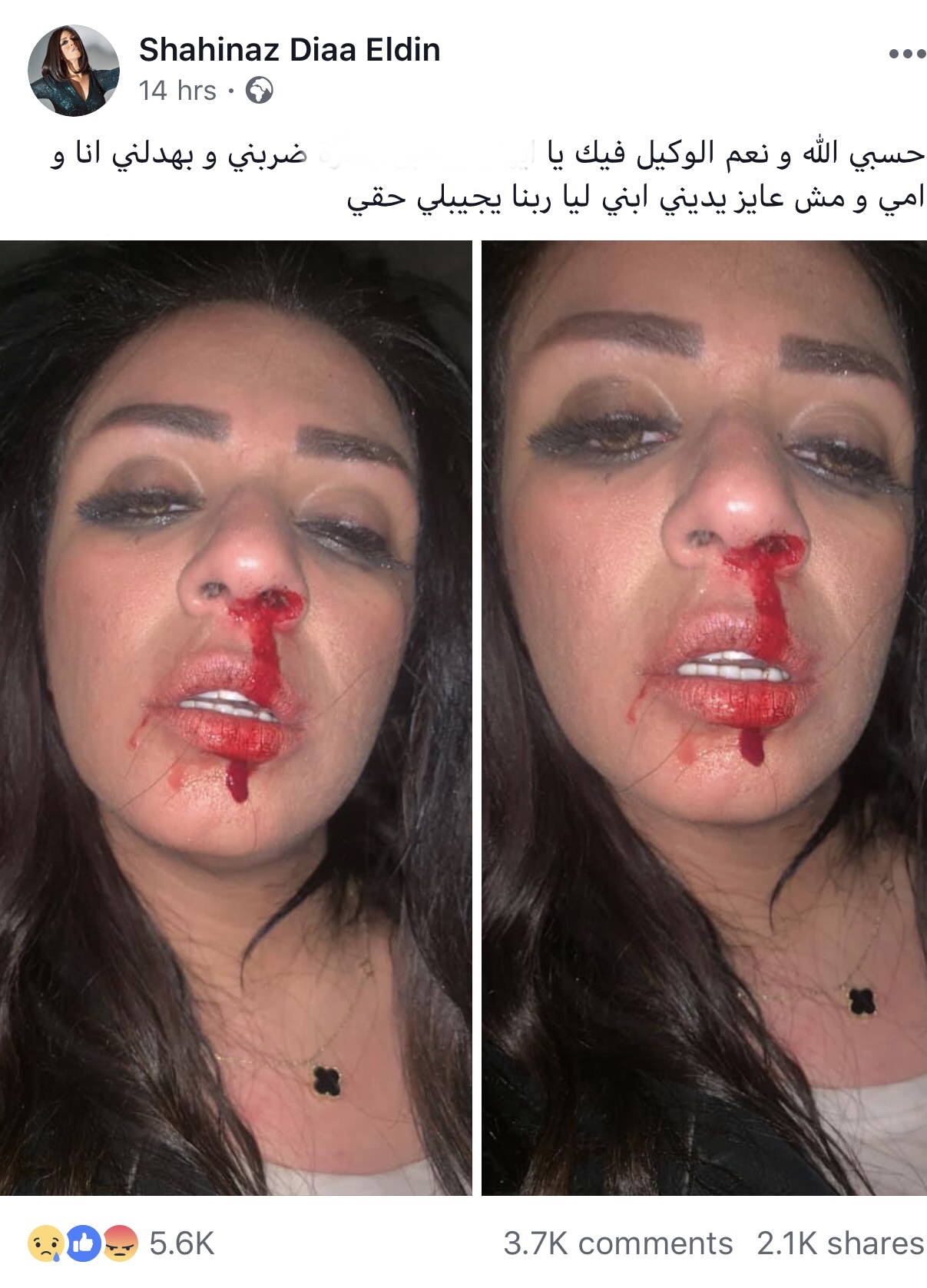 According to her claims, the singer’s businessman husband of five years has violently abused her and her mother as well.

With the harsh photos, Shahinaz also briefly told people what happened. The husband had reportedly taken away her only son Malek.

The Actual Story, as ‘Claimed’:

According to multiple media outlets, Shahinaz and her husband have been separated for two years now. It’s still not completely clear what went down between the couple.

However, what’s being said is that he was abusing her and treating her badly. He was allegedly refusing to financially support his son too.

Although the singer has been wanting to file for a divorce, she claims that he has been declining her requests. Which is why she filed a lawsuit instead, and the court will reportedly rule on Thursday, March 28.

It was not long until he too had publicly issued a response through Facebook. Defending himself and saying that: “It’s only HALF the truth,” and ‘revealing’ that she’s done shameful things he cannot expose in public. 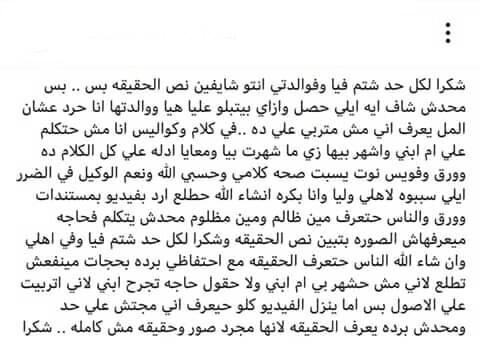 We have chosen not to reveal the husband’s name because the allegations are yet to be confirmed.

As always, there is barely anything that passes by without social media having a say in it. And unfortunately, like many other times, “the say” has NOT been fair! 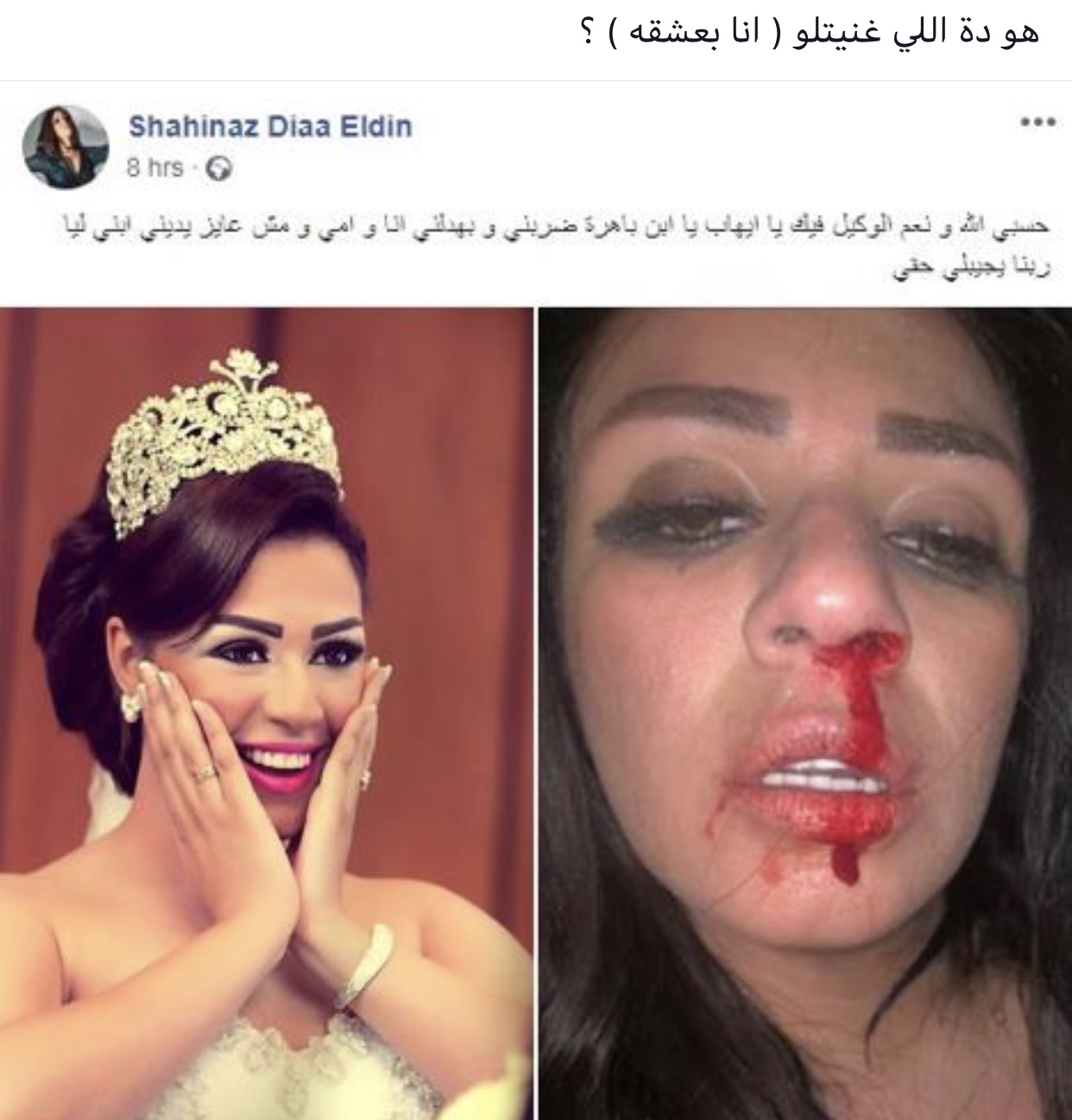 People are actually blaming her for choosing him in the first place. And making ‘funny’ comments about the fact that she sung one of her most famous romantic tunes for him at their wedding! Seriously?

What the hell is wrong with that? Don’t we all make wrong choices? Is everybody on the internet suddenly never mistaken?

And honestly, whether or not she’s telling the truth and whether or not we think it’s appropriate for her or her husband to take their family issues to the internet; it’s NOT okay – not even a little bit – to make fun of what’s happening, nor blame the woman!

This is definitely not, in any way, a matter of sarcasm! Nothing about what’s going on to either Shahinaz, her family or even her own kid is funny.

Such violence happens every day in many Egyptian households, with different variations of course! Not everybody has the same reaction to violence, and not every story is completely truthful!

Even when hearing both sides of the story, we’ll never know where the truth is! And guess what? It’s not even our job nor our business to raise red flags on people’s personal lives.

But you know what’s our job? To speak out and try to find a solution for domestic abuse.

The singer was the one to take it online; you may say. And speaking of that, according to the sources, her sister was the one who posted the pictures, as a call for help AND to let the world see what this man is doing to his wife.

With that being said, even if she’s to blame because she posted about it, why not just have sympathy?

This is violence we’re talking about and instead of making fun of the situation, why not pray for it not to happen to us or at least pray for things to find a way for the poor kid who shouldn’t be facing all this trauma?!

If we don’t want to do either of those things, we could just refrain from commenting and taking a part in it!

For instance, here we are, talking about it now but you know why? Again, simply because HERE is where we should raise a red flag: DOMESTIC ABUSE!

It’s not okay and it’s not talked about enough. It happens and the worst thing about it is that it’s not always publicly addressed. Well, actually now we have something worse and it’s how people are reacting to it!

Whether in thinking it’s funny or trying to make up excuses why she could be either lying or why the husband may have had the right and justification to do that; if he did.

Lastly, maybe she’s not telling the whole truth. Maybe the husband is being set up. However, this SHOULD NOT give anyone the right to shame her for her choices nor ‘normalize’ domestic abuse and turn this into a funny story with memes, rather than thinking about it as an actual important and concerning issue.