Let’s talk about the “Friendzone” ladies and gentlemen. It’s a term used when a person falls for someone, asks them out, then they tell them “You’re just a friend.” In reality, however, it’s mostly used by men who don’t have the guts to ask a girl out and complain about it. Others actually do ask the girl out, and keep complaining when she kindly rejects them and tells them “let’s stay friends.”

Here’s the definition according to The Urban Dictionary:

What you attain after you fail to impress a woman you’re attracted to. Usually initiated by the woman saying, “You’re such a good friend”. Usually associated with long days of suffering and watching your love interest hop from one bad relationship to another. Verb tense is “Friend-ed”.

“I spent all that money on a date, just to find out she put me in the Friend Zone (said with eerie echo).”

“You know that hot girl I’ve been talking to? She just Friend-ed me.”

The term originated from the TV show “Friends”, when Joey called Ross ‘the mayor of the friendzone’. It recently boomed on the internet and became a very popular, not just term but as some call it, lifestyle. 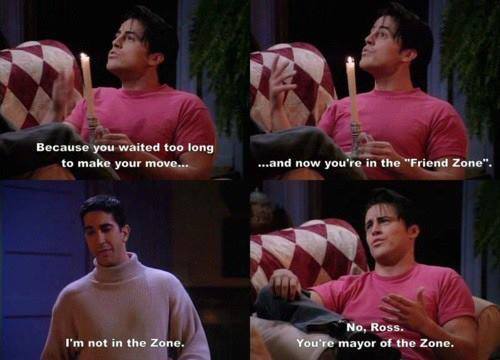 It’s a gender-neutral term, but it’s still extremely sexist, mainly because men are the ones always using it. Some women do too, but not as much as men. The reason is that women do understand that rejection is a normal thing, and most of them respect their love interest’s decision. They also don’t feel that it’s their right to be liked back by their love interest or that they owe them anything.

You love interest really doesn’t owe you anything! They’re free to reject you, and free to like you back. If they don’t like you back, then move on. Not because you paid for her drink or lunch, you expect her to jump in your bed in no time. She’s someone you want to be with, not a hooker!

Relationships aren’t only about sex. The internet is filled with stories of people “getting out of the friendzone” by actually having sex with the ones they liked. If that’s how you perceive a relationship, then you have a major problem!

You should be respecting the friendship. You should in fact be grateful you didn’t lose the person and that they’re decent enough to still keep you in their lives. If you’re not thankful for that, then you didn’t deserve them and that’s probably why you got friendzoned in the first place.

If it’s a pattern, then there’s probably something wrong with you. You don’t have to call all women bitches, or all men assholes. You might need to work on yourself, your personality, or maybe how you approach people you’re interested in.

Maybe you should suck it up and accept the rejection. Don’t blame the “friendzone.” It’s a term started by pathetic people who can’t handle the rejection. Even in ‘Friends’, Ross was an egomaniac character who couldn’t really handle any types of rejection and obsessed over them.

So before you start sharing internet memes, and joke about the friendzone, think of the term. Is it really worth it? And always remember, you’ll look desperate when you use it…