Identity Magazine
Home Trending Sudanese are Offended by Shaimaa Seif’s Blackface, here’s why You Should too!
Facebook
Twitter
Google+ 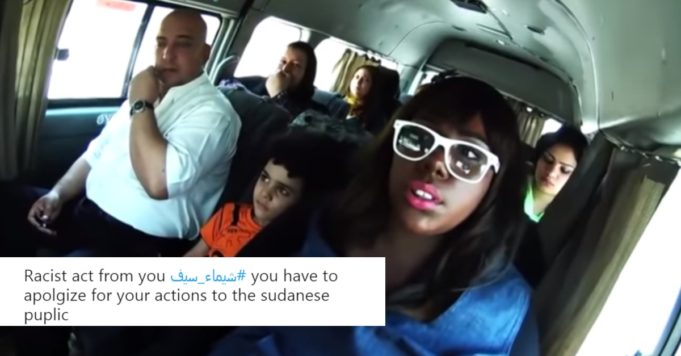 While Ramez Galal’s “prank show” is usually the one causing all the controversy and backlash, Shaimaa Seif’s prank show ‘Shaklabaz’ has recently been getting all the heat for being racist and extremely offensive.

The idea of the “prank” in the show is supposedly based on actress and comedian Shaimaa Seif appearing in a micro-bus with a blackface, posing as a Sudanese woman, and making a spectacle out of herself.

So basically, the entire punchline of this so called prank is either that she has a blackface or that she is Sudanese.

We are not sure which is worse, but we are sure both are NOT FUNNY.

Needless to say, this triggered a huge backlash from people in general, and Sudanese people in particular.

Upon seeing the ‘content’ of this show, people were utterly appalled and outraged by the extremely inappropriate and offensive nature of the ‘joke’ it is trying to portray.

And needless to say, they did not hold back their feelings.

Sometimes you ask yourself,no one in the production,filming,marketing team , mentioned that the #blackface is freaking racist and wt she is doing isn’t funny, it’s freaking racist, not even one sane person said that,it’s not a joke it can’t be aired ?? #شيماء_سيف pic.twitter.com/iBOfeuFcwd

Some even called Shaimaa Seif “empty and sick”!

And a lot were urging her to take responsibility for her actions and apologize.

Racist act from you #شيماء_سيف you have to apolgize for your actions to the sudanese puplic pic.twitter.com/j1dC4gtHGk

Which she eventually did.

After people’s anger flooded all of Shaimaa’s social media accounts, she eventually broke out of her silence and posted an apology on her Facebook page. 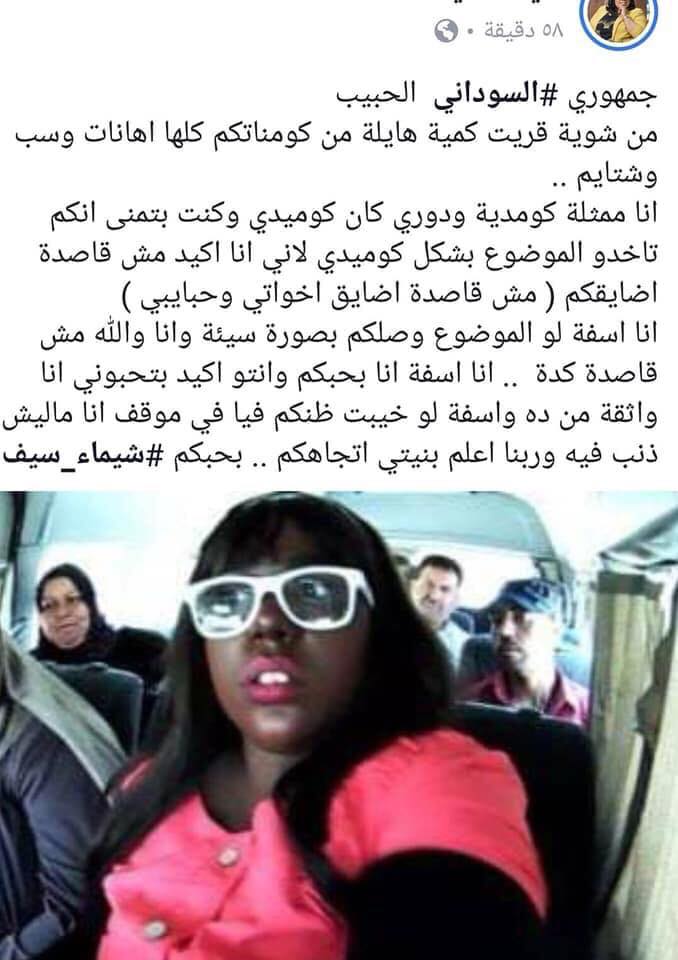 In her apology, Shaimaa justified the blackface by deeming it a joke and saying that it was intended for comedy purposes, and that no offense was intended whatsoever to her beloved Sudanese audience.

Did Shaimaa’s apology put out the fire?

Not even a little bit.

Even though Shaimaa apologized, her so-called justification enraged people even more.

I love how racist Egyptions so often fall back on the "it was a joke" defense as if it's okay to be a racist as long as YOU think it's funny!! #شيماء_سيف #الشقلباظ pic.twitter.com/4ibIarZBud

Saying that her apology is “meaningless”.

#شيماء_سيف
You are nothing comparing with the Sudanese woman, your apology is meaning less

They even started the hashtag #قاطعو_MBC_مصر boycotting MBC Masr for airing it in the first place.

While a lot might know this, this show has actually been airing for over 6 months on a YouTube channel called iComedy. However, it only recently started airing on MBC Masr last week as a Ramadan prank show.

But after people started attacking MBC Masr for airing Shaklabaz, a source from the channel revealed that the program is not a channel production and that it was bought to be aired during Ramadan.

Which quite frankly doesn’t make it a whole lot better.

Why is Shaklabaz’s content actually worthy of all this backlash?

While most people were enraged and horrified of the ‘blackface stunt’ the comedian tried to pull off in her show as some sort of a joke or prank, some were actually, surprisingly seeing it as a normal joke and not getting ‘what the big deal is’.

And for those who don’t understand why it is SO not okay, here is what you need to acknowledge and realize:

– A blackface symbolizes an entire race, a race which has had over a century-long struggle to earn the simplest and most basic of rights from their freedom to the fight for equality which is still ongoing, all due to their skin color.

The very color you use as a punchline or a joke completely  undermining the said ancient struggle.

– Historically, a blackface was used in theater and entertainment platforms as a cinematic joke or a symbolized humor, once again dehumanizing and objectifying the entire African race, and plainly disrespecting their heritage.

– When a person in the entertainment industry pauses as a person of different race, they are representing that race. So not doing the necessary research or not taking every aspect into consideration will cause a huge misrepresentation, which in turn will offend and insult this entire race altogether.

– After having insulted an entire race by recklessly prepared content, the least a person could so is to completely accept and acknowledge the feelings of the people who were obliviously offended and apologize WITHOUT GIVING EXCUSES!

Calling it a “joke” will NOT HELP in any way. shape or form. Because they know it was a joke, they are aware it was done for comedic purposes.

Guess what, THAT IS WHY THEY ARE MAD!

Why the problem is not just in Shaklabaz?

While Shaklabaz’s content is by all means offensive and derogatory, it is not the main problem.

The problem is in what made this sort of “joke” acceptable in the first place. Shaklabaz is not the first show, series, movie, or a play where the blackface has been so obliviously and ignorantly used to make a joke out of the skin color and the entire respectable race representing it. Especially in the Egyptian entertainment industry.

Which raises a bigger issue, when will this derogatory ignorant thinking stop making creative content at the expense of people’s feelings and identities?

It is 2019, and apparently someone still thinks a blackface or an African identity is laughter material!

While it is not acceptable for the average layman to be ignorant as to why this is not okay, it is far more dangerous for a ‘creative’ mind to be this ignorant. Because it is in their basic job description to be educated enough to spread awareness.

The sad fact remains that the following still needs to be said; A RACE IS NOT A JOKE, SKIN COLOR IS NOT A PUNCHLINE, AND A BLACKFACE IS NOT MEME MATERIAL. SO STOP USING IT!