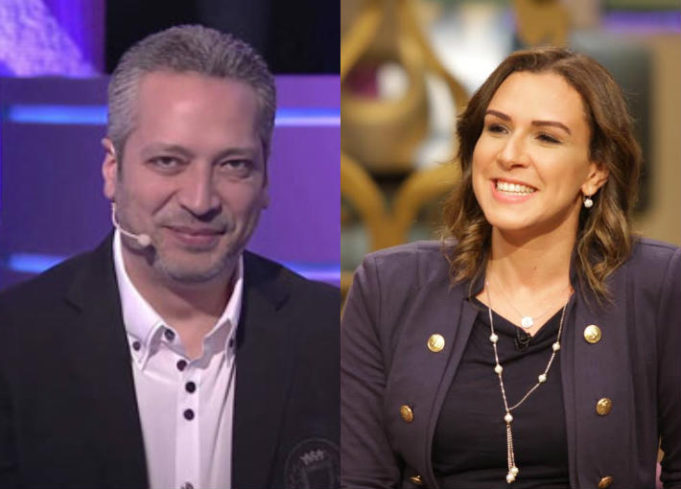 It seems like Tamer Amin is following in the footsteps of his fellow TV hosts being recently condemned for their tongue slips on air.

The Supreme Council for Women have filed a report against Amin this morning, the 25th of August, regarding his not long past episode with Rania Elwani.

A quick recap to the episode…

In the interview, Tamer Amin started by asking Dr. Rania Elwani, the Olympic swimming champion, parliament member and Al Ahly Club board member about her relationship with her husband and how he sees her career.

Sounds like any other question, however, things started escalating quickly when Amin took the liberty to comment heavily and sarcastically on her response.

Elwani answered his question by expressing how her husband is really supportive of her career and life decisions and how they split the house chores between them. And how “he’s probably now at home studying for their child,” she added.

For some reason, Tamer Amin took this answer way too personally. He took the liberty to make his own negative point of view about working women crystal clear.

Unprofessional enough as it is, he actually went on to directly address Rania’s husband attacking and mocking him for settling at home while his wife is out there making an interview. Not just that, for actually having a thriving career altogether. Like it’s shameful!

Things got even more personal when he admitted he made his own wife quit her job and stay at home. The fact that he will financially be responsible for the household, supposedly justifies such action. According to him.

All of which made Elwani pretty uncomfortable and defensive. Who would blame her, right?

She started defending her husband’s disposition and how it’s a matter of a lifestyle choice every married couple should agree on from day one.

And we would like to take a moment to backup Rania’s previous statements, whether or not a man is okay with his wife’s career path is something that is left up for each couple to decide on. Most certainly not a TV host.

In cases like Rania’s, Tamer Amin is not, by any means, entitled to comment on her family’s life decisions. Let alone ridiculing them!

Looking back, this is not Tamer Amin’s first slip on television. He made some pretty extreme comments on many social and political occasions that we feel strongly about.

Naturally, we think the legal action carried out against his show Akher El Nahar is only just. Given the Elwani interview and his long history with unprofessional-ism as well.

It is about time we put an end to hate and resentment targeting successful women in Egypt. We need to alter the media speech; to support them instead of attacking them with such ease on national television. Isn’t this something they’re supposedly teaching at media and journalism schools?