Identity Magazine
Home Trending Tamer Hosny Is Attacked For Being A Hypocrite and We See The...
Facebook
Twitter
Google+ 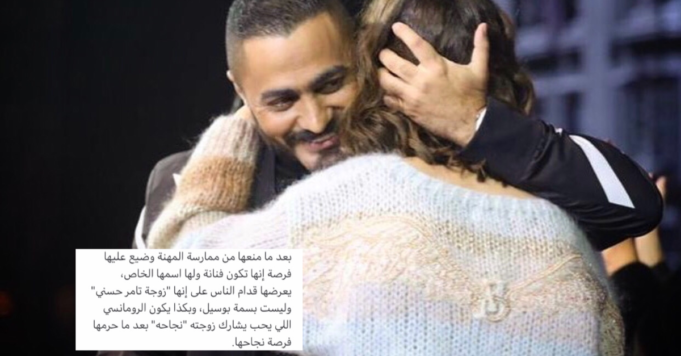 On November 22nd, a concert held at the American University in Cairo (AUC) featuring Tamer Hosny, Silento and Marwan Pablo grabbed a lot of people’s attention. But for very different and hypocritical reasons!

After Hosny got on stage to perform and laugh along with the crowd as usual, he decided to bring his wife Bassma Boussel on stage at the end of the concert to greet the audience and sing with him a bit.

However, while this specific act earned him a round of applause mostly from his fanbase, it didn’t quite appeal to a lot of other people. And do you know why?

Basically, Hosny often displays the ‘supportive‘ husband kind of persona on stage whenever he brings his wife on to share a song or two with him. And in normal cases, that would sound fine, sweet even.

But the thing is, some people believe that Hosny isn’t really how he makes himself to be in front of the crowd. Like, how could you believe that he supports his wife and that he’s okay with her singing in front of the audience when he presumably killed her talent ever since they got married?

We’re only stating facts here because the couple had initially met when Boussel was in Star Academy 6, back in 2009. And we don’t even need to explain why she was there. Obviously because she wanted to showcase her great talent at singing and become an artist!

However, things didn’t go as planned when the couple got married in 2012. Ever since then, we didn’t hear from Boussel. She shifted careers and moved to fashion design and makeup instead.

Until now, she releases covers of her husband’s songs every now and then and sings with him on stage as you all just saw.

That said, we definitely don’t know what happens behind closed doors and we know that maybe she was the one who decided to give up on her singing career. But again, for what?

It’s great that she shares her husband’s success, but what about her own? What about the dream she chased after in 2009?

We don’t want to presume things, but because we’re in Egypt we know how Egyptian men perceive the idea of women being in the entertainment scene.

Take Ahmed Fahmi and his wife with the amazing voice Amira Farrage as an example.

Fahmi publicly admitted more than once that he was against her singing and being a famous artist, and she agreed to his conditions from day one. Which is fair. Awful but fair…really?

Here, in Hosny and Boussel’s case, we don’t know whether he was the one who absolutely forbade her to pursue her dreams while she was with him or was it her that decided to give it all up to be the good wife who took care of the children.

In all cases, our point is that it just feels strange when he brings her up on stage to sing while we all know that she once had a dream, and we’re now unaware of the real reasons she quit singing altogether. Because the picture that’s being drawn is just not sincere.

We honestly hope we’re wrong and that Boussel just decided to give it up for reasons other than her husband and marriage, because we’ve really just had it with men telling women what to do.

What’s your take on this guys? Do you agree with us or do you see it differently?