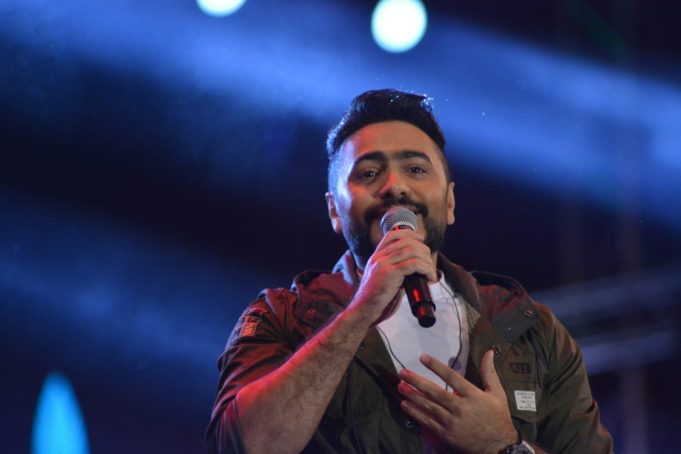 On Friday November 9th, Tamer Hosny hosted his first concert post ‘recovery’ at the American University in Cairo’s (AUC) New Cairo campus. Like most of the attendees, I was very excited about this concert. Especially that it comes following the huge success of his recent album ‘Eish Beshoak’.

However, as much as the concert itself was really awesome, it was incredibly obvious that the megastar was just not well.

Earlier in October, Hosny suffered a vocal chords emergency and was rushed to hospital after shooting his ‘Sahbet El Saada’ episode with Esaad Younes. His official Facebook page then announced that he might need to undergo surgery, and he had to cancel his CIC concert last minute.

His AUC concert was his first one post recovery. From the minute it started, the singer/actor seemed as if he was forcing his voice out the whole time. Instead of making a huge entrance with the usual ‘Omry Ebtada’ hit, Tamer Hosny got on stage, calmly thanked people for coming and then asked them to help him sing since this was his first concert post recovery.

I honestly thought ‘how cute, of course we’re going to help you!’, not thinking that the guy was actually really sick. When he began with the first song, his voice sounded almost completely broken that it saddened everyone.

Yes people did help him sing the whole time in the end, because naturally they know all the lyrics and have to sing their hearts out as usual. But most importantly, it seemed as if they were trying to lift him up more than anything. 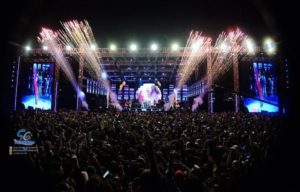 Apart from his voice being really low and cracked up half of the time, there came times in the middle of the concert where I though ‘Omg, did something happen to him on stage?’ before looking and checking if he had actually fainted or something. 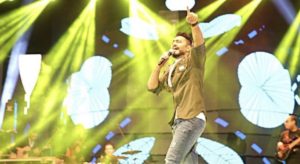 The reason was because sometimes his voice would completely trail off all of a sudden in the midst of a line, and you would only hear the people screaming the lyrics. This happened around three times.

When the concert was nearing its end, Egyptian actor Maged El Masry, who appeared with the singer in his recent movie ‘El Badla’, got on stage to cheer the people. And before getting off, he said something about Tamer’s voice being one of the most beautiful voices in the world and that’s when the singer had a half smile on his face. It was quite heartbreaking. It really seemed that he was not okay or did not completely recover.

What makes me think that even more, other than the fact that this opinion was shared by many other attendees; is that Tamer Hosny is used to cracking jokes and having a high positive energy the whole time in his concerts. However, this one was not like that. Don’t get me wrong, he still put a huge effort in it though!

HE REALLY NEEDS A BREAK

Okay, moving on to what we want to say here: There’s ABSOLUTELY no problem or shame whatsoever in taking a break from all of this. The superstar has been releasing one album after another, doing one big concert after the other while shooting and releasing a movie, in addition to the interviews, the traveling and all this hassle. Also his newborn baby was definitely the cherry on top.

All of that -mostly the concert of course- made me think that the singer/actor has been severely neglecting his health, risking his vocal chords and putting in all this huge effort to make his fans happy and to not let anyone down. Well, it’s nice and all, but it also needs to stop! Don’t you guys think?

He really needs to take his health issues more seriously before it all goes wrong. For a singer to undergo vocal chords surgery, it is a serious matter, right? Who knows what repercussions it might have in the future?

We come with good intentions; we are huge fans and hope the guy continues to create great records! But we seriously think he needs a proper break, do you agree?

For the full article about Tamer Hosny’s illness refer to: Identity Magazine