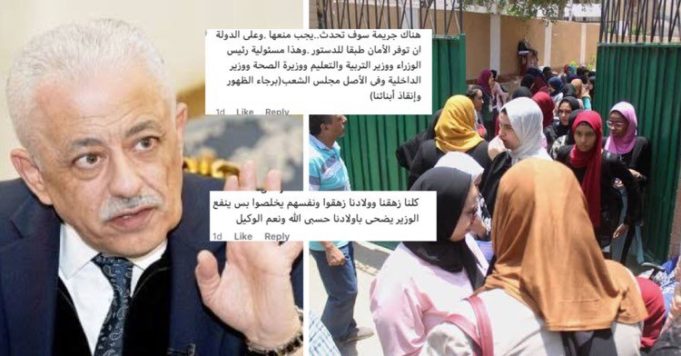 For months now, the Thanawya Amma situation has been the talk of the town. But with the Covid-19 rates in Egypt recording an unprecedented spike, pleads are everywhere calling for the postponing of the Thanawya Amma exams or at least finding an alternative less risky way of taking the tests.

On the other side, Minister of Education Tarek Shawki adopted the philosophy of “rip the band-aid now” and basically ignored the parents’ call-outs. Justifying his decisions by assuring how the ministry is implementing strict safety protocols. Is it enough, though?

Here’s a homemade video uploaded by a concerned Thanawaya Amma parent, explaining the appalling mental and psychological condition his daughter is currently going through in fear of the upcoming exams!

Everyone knows what a nightmare Thanawya Amma is, normally. The stress and anxiety, the physical and mental fatigue, and all the pressure that comes with it too. Now, imagine what those kids might be feeling having to go through all that, AMIDST A WORLD PANDEMIC!

A world pandemic that, at the very least, threatens their lives and the lives of their entire families. We’re talking thousands of people here! What’s an exam, really?

Plus, no one is actually calling for the cancellation of Thanaywa Amma exams altogether. It’s a matter of timing that’s all. What could possibly go wrong if we push the exams to, let’s say, September?

Yeah, we get how the whole college-applying process and the entire school year will be deeply affected. BUT SO WHAT? A global emergency calls for some drastic actions. This is just one option, there are plenty of other options the ministry could resort to right now. So, why aren’t they?

Yesterday, June the 8th, the Minister announced some of the safety and disinfecting measures planned for the students. Disinfection gates, mandatory masks, and heat measuring; are basically a given by now. Most malls and hypermarkets do that as you walk in, and that didn’t stop the spreading of the virus towards a peak, did it?

Now, we speak directly to parents, if the ministry carries on with the announced arrangements, you have a right to say NO. Sit down and have a talk with your son or daughter and agree on what’s more convenient for them and your entire family.

If you both agree on waiting another year, as suggested by the ministry, that’s okay. Even if not, and you decide to take the exams on time, we’ll all hope for the best. Just honor your child’s wishes and your family’s safety during these tough times.