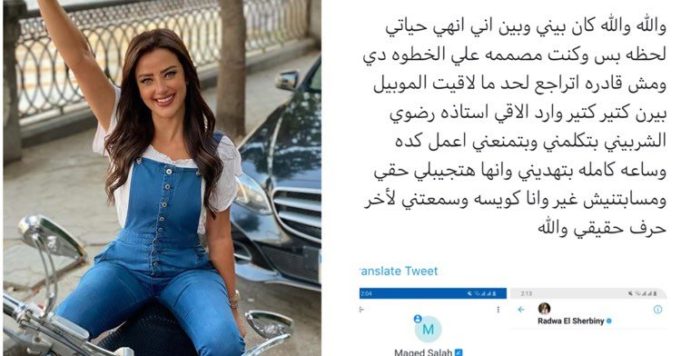 Two days ago, A girl on Twitter anonymously spoke about how she was repeatedly raped by her older cousin as a child and how this trauma ruined her life. Somehow, her identity was revealed and her family disowned her.

After admitting in her tweets how she is now dealing with suicidal thoughts following the escalating events, her sister asked her not to come home after the “scandal” she caused.

Homeless and alone, the girl said she is on the verge of suicide. Until she received a call from Radwa El-Sherbiny- who stumbled upon the girl’s tweets and saw it as an urgent cry for help- and immediately acted on it!

It’s no secret that we, as Identity Magazine, are not exactly fans of Radwa El Sherbiny’s approach to feminism. And that’s okay, we don’t have to be fans to acknowledge her social efforts and activism!

In a follow-up tweet, the girl explained how El Sherbiny had an hour-long conversation with her. Soothing her and lifting up her spirit and promising her a helping hand.

Now, the girl is in direct contact with the National Council for Women and is getting proper treatment and housing.

This is not the first time Radwa El-Sherbiny acts on behalf of women, she has done that on a number of occasions. Her latest initiative and constant outspoken support of rape and harassment victims is a case in point.

Making her emerge as a true force of women’s empowerment and gender equality in Egypt. Honestly, we just love how Radwa continues to hold up the banner all by her self, and not just through words but actions too.

Thank you for showing us how celebrities should be using their platform. Thank you for setting a bar that we hope would inspire others to make a tangible change.

For anyone with a recognized social media outlet, now is the time to use it in favor of the people, and especially women. Your help can, literally, save lives.