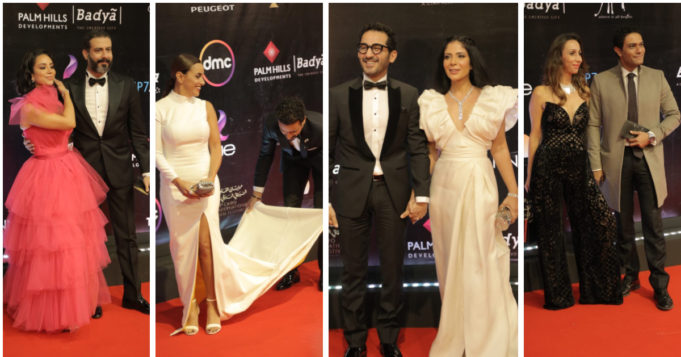 The 41st edition of the Cairo International Film Festival (CIFF) kicked off on November 20th, and we can’t tell you enough how stunning most people looked in the opening ceremony. Especially the Egyptian celebrity couples who rocked the red carpet.

Which is why we decided to bring you a list of the top 10 celebrity couples who graced the CIFF’s first night!

Honestly, who else could top our list? The most famous Egyptian power couple Mona Zaki and Ahmed Helmy stunned us with their combined dreamy looks on the red carpet. And it’s actually been quite a while since we last saw those two together!

Dare we even forget to include those two on our list? Lately, they have kind of been THE definition of power couple. Barely anyone can get enough of Ahmed Dawood and Ola Roshdy’s fun moves and sweet gestures on the red carpets!

Those two have quickly become everybody’s favorite celebrity couple! Ever since Mohamed Farrag and Passant Shawky announced their engagement in September, people have been admiring the couple and their love for each other that shows from time to time on social media!

As usual, Asser Yassin and his always-so-stunning wife Kenzy Abdallah graced us with their presence on the red carpet. And because they never fail to live up to everyone’s expectations when it comes to looking glamorous on the red carpet, they rocked it this time too!

The red carpet has been missing those two love birds, BIG TIME! And we can’t express how happy we felt seeing them together after a while – looking so stunning and elegant!

#6 Khaled El-Sawy and May Karim

Khaled El-Sawy hasn’t only been winning red carpets, but he has been winning our hearts as well. And we honestly can’t get over how cute him and his beautiful wife, May Karim, looked!

There’s hardly anyone out there who doesn’t ship Ahmed Fahmi and his beautiful wife with the amazing voice Amira Farrage. And it’s looking like people are going to ship them even harder now after looking incredibly sweet on the red carpet!

This couple honestly deserves more appreciation! They have been going strong for so long and this time they didn’t come to goof around on the red carpet, as they were one of the couples that stole the show at the 41st CIFF!

#9 Hussein Fahmi and His Wife

Egypt’s most handsome man graced the red carpet with the lady he recently tied the knot with. And even though we have no information on her name, we can safely say that they both looked precious!

Hanan Motawie doesn’t always show up to red carpets, but when she does, she shuts it down. And this time, it was with her husband whom she recently had a beautiful baby girl with!

There you have it! Those were our picks for the best celebrity couples who stole the show on the CIFF’s red carpet! And we honestly can’t wait for the closing to see more of them. Which ones are your favorites?