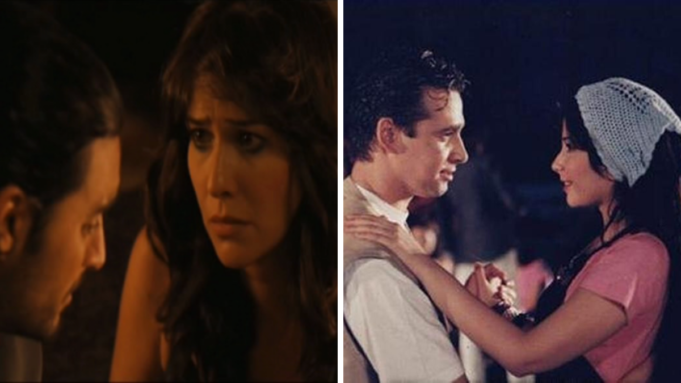 Everyone loves a good love story, right? And why wouldn’t we? With all the heroic journeys, character development and arcs, and romance, it’s hard not to lose ourselves and get a little invested.

You know, though, there’s something better than a good love story. A great love triangle with twice the love to go around.

You’ll see what we mean. Here are our favorite Egyptian love triangles.

Come on, we all know this gem. Caught between a guy who’s good for her and someone toxic to the bone, Engy definitely had more than one choice to make and we all enjoyed watching as she made it, undercover cop plot going on and everything.

Because Engy’s choice was extremely easy and she kind of didn’t take much time to consider her options, we’re ranking Basha Telmeez the bottom of this list.

A movie full of one man’s romantic conflicts and troubles, Wahid Sahih was a given on our list, more specifically the love triangle between Amira, Abdallah, and Mariam.

This conflict was especially gripping because Abdallah really struggles between choosing someone he loves and someone he pretends to love.

Though the story is incredibly realistic and somewhat thrilling, Wahid Sahih doesn’t rank higher because, well, the choice gets made for Abdallah rather than he himself making it.

We’ll admit, one of the best parts in Hob El-Banat is when Moheeb discovers he’s kind of falling for Roqaya, who might be feeling the same way even though she’s seeing famous actor Karim.

One thing that makes this particular love triangle intriguing is that Roqaya, for the most part, kept going back to Karim and fearing having a relationship with a decent man.

In a way, Leih Khaletny Ahebak is the gift that keeps on giving. This love triangle might even still be going on now, since Dalia didn’t seem keen on giving up the chase for her ex Hesham, who seems oblivious to her attempts, sometimes by choice.

Because Dalia didn’t only go to lengths when she befriended her ex’s fiancée and actually went on to very actively try to ruin his wedding, we’re ranking Leih Khaletny Ahebak at a solid two.

Yes, we’re ranking Enta Omry here at number one because this movie’s love triangle was so twisted, unwavering and, quite frankly, shameless that we couldn’t take our eyes off it.

See, Youssef spends about two-thirds of the movie suffering from full-blown angst over staying faithful to his wife or cheating on her so he and ballet dancer Shams can defeat their mysterious illness.

Are there any we missed?