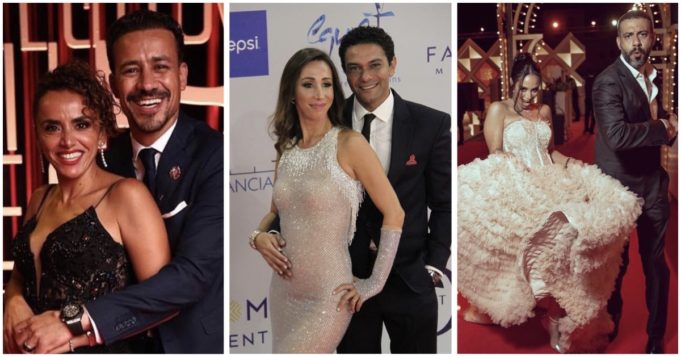 Back in the days, the definition of ‘power couple‘ for Egyptians lied in the beautiful relationships of legends like Faten Hamama and Omar El-Sherif, Samia Gamal and Roshdy Abaza, Shouweikar and Fouad El-Mohandes…etc. And the list goes on.

Nowadays, we have new Egyptian couples whom we all love so much and ship so hard. Which is why we decided to write an appreciation article to the current power couples in the Egyptian entertainment scene.

People have been loving these two for so long already. Especially ever since Roshdy started her YouTube channel “Weghet Mazar“. After we got up close and personal with her and her kids, we fell in love with the whole family.

Not to mention Roshdy and Dawood’s amazing chemistry and unique interactions that we’ve seen a lot of on the Gouna Film Festival’s red carpets. In addition to their cute family trip photos of course!

We’ve always loved those two! And they stunned us this year on the Gouna Film Festival‘s red carpet. Although we don’t always see much of Kenzy in public, the internet just loves her and Asser’s relationship as well as their cute gestures in pictures.

Let’s all welcome the new power couple in town, everyone!

The newly engaged actors Mohamed Farrag and Passant Shawky went public with their official engagement in the opening ceremony of the Gouna Film Festival. And everybody was in awe!

It’s true that the couple have been together for quite sometime before that and people were already shipping them; now, everybody’s shipping them even harder. It’s been a while since we’ve last seen two people who fit each other so well!

Not to mention how Farrag always talks about how Shawky is always there for him in the good and the bad. They’re each other’s support system!

With all the controversy that surrounded this relationship when everybody first heard about it, people now just can’t get enough of Amr Diab and Dina El-Sherbiny’s sweet connection.

Before they hit the two-year-mark, the couple did go public but they never addressed each other nor their relationship. But now, we rarely attend a Amr Diab concert without El-Sherbiny’s presence and there’s barely any new love hit that doesn’t refer to her.

That’s, of course, in addition to El-Sherbiny’s sweet words about how Diab is such a supportive and incredible partner!

Remember when Amr Youssef and Kinda Alloush first announced they’re getting married? Even before that time, everybody was keeping an eye on the ‘potential’ couple. And we shouldn’t forget about the beautiful wedding everybody was so keen to see pictures of!

Now, not only are they one of the beautiful power couples we so love to see together, they’re also amazing parents to a sweet little daughter!

And there you have it! Those are our picks for the Egyptian power couples everybody is now loving and shipping! Do you have others in mind that we didn’t include? Let us know!