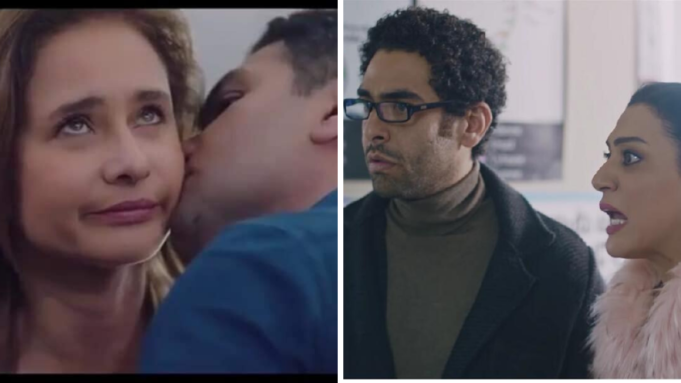 Okay, so we’re going to keep it real with you. This Ramadan’s TV shows lacked a lot in terms of plot and character development…and, yes, they lacked just as much when it came to romantic relationships. We wrote a whole article about it.

But, you know what? Just because the negatives are present (way too present at that), that doesn’t mean we can’t celebrate the positives because, as rare as they are, the positives exist.

Sokar and Omar from Bi 100 Wesh

We know, we know. We’ve all called it happening from the first “hey Sugar” on the show, but you know what? That doesn’t make it any less cute.

Another 100 Wesh relationship we’re here for is, obviously enough, the one going on between Radwa and Zizo! Starting from little things on the side of every gang scene to going full-blown relationship-status, theirs feels like one of the most natural relationships on TV this year. Can you imagine all that chaotic energy on a date?

If you thought the greatest couple on W Ne7eb Tany Leih was Ghalia and Murad, let’s just tell you this now. You thought wrong. How could you think that when Aisha and Mo’tasem were right there?

Aisha starts off the show as being burned by love and society but as she lets herself love again, she grows back into her old self before all the bitterness and the harshness of reality set in. All while, getting a solid relationship with a good, understanding doctor too!

It should be a little ironic that on this show that warns us against too much technology (and a world-wide conspiracy featuring the Antichrist because it’s Youssef El-Sherif), the only relationship that seems to come from a place of love is Sabah and Robo-Zain’s.

Sure, he’s a robot programmed to love her (and still helps her even though his programming reversed, somehow) and she’s obsessive, but then again the main lead and his wife can’t tell their real spouses apart from robots so…

It’s the year of single moms this Ramadan because each and every one of them is getting a full-fledged chance to take charge of their own lives and confront society and their families while at it. And we love it.

While we have…thoughts on the show itself, Archimedes and Jailan’s relationship seems to be the only one that’s perfectly developed, with each sharing and understanding the other’s baggage and life completely.

Allow us a second to explain here. While this may not be a relationship in the traditional sense, we’re actually quite concerned about the whole Fathy and Supreme Evil thing.

In some Ramadan dramas, un-problematic love is in the air!