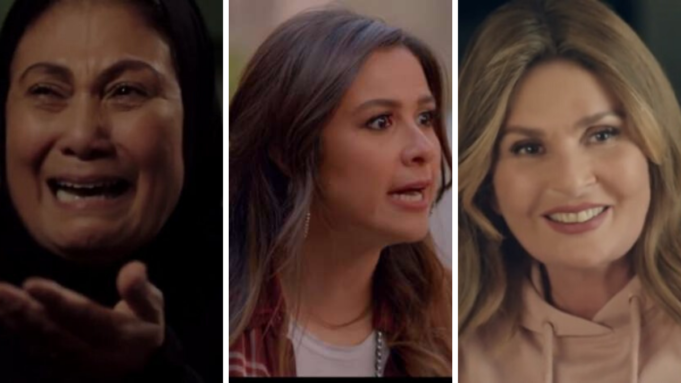 What does a mom want, you know? Does she have personal motivations? Is she a good person or a bad person? Well, we got all that and more this Ramadan because of the infinite mothers around.

So naturally, we decided to rank the best and worst out of them, character-wise. Get ready, this is going to be fun!

Although we spend a few scenes trying to understand these two women and their moral grayness, can we really “get them”? Sure, we get why they don’t want to get involved for their kids and all, but they’ve proved they’re more than willing to stand by and let evil happen. Making them evil too.

And it’s no exaggeration. One of them actively cut off one of her sons because of who he was married to but all the kids actively murdered two innocent people and the mother duo said “what else can we do?” like they’re powerless. That makes them horrible people, no question.

Another mother who’s not the best, Roqaya doesn’t give us much reason to doubt her mothering skills. Old-fashioned and traditional (it is the 80’s, after all), she is not above abuse and reserves her best treatment for her only son — and even he is yelled at because he won’t get over his amputated leg.

Just check any scene with her daughter Nagwa or her neighbor Badreya and you’ll understand what we mean.

Okay, we’ll admit it. The only reason Afaf from Valentino is above the mothers from El-Brens and Layaleena is that she is not physically abusive and does not condone murder.

However, she does condone completely controlling her children’s lives to the point where they’re caricatures of the people they could be. And she expects them to apologize for feeling bad about that. Here’s to hoping she learns something in the next few episodes.

From what we’ve seen of the moms on 100 Wesh so far, it’s safe to say we love them a lot! They’re realistic wholesome mothers, who aren’t above pettiness or showing their children some love. Sure, we don’t see them a lot but they’re so refreshing and funny, we wouldn’t even mind seeing them participate in the con-jobs.

3- The core cast of Sokar Zeyada

Let’s get one thing out of the way really quickly. This show is bad, okay? If you’re not watching it, fully aware of the cringe involved, you’re not going to make it. Okay? Agreed? The core characters are still examples of great characters, though.

Here’s the thing that no one seems to get. When people age, they’re still people and they’re still allowed lives. They can be something other than somebody’s mom or somebody’s grandma. Yes, even when they’re 80. They’re allowed to have fun and live large and we’re thankful for this show for at least showing that.

We can sum this up in three words and say “well, it’s Yousra” and we’d be right. But here’s why Ahed’s character itself is kind of great too. She’s human. Plain and simple. She had a weird childhood, a weirder family tree, and a murdered husband. She has legal troubles, old rivalries, and tries to be a generally good mother, sister, and aunt.

And not to mention, she’s about to go on one of the greatest revenge arcs this Ramadan and we know it’s going to be legendary. Let’s root for her.

Aside from the show’s problems, W Ne7eb Tany Leih succeeded in showing us an important thing. A woman living her best life and being completely unapologetic for it. Not only that — she is a divorced woman and recently single mom who can, shockingly, live her life without the stigma of divorce and can even fall in love again if she wanted to.

Yes, we know this is kind of the bare minimum, but for Egyptian TV it’s a landmark. The show has…issues but, at least, Ghalia is three-dimensional.

Some of them went too hard…others are just horrible people.