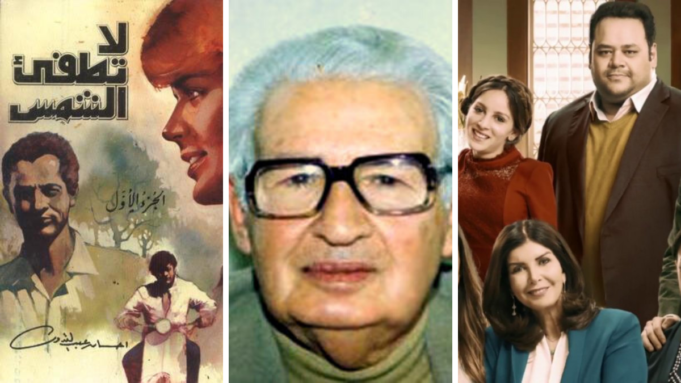 Have you ever taken a moment to imagine how different Egypt’s cinema and TV would have been if it wasn’t so affected by literature? If you’ve thought ‘eh, well, it couldn’t change that much’, you’d be way off.

See, there are many great Egyptian novelists out there and we’d all be lying if we said that if their works didn’t exist, our entertainment industry would suffer.

And, among these many great authors, is Ihsan Abdel Qudous, of course!

If you think that everything this man has ever written was adapted to TV or film, well, you wouldn’t be mistaken but there are 7 specific adaptations whose importance we cannot deny.

Reading this, you might notice something special. Of the many entries here, Embratoreyet Meem is the only one without a novel poster. Mostly because Ihsan Abdel Qudous wrote it as a four-page short story.

So how did it get an adaptation that’s kinda all but called an Egyptian classic? Well, the author himself wrote the screenplay and puffed it up until we got a perfect comeback for Faten Hamama.

Though adaptations tend to be a little different than their source material, Ana 7orra didn’t go off-script too much. As a movie and as a book, the story succeeded in channeling all the truths and unfairness Egyptian women dealt with at the time, perfectly.

Okay, so this adaptation in particular could be more labeled as a “rewrite” or “an inspired by work” because the screenwriter responsible for Lan A3eesh Fi Gelbab Aby took the original novella and ran with it, creating an entire world out of a few throwaway lines here and there.

Here are the major differences: Abdel Ghaffour and Fatma aren’t main characters and their story from the first few episodes isn’t even mentioned in the book. The kids also have another brother, Abdel Sattar and guess who‘s struggling to live outside Dad’s shadow? Nazeera, who is the main character of the book, alongside Hussein, Abdel Wahab, and Rosalyn.

When this novel came out, the public was shaken, simply because this was the first time we’ve gotten an actually evil female protagonist. So, when the movie was announced everyone largely anticipated it and got exactly what they’d expected…just with a few changes.

Although this adaptation is actually pretty close to the original book, censorship laws insisted that the protagonist ending changed into something worse to match her villainy. Yes, this is why she was burned.

An adaptation that was guaranteed instant success because of one Soad Hosny, Be’r El-7erman is another Egyptian classic that channels a lot of complicated family dynamics and the concept of the “three faces of Eve” — and here’s a bonus fact, it’s one of the few adaptations that didn’t change too much from the source material.

You remember this one, don’t you? Easily the most adapted novel on the list with both a film and a TV show, La Totfe2 El-Shams is one of the many Ihsan Abdel Qudous novels that heavily impacted entertainment.

And, yes, by the way. The TV show adaptation kinda of outshines the movie since it doubles its efforts to re-imagine the story and make it realistic enough for today’s era.

You can just imagine the controversy this novel brought when it was first published, so just take a moment and imagine the uproar following the adapted movie, which stuck to every little point the novel made like glue.