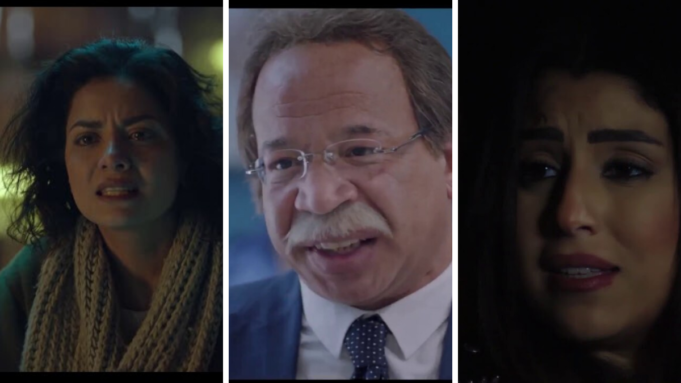 Since we’re all pretty much glued to our TVs and laptops, we know we’ve all been passing out judgment indirectly about the acting in this year’s Ramadan shows. Not in a mean way, but in “oh, we’re actually onto something here” type of way.

Sadly, though, there’s no definite list out there about all the top-level, hats-off performances out there this season. Or there wasn’t until we decided to compile that very list right here for your reading pleasures!

We don’t have these 7 performances ranked but, honestly, we don’t think we can do that even if we tried. Take a look and see for yourself.

If you’re watching El-Nehaya (or you’ve just been on the internet), you’ve probably noticed Sahar El-Sayegh’s stellar performance as Sabah.

Capturing our hearts by being among the most relatable characters with her one-sided love story, Sabah truly delivered when it came to explaining herself. So much so, you couldn’t help but take her side as she made an illegal android copy of her love interest.

The man of the hour! We have to admit we did not think we were going to be Team Seba3y when we first started this show, but come on? He’s a combination of anxiety and unintentionally witty one-liners bundled up in one human with excellent delivery — how could we not root for him through two failed fraud attempts?!

Actually, the entire cast of 100 Wesh

Okay, so Seba3y isn’t the only star of 100 Wesh. In fact, as the show goes on, you won’t be able to pick out which character is your favorite. Is it the human migraine that is Naglaa or is it the bundle of excitement that is Radwa? Maybe it’s the barely-there-but-still-totally-focused Zizo?

Honestly, we don’t know and we don’t care. Everyone from the masterminds to the mother-hacker stole our hearts and we’re actively rooting for them in all their fraud attempts. No discussions.

We may not like Riham. In fact, we may actively hate her the most in a show with a lot of things to hate. We’d be lying if we didn’t say that’s a job extremely well done on Ayten Amer’s part, though — especially when this was a character that could have been easily made super-sympathetic.

Sometimes, a series’s best performance is the default villain. And sometimes, she will inspire such an ire (and a ton of memes), it’s basically a reason to watch the show.

We may have a few bones to pick with Layaleena 80 regarding its pacing, but we have nothing but good things to say about Khaled El-Sawy’s Galal.

Look, it’s very rare that you get to see a character who very intricately reminds you of the quintessential Egyptian uncle, but Galal effortlessly does that. And this isn’t the only layer to him either; we still have a lifetime supply of trauma to get through so we know this ride keeps going up.

If you’re watching Lama Konna Soghayareen for Khaled El-Nabawy, you’re definitely not regretting it. What’s better than seeing Khaled El-Nabawy as a lawyer hell-bent on getting his brother out of a murder case than seeing him do that with his unbothered energy? Nothing that’s what.

Morally grey characters have been a hot topic in a few TV shows here and there but we don’t recall seeing it directly linked to motherhood and a woman who’s three seconds away from a total meltdown, do you?

See, that’s exactly who Salwa Othman is on El-Prince. A long-suffering mom and wife, she’s torn between reporting her murderous children (yeah, that happens) to the police and keeping quiet to keep them safe. All while giving the mother of all screaming tirades in a display of cutthroat acting.

Never say Egyptian TV doesn’t have the IT Factor!