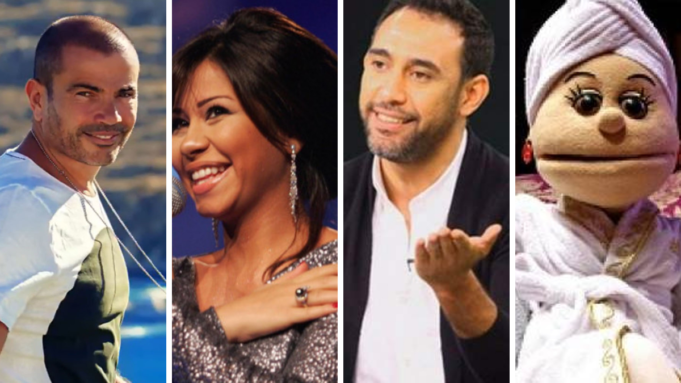 We can safely admit that even though we have a bunch of varied interests, we still get oddly engrossed in other people’s drama. There’s just something oddly satisfying about having details about a feud you’re not involved in, especially if the people involved are famous.

To satisfy our curiosities and yours, we’ve gathered up the weirdest celebrity feuds involving Arab celebrities.

This one is more vintage compared to others involved, but you know what they say ‘old is gold’. In this is case, old refers to this feud being more than 30 years old.

Shahine would later go on to star in a TV show called “Negmet El-Gamaheer” with El-Guindy fighting to change the show’s name until it was broadcast. Yeah, we know.

According to Abdelaziz, she was having trouble sleeping in her Sahel home because of teenagers having a party where she was cursed at and hit by Selim’s daughter.

Her response? Call the cops to arrest an underage girl at school, of course. Naturally, this turned into an all-out lawsuit that was resolved by the interference of both actors’ famous friends.

Who can forget a moment that is now immortalized in meme history? Certainly not us and definitely neither one of the two men involved.

This feud started as a heat of the moment thing when football commentator El-Tayeb admittedly went too far with remarks about Shobeir’s wife and kid. Naturally, this went in the worst way possible and a physical fight broke out.

This feud is strange for many reasons. The first being that it’s still ongoing, neither party is willing to stop, and everyone is okay with that.

Ahlam and Ragheb Alama’s feud started way back when Arab Idol was just starting out and each star thought they were the leader of the judges.

Naturally, this turned to a number of petty squabbles that took a break when Alama left the show. Currently, both stars are still at each other’s throats in the new season of The Voice.

Naturally, beef queen Ahlam has had other fights, but we can safely say none was weirder than her last fight with her now ex-friend Asala.

It all started on Twitter when Ahlam blocked fellow singer Asala, saying that equates to Asala’s “image” in her eyes. When asked about this, Ahlam said Asala is a hypocrite who was spreading rumors about her.

A feud that played out more like a rap beef than anything else, the strange fight between Bushra and Ramadan began and ended mysteriously. Don’t worry, though, we got two hit singles out of it.

Things have always been tense between Sherine and Amr Diab because of the perpetual competition between them in the pop music scene.

A while back, though, Sherine took it a step further and insulted Amr Diab while performing by saying that “he’s past his prime”. Diab’s response was to take a gym video of him working out to prove his youthful energy.

Sherine had apologized for insulting the Hadaba right after the video went viral, but quickly insulted him again after his response.

Sherine’s second feature on this list is interesting because the situation definitely escalated way too quickly. See, sometimes your neighbors have little annoying habits that you just learn to ignore. Other times, you just have to sue them for damages.

That’s not the only thing that went down there. It’s reported that both parties exchanged some strong language (read: swears) through text. Both are on okay terms now.

If you thought the feuds on this list were ridiculous, then you haven’t seen anything yet. Remember when this music composer had a fight with a literal puppet? You might be shocked to know that, no, that wasn’t a dream.

Amr Mostafa did start an animosity with Abla Fahita by saying that “it’s a foreign agent meant to destroy the youth’s manners and morals” through humor.

Thankfully, this semi-feud was resolved behind the scenes and Mostafa appeared on Abla Fahita’s now-cancelled show.

The next time you think you may have acted a little out of proportion, don’t worry. Others have done it too.