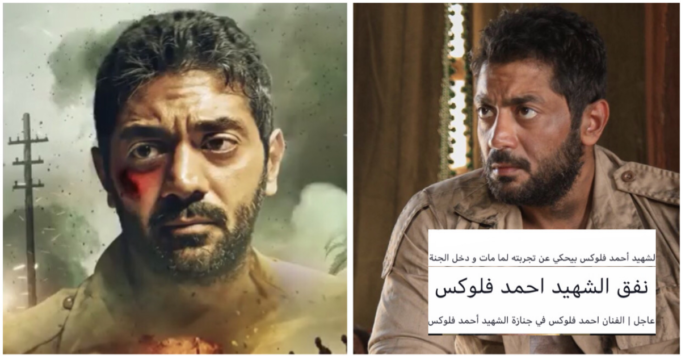 For the past couple of weeks, most of the social media platforms; from Facebook to Twitter, have been witnessing a heavy wave of sarcastic criticism directed at Egyptian actor Ahmed Falawkas.

If you scroll down your timeline, chances that you’ll find a meme or two – or a little more than that – starring Falawkas, are pretty high. And if you’re one of those people who haven’t caught on the trend yet; let us briefly explain where it’s all coming from.

In June 2019, Egyptian war movie “El-Mamar” was released. And needless to say, it gained a lot of success between audience and critics. But still, not everybody got to see it at that time.

However, in celebration of the Egyptian army on the 6th of October, many TV channels premiered the movie for everyone to watch and enjoy.

And that’s around the time when the Ahmed Falawkas trend started spreading even more than it did before.

In “El-Mamar“, Falawkas portrayed an Egyptian military soldier who had a pretty tough personality. And even for the whole time he was captivated in the movie by the Israeli forces, according to the plot line, he showed traits of leadership and most importantly, quick temper.

Moreover, the reason why people picked up on those traits and decided to roast Falawkas online is how they noticed that he’s still too hung up on the character he played in the movie.

And that he’s acting, talking and maybe even walking like his character in the movie. As if he’s really an Egyptian soldier. Not to mention the way his facial expressions are now kind of serious and angry, most of the time.

Which mostly showed in the promotions, interviews, press conferences, and the social events the cast was gathered up in while promoting the movie.

The question here is: Is Falawkas really overreacting or are people just loving the new trend and want to keep on creating and sharing memes to the point that the whole thing went too far and therefore; developed into an overreaction from their side?

We honestly think that first of all, social media is social media. A huge part of it is the trends and memes created on things and people who do even any minor or unmentionable stuff; just for the sake of a good joke. And we feel that as long as it isn’t harmful, celebrities have gotten used to it. Which is good!

But when it comes to Falawkas; all we’re thinking about is that maybe he isn’t overreacting? Maybe that’s how he is? Like, There’s a reason why we wouldn’t exactly know…

We’re not asking people to cut him some slack but really, if you look at any of Falawkas’ works or public appearances, you’ll notice that he has always been that way. He was never “the funny humorous guy” or the celebrity who is out there on the internet or is close the people, in any way.

Even in this video where he talks about his playful son with Anushka in a fun interview; he’s still holding the “serious guy” attitude and doesn’t even laugh or smile as often as anybody usually would. Keeping in mind that interview was back in 2018, and had nothing to do with his recent movie.

So whether the character influenced him a little too much or if he has always been like that, we feel that the whole trend and the amount of memes done over it had gone a little too far.

And while we understand where most people are coming from, with Falawkas appearing to thicken his voice and sound a bit forcefully serious as he talks about the movie and his role; still, we think that the trend is spreading just for the sake of it.

Which is why if Falawkas really overdid his performance, for example, or the way he acted after the release; then maybe so is the internet that has been talking about this for ages already.

On another note, it really seems that Falawkas may or may not have caught on it and got upset because a couple of his colleagues and friends have posted about it on their personal Facebook accounts.

Both Egyptian actress Nashwa Mostafa and director Tamer Hamza have called for “the bullying” to stop because it became “silly” and “unnecessary“, as they stressed on this being totally disrespectful.

While we’re not really sure that this is considered bullying, we feel that yes, as we said, it had gone too far for all the wrong reasons. Because those sorts of jokes could be fine if said and stressed on once or twice; but not for almost a month now.

What do you guys think? Should the trend stop because people are overreacting and it’s been overused and is turning into pointless criticism or do people really have the right to express their opinion even if it’s through memes that could sometimes be hurtful?