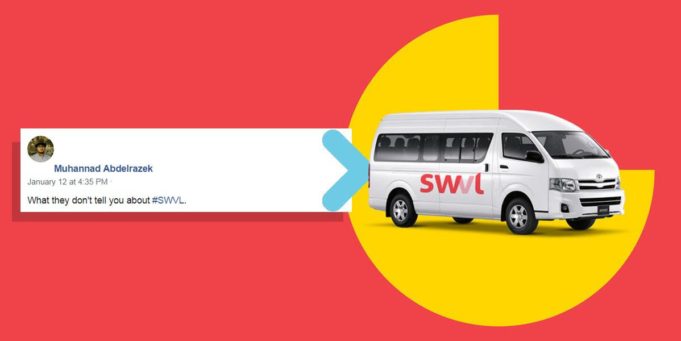 For those who don’t know, SWVL is an Egyptian transportation startup that launched in 2016 and worked under Careem‘s supervision for some time. It connects users with private buses which they can book through an online application.

This all started when one of their previous employees named Muhannad wrote a Facebook status about his experience in SWVL titled “What they don’t tell you about #SWVL“.

In his post, Muhannad tells the story of how he got fired from the company, basically because he posted a meme on Slack lightly complaining that the internet is unstable.

The internet the company is obligated to provide to the employees for them to do the job the company asks of them.

That was only the tip of the iceberg. In the post, Muhannad proceeds to tell how he was fired in a meeting that he didn’t even attend. During this meeting, the CEO threatened that he will fire anyone that complains and if everyone leaves, he will just “hire a new team from Pakistan”.

It didn’t stop there though…

The cherry on top of this bureaucracy cake was when SWVL’s HR told another company that wanted to hire him not to due to his poor work ethics. Which eventually, of course, cost Muhannad this new job opportunity.

Muhannad’s post encouraged other ex-employees to share their own struggles with SWVL, turning it into a horrifying yet enlightening thread of “What they don’t tell you about #SWVL“.

Here are some of the struggle stories that shocked us and disappointed us in the company the most: 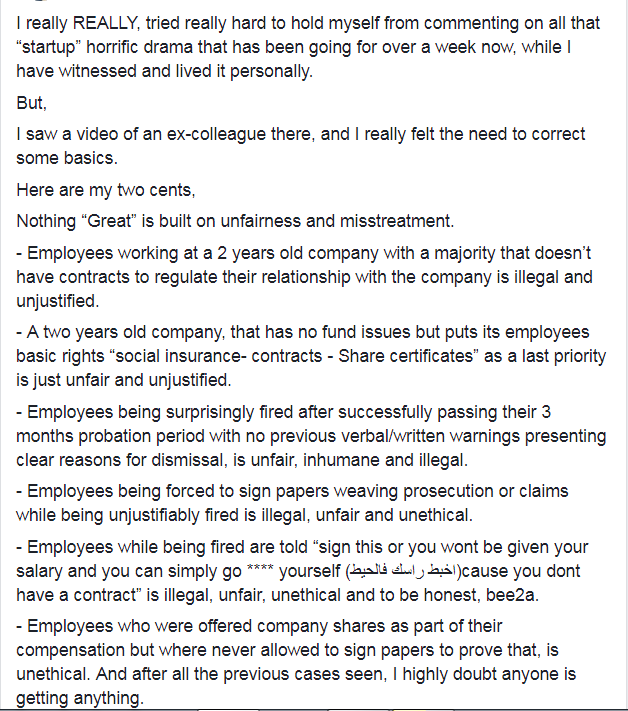 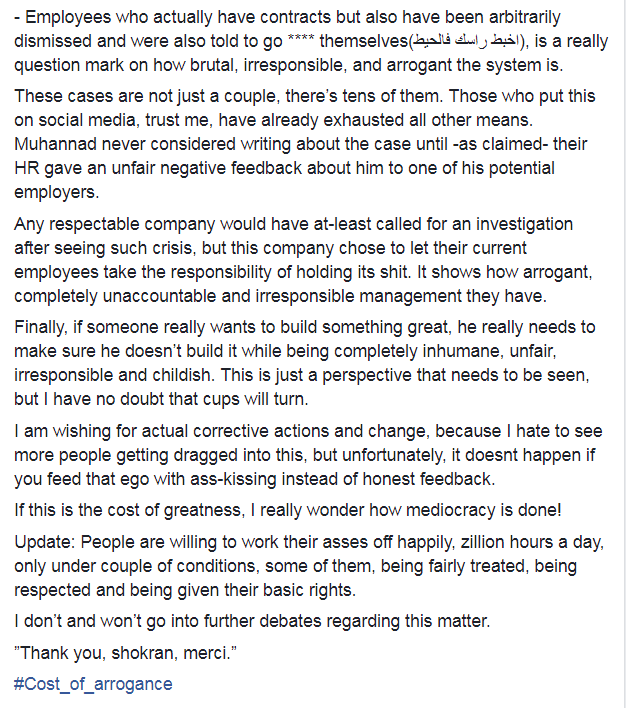 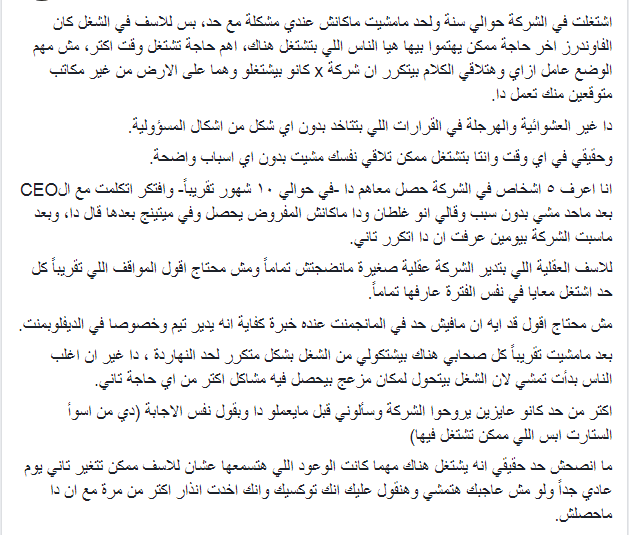 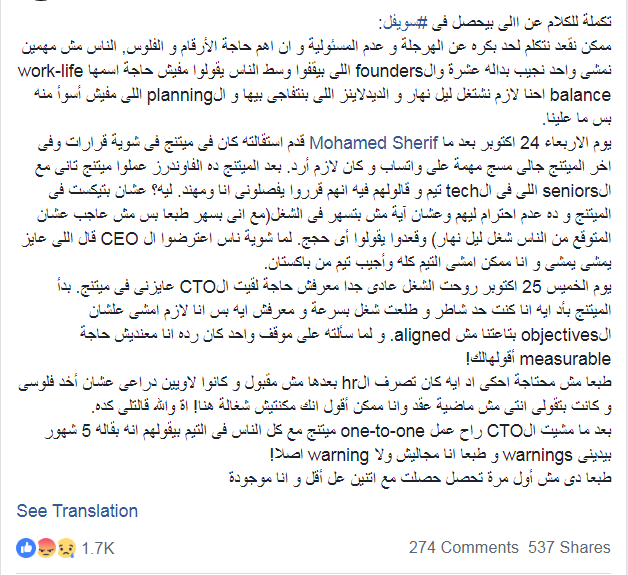 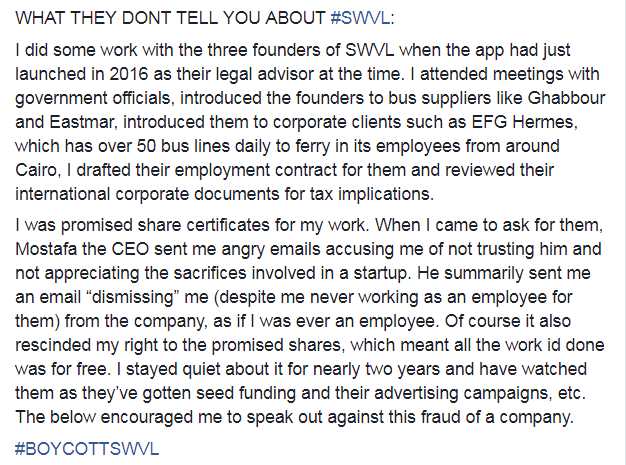 Others took it to Glassdoor to express their opinion and tell their stories with SWVL. These are just some of the reviews we found: 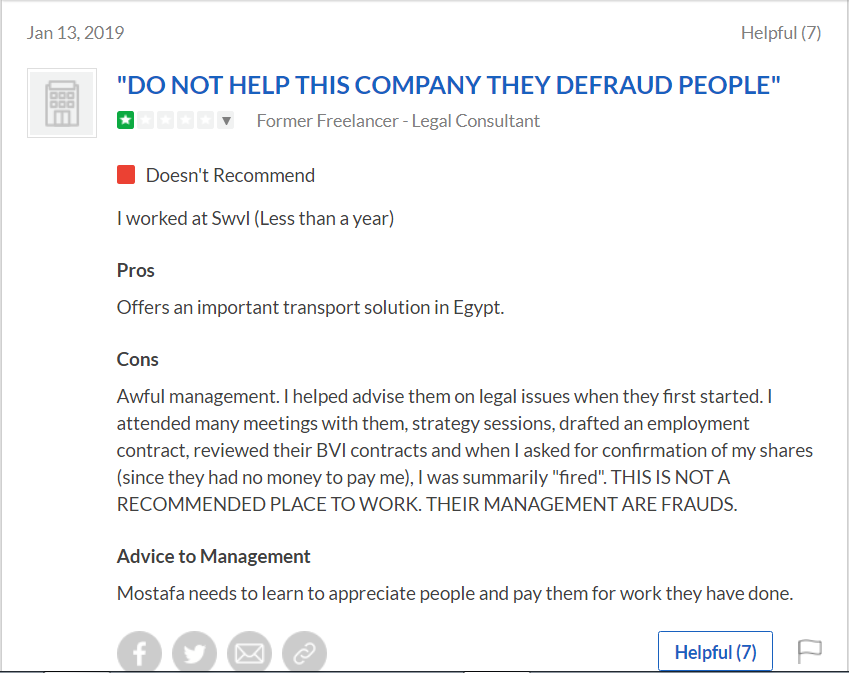 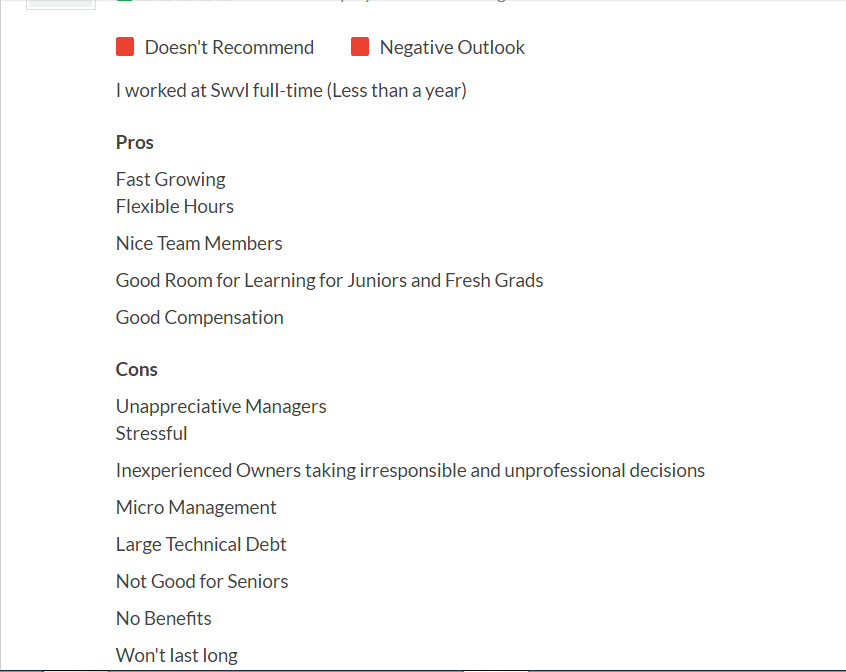 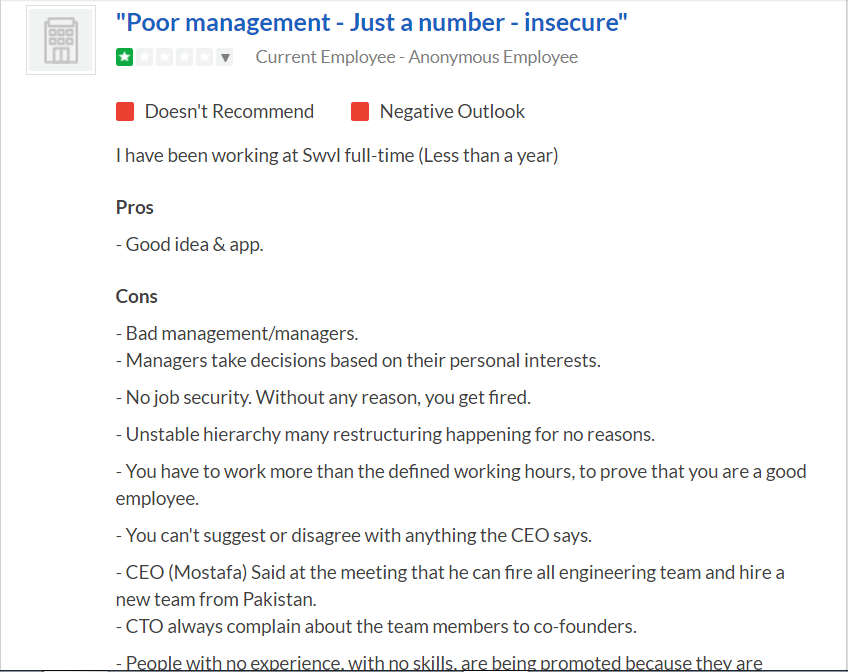 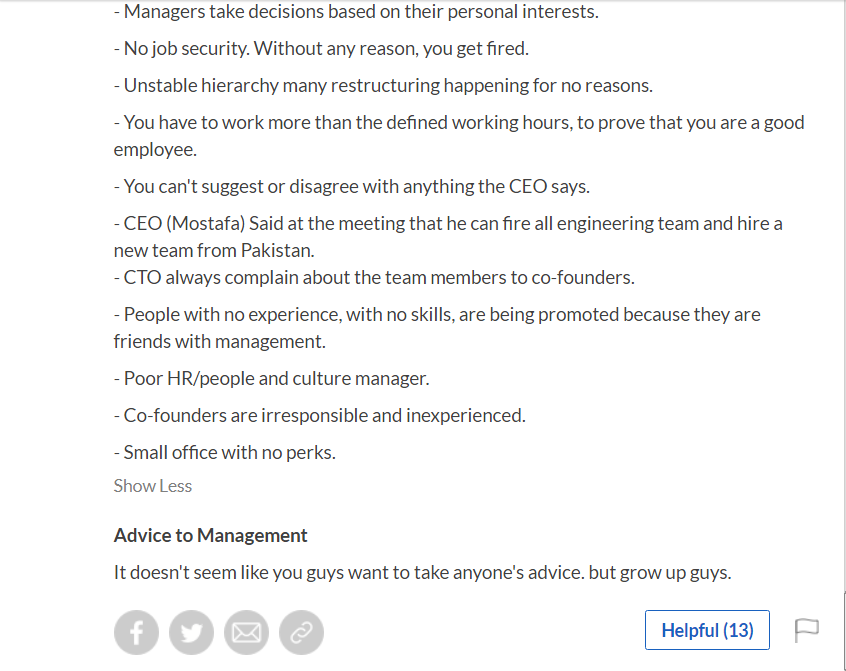 That’s a whole lot of cons… 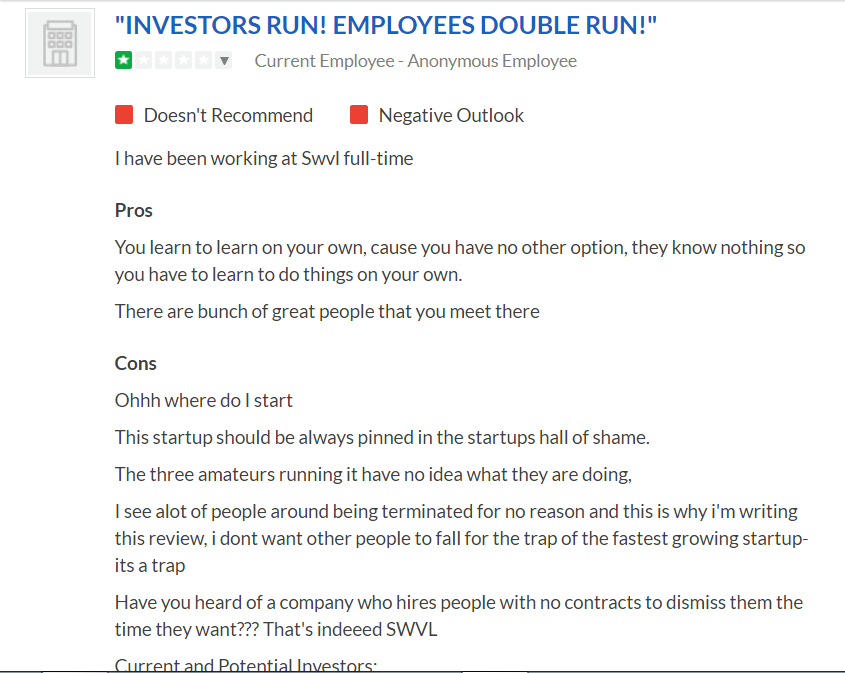 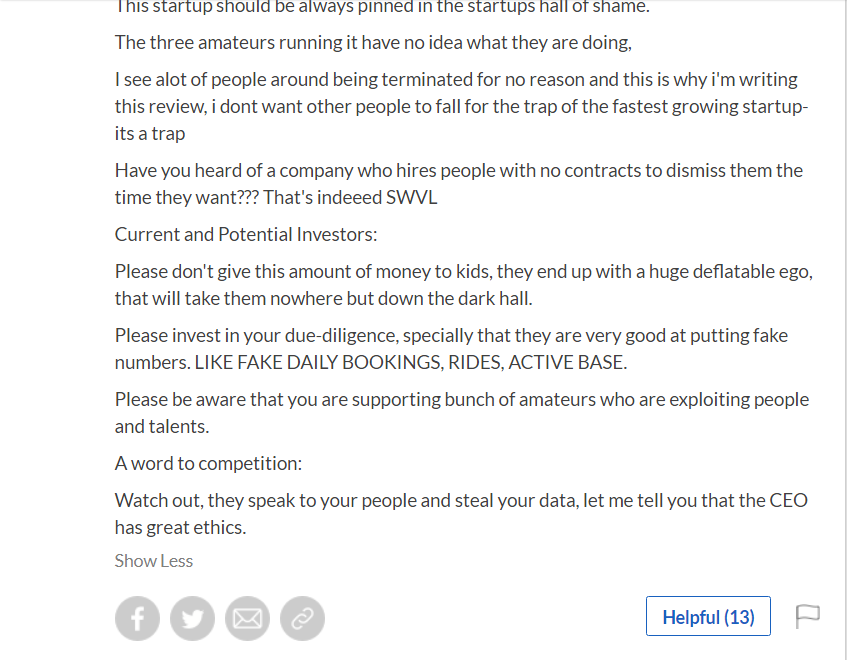 Hiring without contracts, fake bookings, stealing data from competitors, what else is left?

The company did not officially reply to these allegations. Their marketing manager posted a Facebook video addressing the issue, which he deleted shortly after. However, it was later re-uploaded on Facebook so we were able to find it.

The highlight of the video is Sokkar, SWVL’s Marketing Manager, admittedly bragging to the fact that the company works its employees under inhumane work conditions and justifies it by calling it “the cost of greatness”.

He also casually mocks the concept of work-life balance. As if it is a privilege to want to have a life of your own while sacrificing your life for the greater good of the startup!

So he is basically saying ‘Yes, we enslave our employees and we are proud of it.’

Something that also grabbed a lot of attention was a no-hire list that someone made in their personal blog.

Apparently, after seeing how people who have been wronged by SWVL started criticizing the company’s system in a Facebook group, the blogger took it upon himself to create a no-hire list.

This list consists of the names of people who -in his opinion- negatively spoke of their previous employers so they apparently should not be hired anywhere else.

This later generated into an idea for a group for CEOs and employers so they, too, can complain about their employees.

Apparently, some people believe that ‘work-life balance’ is nothing but a myth and attack those who are complaining about being ripped off, mistreated and fired!

Previously, we had posts of those people supporting the idea of working yourself to the nail for the sake of the ‘start-up glory’.

However, after we showed their point of view, they requested their posts to be deleted, though they were originally public. So out of respect, we deleted them.

However, we can’t help but wonder if there is some sort of pattern where startups somehow are considered war zones or something.

This all brings us back to the preconceived idea that just because you are working in a startup, you have to slave away for no payoff whatsoever just for the sake of the bigger picture!

Dedication is required and all. However, not appreciating your human workforce is the stupidest thing you could do to your business.

A company, startup or whatever, is obligated to give as well as take. All the efforts invested into it are working only in the company’s favor and will only reflect on the company. The employees, however, who do all the work, will not be rewarded unless their employers reward them.

You can build an empire on people’s loyalty. However, without it, no amount of money or resources will get you anywhere. 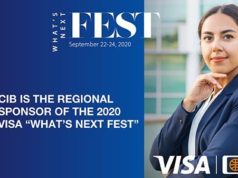 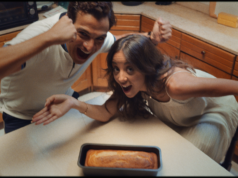 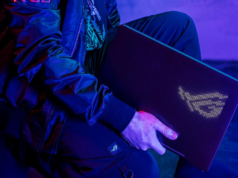