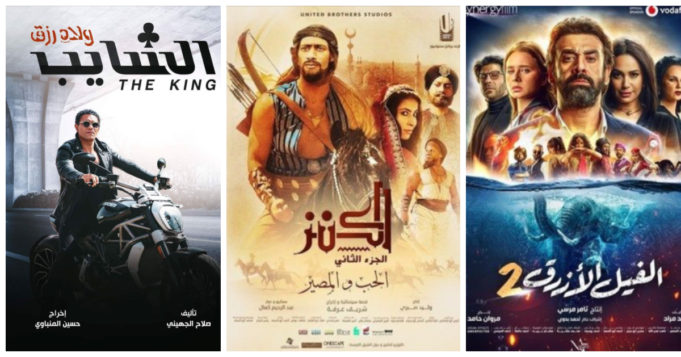 For a couple of years now, we’ve been seeing obvious progress in the Egyptian cinema industry. As Egyptian producers begin to take more risks and steps towards the future of modern cinema, we’ve actually been witnessing some good material.

One of those steps is making Egyptian movie series revolving around the same characters with storyline continuations and spin-offs.

Basically like the Marvel cinematic universe, if you will.

It’s true that some people are already doubting the Egyptian abilities but from what we’ve been seeing so far, maybe – just maybe – this will work out nicely.

In 2014, we witnessed one of the greatest modern book to film adaptations when Ahmed Mourad’s “El-Fil El-Azrak” or “The Blue Elephant” hit theatres.

Directed by Marwan Hamed and starring Kareem Abdel Aziz and Khaled El-Sawy; we all enjoyed new cinematic excellence on screen.

You know a film is really good when the bookworms actually see it that way too. Because not every movie lives up to the book it was based on. But fortunately, that was the case for “El-Fil El-Azrak“.

We don’t know if releasing a sequel was the plan all along or was it just a natural reaction to how the first one was highly praised in terms of storyline and acting.

But it’s safe to say that “El-Fil El-Azrak 2“, the first ever modern Egyptian attempt at a sequel, did so well. Especially with the additions of Hend Sabri and Eyad Nassar’s stunning performances.

“El-Fil El-Azrak” is also going to get a 3rd part with an extremely intriguing storyline. The one we’ve all been waiting for, where Yehia is Nael!

As for “Welad Rizk‘s” sequel, maybe it didn’t do as well as “El-Fil El-Azrak“. But that doesn’t mean it was, in any way, bad.

The difference was that “El-Fil El-Azrak 2” was a continuation of the mysterious and intriguing tale. While “Welad Rizk” was more or less the same idea, with new characters and different settings.

That being said, we all recently learned that it’s not only about a sequel, because director Tarek El-Eryan confirmed that they’re indeed working on a whole series for “Welad Rizk“.

Which will include Asser Yassin as the villain with his own movie in the series named “El-Shayeb“. Needless to say, this one is highly anticipated.

It’s introducing the first ever “Egyptian Cinematic Universe” as well as an actual villain in modern movies. Not to mention that it’ll be a prequel to “Welad Rizk 3“, which is also highly anticipated.

Finally, we need to talk about “El-Kenz – Al-Hakika w Al-Khayal“. The Mohamed Ramadan, Ruby, Amina Khalil, Hend Sabri and Mohamed Saad’s movie was really a hit when the first part was released back in 2017. Because the story was unusual, everybody was drawn right in!

When the second part came out in 2019, it didn’t do that well even though it was highly anticipated.

But again, not because it was bad nor didn’t it live up to the expectations and high bars. Or, maybe a little actually…

However, we’d like to think that the real reason is the timing of the release that put the movie face to face with some of the biggest films of the season. The ones we just mentioned as well as “El-Mamar“.

So to wrap this up, it seems that yes, the Egyptian attempt at making movie series and introducing an Egyptian cinematic universe will indeed work out. And we can’t wait to actually see more of them come to life!