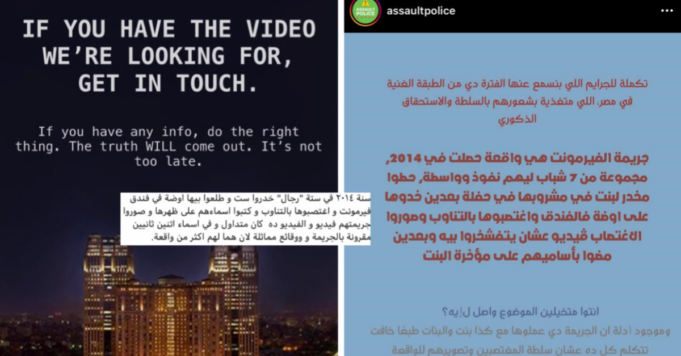 To the people who thought that outing sexual harassers and taking part in the anti-sexual harassment movement which sparked up following the Ahmed Bassam Zaki case, was just a ‘trend‘, well, we’re pretty sure you’ll be rethinking everything after you read about the Fairmont gang-rape crime – commonly referred to as the “Fairmont Incident”.

Over the past couple of days, all social media platforms were yet again on fire because of a new horrible case that is in need of thorough and immediate investigation.

This case concerns gang-rape allegations that date back to 2014 where a group of five affluent guys were said to have drugged a girl after a tea dance party at the Fairmont hotel.

Not only did they drug her, but they also allegedly gang-raped her, and even got it on tape which, according to a number of surfacing anonymous confessions, has been watched by a number of people so far.

The details of the incident are absolutely bone-chilling as it was said that they even went as far as signing their names so proudly on the victim’s private parts after they were done with her.

Rumors then spread around about this not being the only time the same five guys have committed such an unspeakable crime in the same exact manner.

Do you see now why the movement that many have referred to as a trend was so important?

This story is beyond everything you could imagine, and we would have never in a million years learned anything about it if it wasn’t for the brave women that stood together to convict a sexual predator exactly a month ago.

This movement led thousands of Egyptian women to finally tell their stories and expose their harassers despite everything. And now look where we are – on the verge of opening up a very important investigation in hopes that the rapists don’t get away with it. Just like we did last time.

It’s honestly so frustrating to think there are people out there who do not believe that such awful crimes regularly take place in their pious Egyptian society.

Well, surprise, sometimes some of the Egyptian men (and even women, too) who tend to speak in the name of religion and are quick to blame the victims are usually the ones who either commit such crimes or support them by protecting the harassers.

So the bottom line is if you think this doesn’t happen in Egypt, we’re here to tell you that it does, indeed. And that now is the time to come forward and put every single rapist and harasser behind bars. This is not the time for being silent about such matters or even ‘supporting‘ the victims in silence.

If this story is 100% accurate and true with evidence still out there, this generation will be single-handily uncovering more scandals and crimes and the people in question will be imprisoned sooner or later.

Because this, in itself, is proof that sexual harassment – whether verbal, physical or even online – as well as rape and now gang rape happens every day in our society to so many women from different social backgrounds and they’re just too afraid to speak up.

But now, the law is in their favor and they – actually all of us – have the responsibility to expose such crimes and make rapists as well as rape apologists afraid for their lives when they even begin to think about assaulting a woman or discrediting her stories.