Identity Magazine
Home Opinions The Girl Who Killed Her Rapist: A Wake Up Call For Us...
Facebook
Twitter
Google+

Update 1/8/19: The court has denied the defendants request for appeal. For the second time, she will remain under imprisonment for 15 more days.

Amira Ahmed Rizk is the 15-year-old who was detained by Egyptian authorities after she willingly confessed killing a man who attempted raping her under weaponry threat.

We all heard the story, right?

But for those of you who haven’t, Amira is a high school student who agreed to meet with a guy friend of hers earlier this month at the Giza Zoo thinking it was a day just like any other day.

Little did she know, the guy had other plans for her. He stole her phone “as a joke” and when she tried calling him, an anonymous guy answered claiming that he found the phone and asked her to meet him in order for her to get it back.

When she did just that, the guy-a micro bus driver- took her to a deserted spot and attempted raping her under the threat of a knife. At first, Amira tricked him with consent and when he was off guard she stabbed him 14 times.

Later on, she headed to the nearest police station and confessed the whole thing hoping for a speedy release. Since it is obviously a clear-cut case of self defense. HOWEVER, the young girl was and still to this moment, detained in a juvenile detention center under the ongoing examinations and investigations.

Here’s a video demonstrating the latest details of the case after forensic results came out!

Naturally, many offered their full support to Rizk on social media, with the hashtag #“فتاة_العياط“; calling for her immediate release! 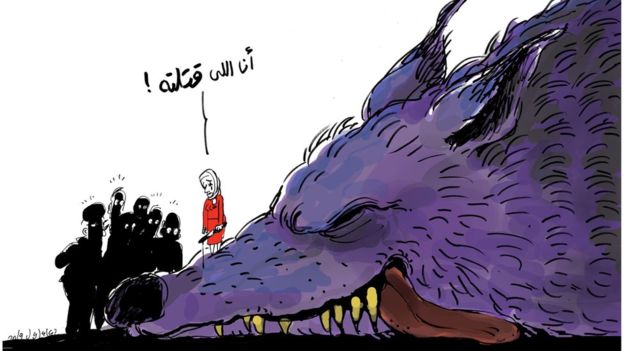 Others, on the contrary, expressed that Amira is partially guilty for meeting up with strangers without the knowledge of her parents and for being a minor as well.

But does this justify raping?

Shockingly, recent DNA results showed that there might be a chance another person was present during the incident. More importantly, words have been flying around that this case might now turn into a first degree homicide and all the benefits of a self-defense case might drop.

In other words, Amira might face up to 7 years or more of imprisonment!!!

Though, this is yet to be proved by the public prosecutor and further investigations…

Guilty or not, this is not the only question that is yet to be answered here..

The way we see it, this whole thing is just a tiny part of something bigger that we, as Egyptians, need to address.

For instance, in cases similar to Amira’s, is prioritizing her confinement over psychologically rehabilitating this youngster who had to go through such traumatizing experience really the right way to go about this?

More importantly, in light of the recent events that have to do with the “harassment” issue everyone was talking about during the Africa Cup of Nations.

Also, regionally, the questionable case of Saad Lamjarred, the Moroccan singer who is an accused rapist that is now being perceived not just casually, but also sympathetically. For more details, read our article about it!

How are such cases contributing to the naturalization of sexual abuse towards women?

Are we really sending the right message to all the sexual predators out there?

Or, are we just going to keep calling for “second chances?”

Legally, we heavily support the ongoing human rights campaigns calling for the amendments of the constitutional laws basically stating that “sexual harassment is not conclusive justification for a life-threatening situation that requires violent measures of self-defense.”

We are seriously tired of the deeply rooted hatred and marginalization of Egyptian women. Is it about time we lose all faith in a world where we actually respect women? In a world where women, the victims, are supported instead of blamed?